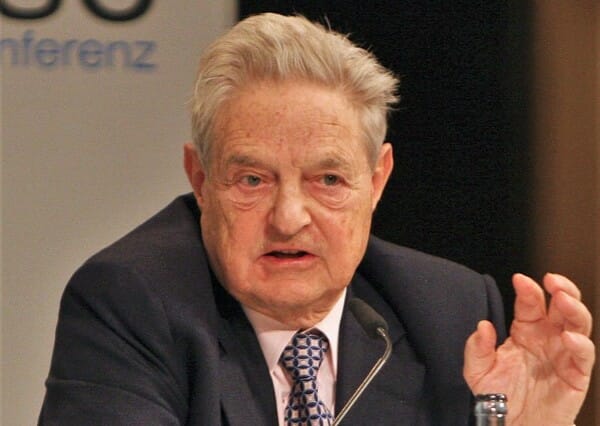 Left-wing billionaire George Soros is promising $220 million for groups that promote "racial justice," confirming him as, according to Forbes, a "major villain to right-wing groups who decry his support for 'terrorists.'"

"Racial justice" was a focus of failed Democratic presidential candidate Bernie Sanders, who sought to turn America into "a nation that affirms the value of its people of color" by addressing five types of violence against "black, brown and indigenous Americans," physical, political, legal, economic and environmental."

His campaign claimed there is "a terrible level of police violence" against unarmed minorities across the nation.

Sanders promised, if elected, to spend billions on jobs and education and eliminate detention centers.

"No more profiteering from locking people up," he said.

While his campaign collapsed, Soros announced just this week a financial commitment to the same goals.

"Soros has long used his considerable wealth — estimated at $8.3 billion by Forbes — to address systemic inequality experienced by communities of color, including Open Society’s launch of a Racial Justice Initiative in 2003," Forbes reported.

The report said $150 million of the new money is to go to five-year grants to black-led justice organizations, including Black Voters Matter and Circle for Justice Innovations.

"Open Society also will make up to $70 million in investments in efforts to advance racial justice, including in cities that are rethinking public safety, 'moving beyond the culture of criminalization and incarceration, and aiming to create safe, healthy, and racially just communities," a news release said.

Alex Soros, a son of George Soros, said it's "time for urgent and bold action to address racial injustice in America."

"These investments will empower proven leaders in the Black community to reimagine policing, end mass incarceration, and eliminate the barriers to opportunity that have been the source of inequity for too long."

The Soros money already has supported the ACLU's campaign to reduce jail sentences and prop up "state organizations led by people of color."

The Jerusalem Post reported the money is coming through Soros' Open Society organization.

The New York Times said the mass infusion of cash "will immediately reshape the landscape of black political and civil rights organizations, and signals the extent to which race and identity have become the explicit focal point of American politics in recent years."

The Times reported Patrick Gaspard, the foundation's president, said: "There is this call for justice in black and brown communities, an explosion of not just sympathy but solidarity across the board. So it’s time to double down. And we understood we can place a bet on these activists — black and white — who see this as a moment of not just incrementalism, but whole-scale reform."

The report noted part of the impetus behind the "justice" campaigns is the fact that Democrats "are desperate to defeat President Trump," combined with "an extraordinary protest movement that has pushed many to action."

Heather McGhee, a foundation board member, said in the Times: "It frees up time and ensures that once the corporations stop putting up statements and small-dollar donations stop, they can keep fighting this fight. If you take the blinders of racism off, of course you should be investing in black leadership — and these organizations shouldn’t be worrying about money."

In 1994, Soros pledged funding for criminal justice reform. And in January, he pledged $1 billion for a "global university" to "fight authoritarian governments and climate change."

Soros repeatedly has called Trump a "con man" and "narcissist."