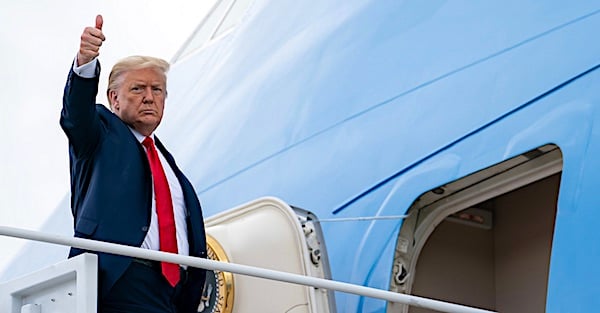 He may be the most optimistic American abroad, and when reached by phone Friday from Rome, the former speaker of the House offers an increasingly rare message to stateside Republicans resigning themselves to an ugly November:

The charts—economic and medical and presidential—are far from promising at the moment. A recession looms while cases of COVID-19 spike and the president slips further downward in the polls, but Gingrich starts with a different model less than four from the election, a simpler one.

“Nobody has a clue,” he told RealClearPolitics. How can the polls tell anyone anything, he added, when the “elite media has been so unrelentingly hostile to Trump that an amazing percentage of people don’t want to even say his name.” In other words, he believes in a silent majority.

So does the president, who regularly references that supposedly tight-lipped electorate on Twitter and at his rallies, contrasting them with the “unhinged left-wing mob.” Animating this voter bloc, then, is the task of 2020. As Gingrich sees it, Trump only has to do a few key things to keep the White House.

First, he must put the economy back on track—“people have to have a feeling by September that we are going to come out of this.” (Gingrich suggests a payroll tax cut.) Second, he needs to manage the pandemic—Gingrich says that Italy got the virus under control “and that’ll happen in the States.” Third, he ought to double down on the culture war—Gingrich says do it now.

That last suggestion is the one directly under Trump’s control, and something Gingrich, who pioneered robust populist messaging to launch the Republican Revolution of 1994, predicts “will be substantially to his advantage.”

But can a culture war really be won right now?

Millions have protested against police brutality since the death of George Floyd in May, and a majority of Americans support those demonstrations. Both Republicans and Democrats have taken up the issue of police reform in Congress. The left has gone even further by pushing to defund the police and embracing demonstrations that end with toppled statues of once-revered figures: Asked about monument destruction recently, House Speaker Nancy Pelosi simply responded that “people will do what they do.”

And that is exactly why the culture war campaign is in order, according to Gingrich.

Even when silent, he says, the majority is watching. They have watched individuals fired for wrong opinions, such as the Boeing executive who was forced to resign after an op-ed he wrote opposing women in the military surfaced -- more than three decades after the fact. They also watch when the powerful are forced to offer public apologies for espousing the “wrong” opinions, such as Drew Brees of the New Orleans Saints, who quickly walked back comments about kneeling for the national anthem.

Gingrich sees this as an opportunity for Trump to draw a contrast between those looking to make a positive social change and others trying to capitalize on unrest to accrue power. “A very simple distinction,” he said by way of example, “is between Black Lives Matter, which is a terrific slogan, and the Black Lives Matter organization, which is a Marxist, anti-American group.”

Trump has already done this to a certain extent. Three days after condemning “a new far-left fascism” during his Mount Rushmore address, he told RCP in the Oval Office that, in fact, “we are in a culture war.” It’s an argument he feels comfortable making. He blended cultural and political appeals in 2016. And Gingrich wants him to do it again, but differently.

Because of “the hostility of the elite media,” Trump has “got to have a more aggressive style than Nixon or Reagan.”

This won’t be a problem for the president, who attacked NASCAR and the Supreme Court all in the same week. What will be difficult--what has always been difficult for this president--is narrowing his field of fire. “The question is,” Gingrich explained, “can he stay focused?” And focus is necessary because Joe Biden, the former vice president who secured the Democratic nomination on the strength of his comparative moderation, won’t be easy to demonize.

Here Gingrich has more advice for the Trump campaign, whom he speaks with on a regular basis. “Don't talk about Biden,” he argued. “Talk about Biden, Pelosi, and Schumer. It’s the trio, it is what they would do collectively if they had the White House, the House, and the Senate. I think the more people hear about that, then Biden’s votes will shrink very dramatically.”

Not all Republicans would agree that a more aggressive Trump is what’s needed. They worried about his pugnacious populism when he first ran, first won, and throughout his first term. Back on his heels during the pandemic and slipping in the polls, though, Gingrich sees aggression as his last best option.

To force Biden onto uncomfortable terrain, he suggests an attack on the Democrat’s left flank. While the presumptive nominee branded himself as a moderate to win the primary, since then he has adopted a historically progressive platform to appease the more extreme elements of his party. To Gingrich, this looks like a weakness, and the Supreme Court just provided a perfect opportunity to exploit it, he said.

The court upheld an exemption to Obamacare’s contraception mandate in a case filed on behalf of the Little Sisters of the Poor last week, an order of Catholic nuns. Biden quickly released a statement promising to end that exemption. What more could Trump have asked for, Gingrich asks. Biden is Catholic, Biden needs Catholic voters, and “Biden announces that he would sue the nuns again over contraception?”

“If he is going to stay with AOC and Omar and the rest of them, he has to be a radical,” he argues. “And if he isn’t a radical, he won’t be legitimate” in the eyes of the party’s left wing. And so, the logic of the culture war campaign goes, maintaining legitimacy will force radicalism to the forefront. This, Gingrich says, is how Trump wins a second term.