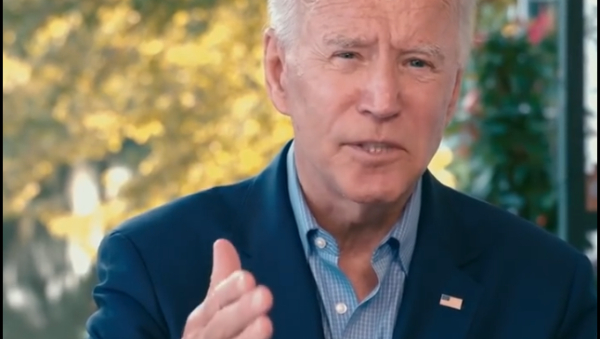 Biden, in the 97 second speech, omitted the Creator in his abbreviated version of the Declaration of Independence, Gingrich said in a series of tweets.

The presumptive Democratic presidential nominee acknowledged all men are created equal, the former Georgia lawmaker said, "but in the modern secular left fashion forgets to mention that they are created by God and their rights come from God."

He then "defames" Thomas Jefferson, limiting the Founding Father and the founder of the University of Virginia to one idea, a slaveowner.

Biden, said Gingrich, reduces the Union's war, which led to abolishing slavery, to "ravages" when the Union Army marched to the Battle Hymn of the Republic singing "as Christ died to make men Holy let us die to make men free."

He then skipped the "killing volunteer civil rights workers in Mississippi, the courage of the sit ins, Eisenhower sending in US Army to integrate Little Rock schools against a Democratic Governor, JFK fighting segregation in Mississippi and Alabama to one ugly symbol, Bull Connor."

He skipped the massive 1963 rally at Lincoln Memorial, Martin Luther King Jr.'s "I Have a Dream" speech, the national holiday to honor King and the memorial to him on the Mall

Biden's America, Gingrich said, is "the marginalized, the demonized, the isolated, the oppressed."

So, "after 48 years in Washington, Biden will now fix everything he failed to fix for nearly a half century," Gingrich said of the former vice president.

"Apparently in Biden's America there has been no progress."

And 39 of the 100 largest cities have black mayors.

"Of course none of the 851 offices held by African Americans can exist in Bidenland, because Bidenland is dominated by 'the racism that has torn us apart," Gingrich said.

"Imagine how much more positive he would be if he had served in President Obama's administration!"

Meanwhile, top media outlets portrayed President Trump's homage to the Founders and its greatest presidents as a "dark" speech that stoked the "culture wars."

The Wall Street Journal editorial board had a different take, calling Trump's speech "one of the best speeches of his Presidency."

The Journal said the "chorus of independent media voices understands that Mr. Trump is trying to rally the country in defense of traditional American principles that are now under radical and unprecedented assault."

Addressing the claim that his speech was "dark," the Journal said that in "most respects Mr. Trump's speech was a familiar Fourth of July ode to liberty and U.S. achievement that any President might have delivered in front of an American landmark."

Trump said: "No nation has done more to advance the human condition than the United States of America. And no people have done more to promote human progress than the citizens of our great nation."

The Journal insisted that contrary "to the media reporting, the America Mr. Trump described is one of genuine racial equality and diversity."

"He highlighted the central ideal of the Declaration of Independence that 'all men are created equal.' As he rightly put it, 'these immortal words set in motion the unstoppable march of freedom' that included the abolition of slavery more than a half century later."

In any other time, the Journal said, "this paean to American exceptionalism would have been unexceptional."

But this year even Mr. Trump’s speech backdrop, Mount Rushmore, with its four presidential faces, is politically charged, the paper noted. And Trump's "great offense against the culturally ascendant progressives was to defend these presidential legacies."

The Journal said the characterizing of his speech as divisive proves his point.

It was only divisive, the paper said, "if you haven’t been paying attention to the divisions now being stoked on the political left across American institutions."

"Mr. Trump had the temerity to point out that the last few weeks have seen an explosion of 'cancel culture — driving people from their jobs, shaming dissenters, and demanding total submission from anyone who disagrees.'"

Together these recent incidents amount, the Journal said, to a "left-wing cultural revolution against traditional American values of free speech and political tolerance."

"And he called for Americans not to cower but to oppose this assault."