Corinth, like America, was steeped in immorality, idolatry and hostility to the simplicity of the Gospel. Paul pulled no punches in boldly communicating truth accompanied by signs and wonders arresting the attention of multitudes.

"My speech and my preaching was not with enticing words of man's wisdom, but in demonstration of the spirit and of power, so that your faith should not stand in the wisdom of man, but in the power of God" (1 Corinthians 2:4-5).

It should be no different today!

May we see once again the church rise to impact our culture the same way she did in the book of Acts where Christians "turned the world upside down" (Acts 17:7). 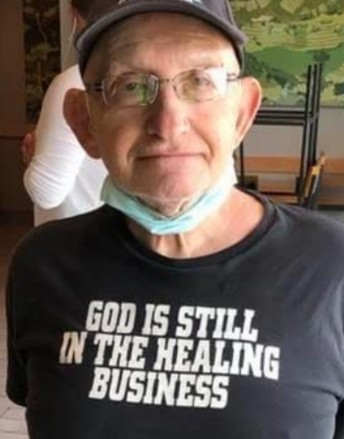 A few days ago I walked into a coffee shop and noticed an older gentleman (pictured above) with a bold declaration emblazoned on his shirt. After I inquired of him, he literally bolted from his seat and gushed the account of how Jesus Christ totally healed him of three cancerous tumors. The healing was verified by a medical doctor, and he wants the world to know: "'Jesus Christ is the same yesterday, and today and forever' (Hebrews 13:8). He heals today! Align with His revealed will in Scripture. The days of healing and the supernatural are NOT over! Look what He did for me!"

Arriving for our church service, I was grabbed by a man out of breath, looking pale, begging me to come quickly, saying haltingly, "It's your wife's dad, he's …" I instantly knew what that might mean.

In the meeting room a small knot of people were huddled around the prostrate form of my father-in-law who laid unconscious on the floor.

The ambulance arrived, and the EMT workers moved with the speed of NASCAR mechanics. As the paramedics began loading the stretcher into the ambulance, a nurse who attended our church touched my arm, her face ashen, "We couldn't find a pulse, Larry." My wife asked them, "Will my father make it?"

While Doris accompanied her mother on the ambulance ride to the hospital, I called the church to urgent prayer. We joined in declaring the promises of God concerning the healing of the sick. We ended with an anthem of thanksgiving for God's divine intervention.

Shortly thereafter, when we gathered at the hospital with the paramedics they told us something amazing. As they worked on him in the room he somehow revived, and medical tests then showed there was nothing wrong in spite of the frightening collapse and on-the-spot diagnosis!

Shortly thereafter he was back out on the golf course playing his weekly round as we gave glory to God for supernatural intervention. This really happened and I wrote the event down to share it, glorify God and encourage others.

Give Expression to the Impression

On a recent podcast, we heard from a premier evangelist in the Assemblies of God network who regularly moves in miracle ministry and equips believers to do likewise.

One of the things that Joe Oden emphasizes in training people for relational evangelism and stepping out in supernatural ministry is to act in faith when God gives you a holy "nudge" to pray for somebody. My daughter has modeled this for years with servers in restaurants (when they're not busy, of course!). Joe shared on the podcast a recent divine appointment at a Subway that is a real "jaw dropper."

A number of years ago, I was speaking in my hometown of Cleveland when smack-dab in the middle of my message I sensed a "tug" in my spirit to pause and issue a compassionate appeal that a girl present and pregnant was pondering an abortion and that she needed to change course immediately.

"I'm not trying to embarrass you, but be obedient to God who's telling you that He loves you and He loves your baby and He wants to help you, but you've got to be brave and not proceed down this path."

That's all I said. I then resumed my presentation and forgot all about it until I concluded, gave a gospel invitation; and when about 15 people came forward and I was just about to direct them off to the side for counseling, God brought that appeal back to my attention!

"Before you make your way to the side, could I ask who is the girl contemplating the abortion?"

I tried again. "This is not to embarrass you but to give glory to God for what He just did in your life in rescuing the baby you carry."

Deflecting the whisper of the enemy in my mind that I was a fool and made it all up, I took a deep breath and repeated the words a third time.

Just then, off to my right in the small crowd, I saw a scared young woman lift her arm and start to cry. The 500 or more people assembled began to applaud and encourage her as some caring people gathered around her to pray for her as we started a journey that eventually ended up with her giving up the baby for adoption to a precious couple who had been unable to conceive.

To this very day I carry in my money clip the picture of the little boy whom God rescued via that miracle.

Here's the Deal: In these turbulent times, people need to know we serve a living God who is the great "I Am" not the great "I Was!" Let's study afresh Scriptures on healing to build our faith and be emboldened to step out in the supernatural and believe Him to transform lives by the Gospel preached with signs following.

"Is anyone sick among you? Let him call for the elders of the church, and let them pray over him anointing him with oil in the name of the Lord. And the prayer of faith will save the sick, and the Lord will raise him up. And if he has committed any sins, he will be forgiven. Confess your faults to one another and pray for one another, that you may be healed. The effective, fervent prayer of a righteous man accomplishes much" (James 5:14-16).

Larry Tomczak
Larry Tomczak is a cultural commentator of 46 years, Intercessors for America board member, bestselling author and a public policy adviser with Liberty Counsel. His new, innovative video/book, "BULLSEYE," develops informed influencers in 30 days (see www.bullseyechallenge.com), and he has a variety of resources on his website (see www.larrytomczak.com). You can also hear his weekly podcast here.
Everything you wanted to know about Donald Trump
How does the church reach young people? I asked my evangelist daughter
The big lie of America's 'systemic racism'
Women's Lives Matter message goes to 31 nations
Nov. 3 election: The deciding battle of the 2nd civil war
See more...