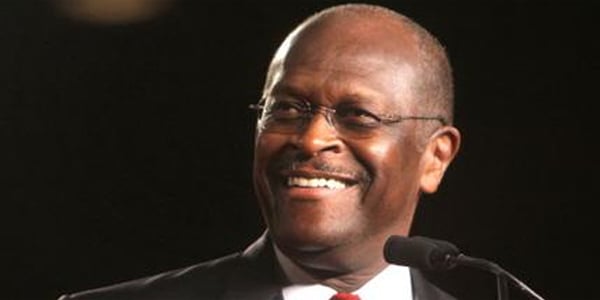 Herman Cain, who brought Godfather's Pizza back from near-collapse before running for the Republican presidential nomination, died Thursday at the age of 74.

He was hospitalized July 1 following a diagnosis of COVID-19. His death was confirmed on his website by Dan Calabrese, who posts on the site and previously had written about the diagnosis.

Cain attended a rally in Tulsa, Oklahoma, for President Trump about two weeks before he was diagnosed. But he likely was not infected at the event because all participants were tested.

Calabrese wrote: "You’re never ready for the kind of news we are grappling with this morning. But we have no choice but to seek and find God’s strength and comfort to deal with it.

"Herman Cain – our boss, our friend, like a father to so many of us – has passed away. He’s entering the presence of the Savior he’s served as an associate minister at Antioch Baptist Church in Atlanta for, and preparing for his reward.

"Romans 2:6-7 says: 'God ‘will repay each person according to what they have done.’ To those who by persistence in doing good seek glory, honor and immortality, he will give eternal life.' By that measure, we expect the boss is in for some kind of welcome, because all of us who knew him are well aware of how much good he did."

Calabrese said Cain was taken to the hospital July 1 in an ambulance after he had trouble breathing.

"We didn’t release detailed updates on his condition to the public or to the media because neither his family nor we thought there was any reason for that," Calabrese wrote. "There were hopeful indicators, including a mere five days ago when doctors told us they thought he would eventually recover, although it wouldn’t be quick."

He said Cain had been generally healthy in recent years but was still in a "high-risk group" because of his history with cancer.

Calabrese noted that most people had no idea that Cain had been a civilian employee of the Navy and "was literally a rocket scientist."

CNBC noted Cain is among the highest-profile public figures in the U.S. to die from COVID-19.

Cain's success as an executive at Burger King led to his appointment as chairman and CEO of Godfather's Pizza. He later became chairman of the Federal Reserve Bank of Kansas City Omaha Branch.

Investigative reporter Sara Carter wrote: "Whenever I would run into Herman Cain he was always so gracious, funny, and kind. I’m going to really miss him. Praying for his family in their time of sorrow. He was a great American."