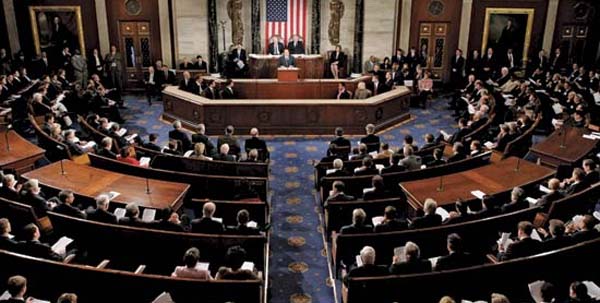 A bill to remove statues of Confederate leaders and figures who advocated for white supremacy from the Capitol passed the House on a bipartisan vote Wednesday, the New York Times reported.

The House voted 305 to 113 to remove the statues as part of a broad effort to take symbols of racism out of public spaces, the Times reported. The legislation was introduced by House Majority Leader and Democratic Maryland Rep. Steny H. Hoyer.

“These painful symbols of bigotry and racism—they have no place in our society, and certainly should not be enshrined in the United States Capitol,” co-sponsor of the bill and Democratic California Rep. Barbara Lee said, the Times reported.

“It’s past time that we end the glorification of men who committed treason against the United States in a concerted effort to keep African-Americans in chains.”

Today I voted to remove confederate statues from the U.S. Capitol. The U.S. Capitol should be reserved for pieces of art that inspire and unite us as a nation.

The legislation explicitly named five statues to be removed from the Capitol, and would require “all statues of individuals who voluntarily served” the Confederacy to be removed, the Times reported.

State leaders are the only leaders authorized by federal law to replace statues in the Capitol, and each state is permitted to have two statues displayed in the National Statuary Hall collection, the Times reported.

Though the legislation is unlikely to be put to a vote in the Senate, 72 House Republicans voted in favor of the bill, the Times reported.

“The history of this nation is so fraught with racial division, with hatred,” Republican Michigan Rep. Paul Mitchell said, the Times reported. “The only way to overcome that is to recognize that, acknowledge it for what it is.”

Republican Senate Majority Leader Sen. Mitch McConnell of Kentucky said the move was “clearly a bridge too far” and an effort to “airbrush the Capitol,” the Times reported. McConnell said the states should decide what statues are displayed in the Capitol, however, he advocated a statue of Jefferson Davis be moved from the Kentucky State Capitol to a museum in 2015, according to the Times.

Speaker of the House, Nancy Pelosi, had four portraits of former speakers removed from outside of the House chamber because they represented the Confederacy last month, the Times reported.