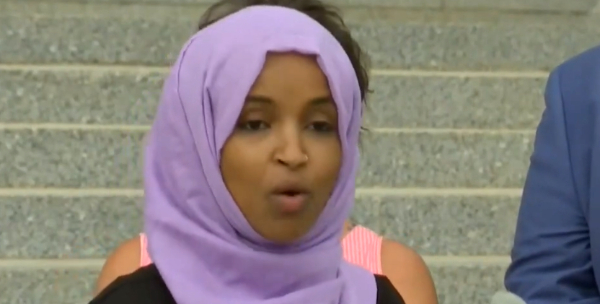 At an event Tuesday in Minnesota on "racism in policing," Rep. Ilhan Omar, D-Minn., went well beyond the topic, calling for the "dismantling" of the U.S. economy and political system.

"As long as our economy and political systems prioritize profit without considering who is profiting, who is being shut out, we will perpetuate this inequality," Omar said.

"We cannot stop at criminal justice system. We must begin the work of dismantling the whole system of oppression wherever we find it."

Omar was with members of the group Minnesota People of Color and Indigenous Caucus.

She's been a proponent of the move to defund police in response to the death of George Floyd in police custody in Minneapolis.

"You can't really reform a department that is rotten to the root," Omar said at the time. "What you can do is rebuild. And so this is our opportunity, you know, as a city to come together, have the conversation of what public safety looks like, who enforces the most dangerous crimes that take place in our community."

In March, she called for the government takeover of all hospitals for the duration of the coronavirus pandemic.

As one of four members of the radical freshman "squad" in the House, the Muslim immigrant has sparked controversy for anti-Semitic statements. In one tweet, she said, "Israel has hypnotized the world, may Allah awaken the people and help them see the evil doings of Israel."

In April 2019, she characterized the 9/11 attacks as "some people did something."