She described BLM as "a domestic terrorist organization."

"They don't care about black lives," she wrote. "They support the killing of more than 600K Black Babies every year!" 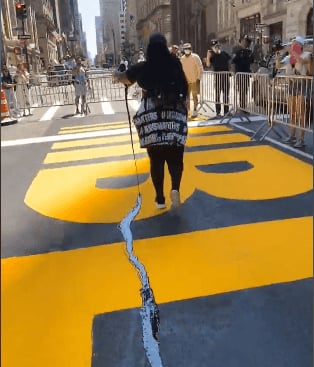 Beatty, 29, was arrested with Edmee Chavannes, 39. Both were charged with criminal mischief, given desk appearance tickets and released.

The two have developed a large following a social media since the death of George Floyd on Memorial Day, with their bold Christian-based counternarrative on race in America.

"The police expressed their HIGH APPRECIATION for what Bevelyn and Edmee stood up for today," the statement said. "They expressed their concerns and fears for their city. They are in fear for the sake of NYC and voiced that they need MORE people like them to help and stand up for what is RIGHT! They even asked for PRAYER!! "

We are going to take our country back! By any means necessary! #JesusMatters #RiseUp We Are: At The Well Ministries #USA #Trump2020 #NYC #NewYorkCity #ReFundThePolice #GodBlessBlue ( #BlackLivesMatter #BLM is a domestic terrorist organization. They don't care about black lives. They support the killing of more than 600K Black Babies every year! )

On Friday, three people were each charged with one count of criminal mischief and given a desk appearance ticket for covering the lettering with blue paint.

Beatty spoke to Eric Metaxas on Monday about her counterprotest Saturday, emphasizing that the BLM agenda is "killing" black people.

"They're talking about defunding the police, but most of my family live in these rough neighborhoods where the police are needed," she said, referring to Staten Island.