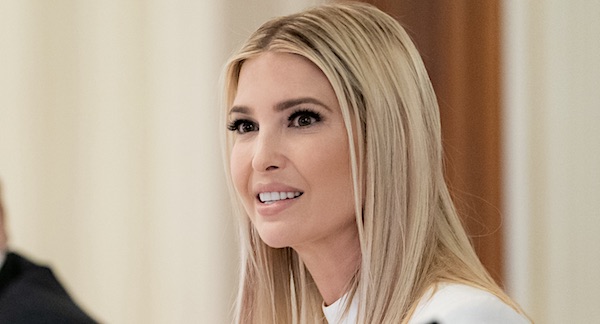 Adviser to the President Ivanka Trump delivers her remarks at the American Workforce policy advisory board meeting Friday, June 26, 2020, in the East Room of the White House. (Official White House photo by Tia Dufour)

The education of a Trump is elite and always expensive and explicitly directed toward the goal of a university degree.

It begins with a preparatory institution, usually a boarding school with a storied heritage stretching back two centuries and with annual tuition in the five figures. This preparation culminates in an acceptance letter from either the Wharton Business School at the University of Pennsylvania or Georgetown University in Washington, D.C.

But is the pomp and splendor and expense of this kind of college always worth it? Ivanka Trump, UPenn class of 2004 and senior adviser to the president, has her doubts. In fact, as she has long argued, an overemphasis on expensive four-year degrees that often require loans can be crippling.

Hence a new public-private White House initiative complete with an ad campaign backed by Apple, IBM, and the Business Roundtable. The message, which will soon be broadcast across the country by the Ad Council and on donated air space, is simple: “Find something new.”

The goal is straightforward: Connect Americans, many of them out of a job because of the pandemic and in need of a solution now rather than later, with education and training programs that can be accessed immediately, often online, and don’t require the time or money of a bachelor’s degree.

“There has never been a more critical time for Americans of all ages and backgrounds to be aware of the multiple pathways to career success and gain the vocational training and skills they need to fill jobs in a changing economy,” Ivanka Trump said in a statement.

“While we celebrate and encourage American innovation, we recognize the responsibility of both the public and private sectors to invest in American workers and ensure that they are reconnected with good jobs and prepared for the future,” she wrote.

The campaign features a video of workers who started careers without crushing university debt. It also has plenty of splashy graphics.

A man in a hardhat climbs the outside of a building, surrounded by a basket guard. The caption reads, “The new corporate ladder.” In another photo, a worker stands in a field of solar panels. The superimposed message: “The new corner office.”

It is meant to be inspiring and optimistic – an antidote to the "American carnage” that the president mentioned in his inaugural address to describe the gutted factories and rotting Rust Belt manufacturers he had seen on the campaign. He promised to make America great again with trade deals and by reversing the policies enacted by politicians who, as he said earlier on the trail, had continued “to allow China to rape our country.” Trump’s team says she was paying close attention.

“She really saw a lot of Americans across the country, where industries had left their communities, and the federal response was, ‘Well, the role of government is to say here's a Pell Grant and you should go back to a four-year university,’” a senior administration official familiar with Ivanka Trump’s thinking told RealClearPolitics. “As if that was our only responsibility.”

The White House stresses that the United States continues to have “the best universities in the world.” The same administration stresses, however, that while it wants “to continue to push people to get a bachelor's degree and beyond, it is not the only way to get a good job.”

Administration officials say they are open-eyed about the fact they are challenging conventional wisdom, but they argue the university track has failed too many students. But they point out that the traditional college-to-career pipeline leaks and leaves students in the lurch.

“There has been a myth for too long that everybody in my school goes to college, gets a degree, gets the job, and retires,” a senior administration official told RCP. “But we know that that's not really how it actually works. Yet we continue to have federal policies that promote that way of thinking.”

Oren Cass applauds the policy innovation. The executive director of American Compass and author of “The Once and Future Worker,” Cass told RCP that “the original sin of our system is the ‘college for all’ mentality and particularly the idea that ‘college’ is something you do by hanging out on a campus between the ages of 18 and 22.”

That mentality is a recipe for crushing student debt, he argued, and situation where “fewer than one-in-five Americans go smoothly from high school to college to career.” Rather than four years of loans, Cass insists that for most people, “an employer is a better potential source of both formal training and on-the-job experience than just enrolling yourself in college could be.”

The desirability of a university degree is so ingrained, a senior White House adviser said, that when it comes down to parents and children making an actual decision, some end up saying that skills training or an apprenticeship is “not for my kid.”

The White House plans to disrupt that mindset. Trump signed an executive order to prioritize job skills over a degree in federal hiring. Ivanka Trump has made technical colleges a frequent stop on her circuit, and now the eldest daughter of the president has recruited at least a handful of Silicon Valley titans to advocate for educational disruption. Most notably, the CEO of Apple.

“Now more than ever, we need to ensure that everyone has the tools they need to succeed and seize new opportunities,” Tim Cook said. “To invest in our future, we have to invest in people, in education, and the many paths to a well-paying job or starting a new business. This initiative is about empowering people across the nation to discover a more hopeful future for themselves and their families.”

Ivanka Trump and the first family is very much on board.