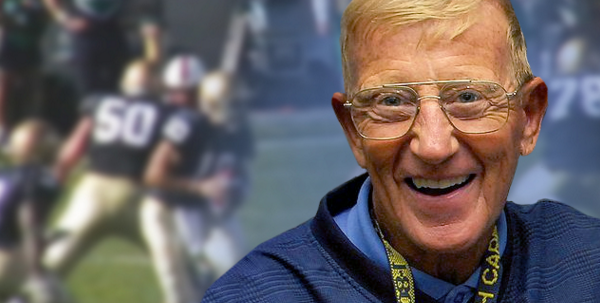 Holtz spoke Thursday evening on Fox News’ The Ingraham Angle about how the coronavirus pandemic will impact the return of college football and whether the “Fighting Irish” nickname should be left behind.

“Next thing you’re going to tell me, they’re going to topple my statue at Notre Dame,” he added. “That’s when I will really get mad.”

Holtz’s comments about the Ku Klux Klan, a racist and violent group that originated in the South after the Civil War and gained notoriety for targeting blacks, Catholics, and Jews, probably reference a May 1924 incident that took place in South Bend, Indiana.

The Klu Klux Klan “wanted to showcase its power and cement its sudden grip on Indiana politics by holding a picnic and parade in South Bend, the most Catholic area in the state,” according to University of Notre Dame Stories.

About 500 Notre Dame students responded by ripping the robes and hoods off of the Klan members, roughing members up, chasing members down streets, and stealing the hoods and robes as “battle trophies,” according to Notre Dame Stories.

Both the university and “Notre Dame Vs. the Klan: How the Fighting Irish Defeated the Ku Klux Klan,” a book written on the matter by Todd Tucker, describe the encounter at length.

“This quick turnabout in some ways encapsulates the riotous confrontation between the Klan and Notre Dame students in 1924,” the university’s story notes. “It represents the students’ free-spirited success in facing down hatred, but then gave way to the real dangers of a violent anti-immigrant fervor that swept through Indiana and much of the nation and focused its hate on both Catholics and the Irish.”

The university notes that it is not exactly clear how Notre Dame came to be known by the “Fighting Irish” nickname. The nickname may have originated from a 1919 visit from Irish freedom fighter and future president of Ireland Éamon de Valera, according to the university. It may also reference the fact that four of the six religious who founded Notre Dame in 1842 were Irish.

Additionally, Irish immigrants who fought for the Union in the “Irish Brigade” during the Civil War were called the “Fighting Irish,” which Notre Dame suggests was the first usage of the nickname. Rev. William Corby served as chaplain for the brigade and would go on to become the third president of the University of Notre Dame.

The university suggests that the first time the nickname was used for Notre Dame sports teams was in 1909 when one Notre Dame player reportedly yelled at his teammates, “What’s the matter with you guys? You’re all Irish and you’re not fighting worth a lick.” Notre Dame notes that news reports at the time attribute Notre Dame’s comeback in this game to the spirit of the Fighting Irish.

Notre Dame did not immediately respond to a request for comment from the Daily Caller News Foundation.