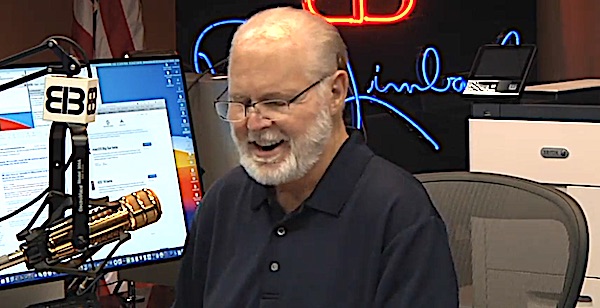 PALM BEACH, Florida -- After spending last week undergoing his latest round of treatment for advanced lung cancer, radio powerhouse Rush Limbaugh returned to the airwaves Monday, and used a baseball analogy to update listeners on his progress.

"One was a targeted therapy of clinical trial drugs, which worked but nearly killed me in the process. And so we had to get off of those."

"But on my third at-bat, the third attempt, I managed to get on base. I hit a solid single and then stole second. I am currently on second base hoping to slide into third and eventually make it all the way home. We're in the bottom of the ninth. If I get all the way home we get extra innings. And that's what we're shooting for here."

"I'm very confident this is going to go into extra innings," he added. "I'm feeling extremely good right now," but also noted he was "very guarded" because "anything can change rapidly."

"There are good days, good weeks. There are bad days and bad weeks," Limbaugh continued. "This past period, this past treatment, which was a week ago tomorrow, this has been much better than I thought. I was expecting, because of the cumulative effect of the toxicity, I was expecting to be, you know, in that just debilitating fatigue for 10 days. And I wasn't. It lasted two days, Thursday and Friday. The weekend was good. But, again, anything can change rapidly and on a dime."

"The bottom line is I'm entirely capable of being here today. My energy level is great. I'm doing extremely well. And I don't think anybody would mind if I told you honestly that I am doing better at this stage than I thought I was gonna be doing."

Limbaugh was again thankful for the support he has received from his wife, Kathryn, and prayers from those in his audience.

"It's a blessing," Limbaugh said. "I believe prayer works. I know it does."

Joe Kovacs
Joe Kovacs is an award-winning journalist of more than 30 years in TV, radio and the internet. He is the author of the forthcoming book, "Reaching God Speed: Unlocking the Secret Broadcast Revealing the Mystery of Everything." His previous books include "Shocked by the Bible 2: Connecting the Dots in Scripture to Reveal the Truth They Don't Want You to Know," a follow-up to his No.1 best-seller "Shocked by the Bible: The Most Astonishing Facts You've Never Been Told" as well as "The Divine Secret: The Awesome and Untold Truth about Your Phenomenal Destiny."
@JoeKovacsNews
Legendary comedian Jackie Mason dead
GOP fireworks! Trump election lawyer Jenna Ellis quits Republican Party
Trump identifies angriest American during electrifying speech at CPAC
Republican fireworks in Texas on July 4! Allen West announces run for governor
68 dogs rescued after being crammed into cages on truck, intercepted on way to dog-meat festival
See more...