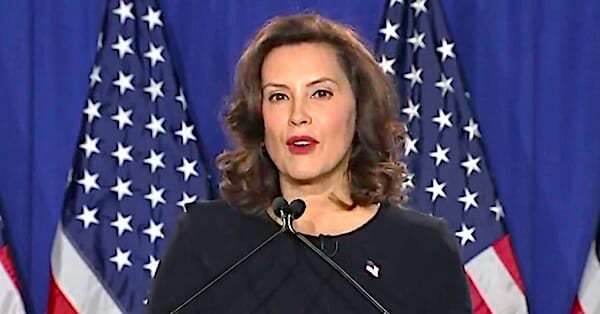 The governor's spokesman has argued that anything protected by the state or federal constitutions is allowed.

So why are weddings banned?

A lawsuit against Whitmer's orders says its because the state contends a wedding "even if a minister is involved, is not a religious worship service."

The civil-rights action, filed in U.S. District Court for the Western District of Michigan, is challenging the governor's orders limiting "social gatherings" but allowing the protests and street riots of the Black Lives Matter movement.

The lawsuit was filed by the American Freedom Law Center on behalf of Baker Events LLC; Jay Carl, its manager; and David Vansolkema and Kiley Stuller, who are planning a wedding.

The events center received a "cease and desist order" from Ottawa County stating that weddings are not allowed even though the center installed air purifiers, sanitation stations and other safety measures.

AFLC Senior Counsel Robert Muise said: "This tyranny has gone so far now that the governor does not consider a wedding ceremony to be religious worship. This is not only demonstrably false, it is an exceedingly dangerous attack on religious freedom. This has to stop. As Benjamin Franklin reminded us, 'Those who would give up essential liberty, to purchase a little temporary safety, deserve neither liberty nor safety.'"

Has Michigan Gov. Gretchen Whitmer acted in the public interest during the pandemic?
3% (22 Votes)
97% (809 Votes)

The governor's orders exempt places of religious worship, stating "nothing in this order shall be taken to abridge protections guaranteed by the state or federal constitution under these emergency circumstances."

The lawsuit alleges: "Three days after she issued EO 2020-110, Defendant Whitmer promoted and even participated in an outdoor social gathering that far exceeded 100 persons. When questioned about her decision to march ‘shoulder to shoulder’ with ‘hundreds of’ protesters—conduct prohibited under EO 2020-110 even for outdoor gatherings—Defendant Whitmer’s spokesperson explained that this social gathering did not violate the executive order because '[n]othing in th[e] order . . . abridge[s] protections guaranteed by the state or federal constitution.'"

The governor also is accused of allowing a variety of other groups of 100 persons or more to meet.

"Consequently, Defendant Whitmer is willing to allow spontaneous, uncontrolled, and large social gatherings promoting one type of message, while prohibiting plaintiffs’ organized weddings, even though the weddings, unlike the permitted protests, would be carried out with significant health and safety measures," the complaint states.

Senior Counsel David Yerushalmi said: "Only in a world turned upside down and inside out do governors and mayors embrace the nihilist violence of the weaponized term ‘Black Lives Matter’ while threatening responsible religious worship with criminal sanction. AFLC will not bow to this vile idolatry."

The lawsuit targets restrictions on weddings that appear to violate the First and Fourteenth Amendments.

It explains that the U.S. Supreme Court already has ruled: "Business practices that are compelled or limited by the tenets of a religious doctrine fall comfortably within [the definition of 'exercise of religion']. Thus, a law that 'operates so as to make the practice of … religious beliefs more expensive' in the context of business activities imposes a burden on the exercise of religion."

The suit seeks a declaration that the plaintiffs' constitutional rights have been violated and a halt on enforcement of the ban.