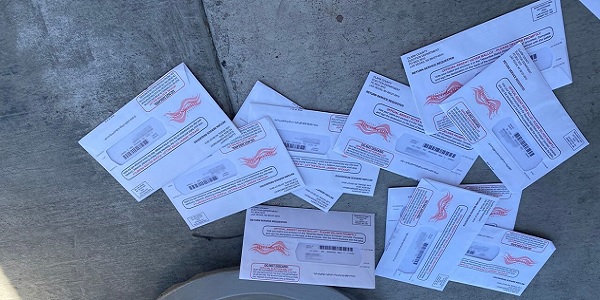 Even as New Jersey voters look to the general election, many are still coping with the aftermath of the state’s first all-mail vote. Paterson, the Garden State’s third-largest city, is mired in a burgeoning election scandal. One in five ballots have been rejected. The local NAACP has cried foul. And now, four men — including a councilman and councilman-elect — have been charged by the state’s attorney general with criminal election fraud.

The state’s May 12 election was conducted entirely by mail on Gov. Phil Murphy’s order. Ballots were automatically sent to every registration. That makes Paterson an early test of the vote-by-mail model now being pushed in unison by the political left. The fact that it immediately went off the rails is a warning to the nation that we would be foolish to ignore.

Concerns began mounting before voting had even ended. Undeliverable ballots piled up in trash cans and apartment lobbies. Even though state law forbids anyone from collecting more than three ballots, roughly 800 ballots were found bundled together — 400 were stuffed into one mailbox, and 360 more were found in another in a completely different town. That evidence of illegal vote harvesting led officials to reject them all.

Another 1,214 votes were disqualified because the voters’ signatures did not match official records, and 1,000 more because the “bearer” — the person who collected and delivered the vote — didn’t properly report doing so. Voters reported never receiving ballots even though they are listed as having voted — in other words, someone else purportedly cast their vote.

Ultimately, nearly 20% of ballots cast on May 12 were invalidated. Paterson NAACP leader Rev. Kenneth Clayton summed it up best: “These kinds of acts make people not want to vote anymore.”

Unsurprisingly, the four people recently indicted face charges that they illegally possessed or tampered with ballots. Fresh accusations are coming to light that one of the defendant’s campaigns hired workers to churn out fraudulent votes in bulk.

The simple fact is, mail voting is more susceptible to error and fraud than voting in person. Bad actors can get their hands on mail ballots and alter, forge, or destroy them. Anytime voting takes place away from the controlled and observed confines of a polling place, it is less secure. Fifteen years ago a commission co-chaired by President Jimmy Carter warned that mail-in voting is likely to increase the risks of fraud and of contested elections.”

That’s as true today as it was then.

Jury-rigging a vote-by-mail system doesn’t just risk fraud. The New Jersey Spotlight reported that one in 10 ballots cast statewide were rejected for various reasons. Many arrived too late to be counted, a stark reminder that mail ballots can be lost or delayed. Roughly a third of rejected ballots had something wrong with the ballot itself: the ballot was not enclosed, for instance, or was missing information necessary to be processed.

These sorts of mistakes — to say nothing of innocent errors like voting for too many candidates in a single race — are easily fixed at polling places. Not so when those votes are mailed in. Studies show that first-time absentee voters are more likely to make mistakes that force officials to disqualify their ballots. Let’s not forget, an unprecedented portion of the electorate this fall will be first-time mail voters. Imagine the nightmare of a November election decided by a hair, but with a sizable percentage of ballots thrown out.

Vote-by-mail proponents retort that the obvious solution to the problem of rejected ballots is to discard the rules and safeguards that lead to ballots being invalidated. Liberal groups and their allies have filed dozens of partisan lawsuits across the nation to force this plan on states. Its core pillars: Automatically mail ballots even to voters who are likely deceased or have moved away, allow vote harvesting, and dismantle the systems that states use to stop vote tampering and ensure each vote is cast by a lawful voter.

In other words, the aim of the vote-by-mail crowd is to create all the conditions that made the Paterson election ripe for fraud, but remove the tools that allowed that fraud to be detected, stopped, and prosecuted. Do they really believe no one will take advantage of that free-for-all?

Most voters understand that in fair elections it must be both easy to vote, and hard to cheat. Fraud, both real and perceived, turns people off.

States are down to the wire to finalize their plans for voting this fall. Vulnerable voters need to be able to request absentee votes, but that is a far cry from the all-mail election that activists are pining for. Their plan is a recipe for disaster. If we implement it, we may soon be asking ourselves how we could have ignored Paterson’s warning.

Jason Snead is executive director of the Honest Elections Project.

The most mean-spirited president in history