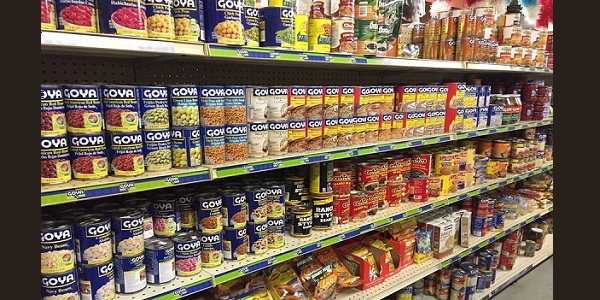 The radio host who launched a "buycott" of the products of the Goya Food company to counter a boycott in response the CEO's praise of President Trump says "love is winning."

On Friday, he wrote on Twitter, "My brother came up with a terrific idea and I am encouraging all to join me in purchasing $10 worth of Goya Foods products and donating them to your local food bank.

"Let's push a BUY-cott, not a boycott," he wrote. "Let's show the #Goyaway people what compassion can do."

On Tuesday, he said, "It looks like love is winning and that's really what this is about, taking a negative and turning it into a positive that works for the employees of Goya and the people who need food right now."

The Miami Herald reported 27-year-old Casey Harper of Virginia already has raised more than $190,000 through online donations to buy Goya Food products and donate them to local food pantries.

My brother came up with a terrific idea and I am encouraging all to join me in purchasing $10 worth of @GoyaFoods products and donating them to your local food bank. Let's push a BUY-cott, not a boycott. Let's show the #Goyaway people what compassion can do. https://t.co/SoHXRXHADG

Harper, a producer for conservative political pundit Eric Bolling, blew past the original $10,000 goal in hours.

"We expect to begin purchasing as soon as possible, and will have video and pictures of the process so everyone can see the results!" he said. "Our purchase will focus on rice, beans and canned goods. Also, because of the added volume, donations beyond the $150K mark will go to pantries beyond the Washington, D.C., area."

Some stores have posted signs limiting customers' purchases of the food company's products because of the high demand.

Goya, founded in 1936, describes itself as the largest Hispanic-owned food company in the country. It encountered the anti-Trump resistance after CEO Robert Unanue praised the president during a White House event.

He called Trump an "incredible builder."

When the left criticized him, he declined to apologize, drawing further flak from the likes of Democratic Rep. Alexandria Ocasio-Cortez.

Unanue has described the backlash over his comments as "oppression of speech."

He pointed out he was contacted years ago by Michelle Obama, who wanted help encouraging people to eat better.

He eventually participated in a White House event.

But now he's under fire for appearing at the White House and praising the current president.

"And so you're allowed to talk good or to praise one president, but … when I was called to be part of this commission to aid in economic educational prosperity and you make a positive comment, all of a sudden that's not acceptable," he said.

In a commentary at NJ.com, Roland A. Alum and Luis A. Alum said that while there are "misguided self-haters" in any community, those who are pursuing "divisive hatemongering" do not represent the community at large.

"We cannot lose sight either that Goya, a proud ethnic minority, family-run enterprise, has provided employment to thousands of workers of all backgrounds throughout the country since its founding by visionary Spaniard immigrants who were, evidently, fleeing Spain’s fratricidal civil war 84 years ago," the commentary. "In fact, Goya is a firm with a solid record of corporate responsibility that, moreover, regularly mentors not only small business entrepreneurs, but also high school and college students of all ethnic backgrounds, especially in this great Garden State of ours."

Goya Foods CEO won't apologize in face of boycott, backlash for pro-Trump remarks: 'Suppression of speech' // Bob Unanue sets a good example in the fight against liberal terrorism. Don’t let his voice be suppressed. Stand up against these thugs. #BuyGoya https://t.co/5TmFnsPmcP