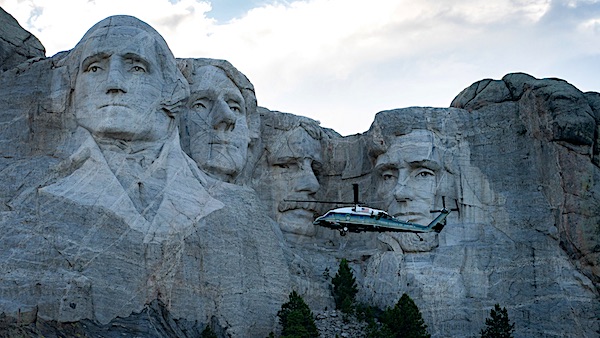 It was a late Friday evening and then-candidate Barack Obama was fatigued following a full day of campaigning. It was May 30, 2008, and Obama was in South Dakota visiting Mount Rushmore, a monument dedicated to four presidential giants of America’s past.

The New York Times, in its report that weekend, described the massive sculpture as a “granite visage” and the “Pride of South Dakota.” Obama even joked with reporters that his ears were too large to be added to the massive wall face.

A dozen years later, President Donald Trump made a Friday night visit of his own to the impressive monument, on the eve of America’s 244th birthday—the Fourth of July. The president delivered an inspirational, inclusive message rooted in the American ideals of life, liberty, and self-determination. He spoke of our shared belief in equal opportunity, equal justice, and equal treatment for citizens of every race, background, religion, and creed.

The New York Times’ report on this president’s visit to Mount Rushmore was strikingly different than its report on Obama’s visit 12 years earlier. Following the president’s address, his usual detractors, including the Times, attacked his message as “divisive.”

So, what led to such a mischaracterization? The answer, I’m afraid, isn’t very nuanced. The Democrat establishment and its media allies have chosen to elevate the radical left’s hatred of America in order to achieve its short-term goal of defeating Donald Trump in November.

The president’s message could only be interpreted as divisive by individuals who do not love America, and who do not believe in the idea that the great American experiment continues to march toward a more perfect union despite inequities of the past. The president highlighted the famous words enshrined in the Declaration of Independence that declared “all men are a created equal,” words he described as setting into motion the “unstoppable march of freedom.”

The Democrat Party and its media allies don’t’ see it that way. They see an America that is dark, evil, and irredeemable. The radical left, now being fully supported by the Democrat establishment and many in the mainstream media, are stoking tensions, fear, and destruction by mobs.  They celebrate what Lance Morrow, writing in the Wall Street Journal, calls “ideology as performance” and “outage with a touch of holiday.”

This is not a holiday for the majority of Americans who love this country. It’s why this election is so important. Joe Biden has fully embraced the radical left—seeing it as another path towards taking down President Trump and the Republican Party in November.

Listen, Biden has been a dull ornament in politics for generations, as naïve in his understanding of the devastating consequences of his 1994 crime bill to the black community as he is of the consequences of the street violence he is now helping fuel from the comfort of his basement.

The Democrat Party has its partisan reasons for taking on Trump, but this is much more complex than just a partisan battle of ideas. This election is a confrontation between those who believe in America and the ideals it stands for, and those who wish to tear down America in exchange for an imaginary socialist future where there is global control of American life.

The New York Times’ description of the president’s message as a “harsh diatribe” meant to “sow division during a national crisis,” ignores the fact that Joe Biden has spent the last six months engaged in divisive rhetoric and political cheap shots, rather than a unifying message for the American people.

None of this is about racial justice, as Biden wants Americans to believe. Nor is it about the social revolution that Biden claims to support. It’s about sowing enough division, hate and fear to convince enough voters to turn back to the old ways of Washington—where empty vessels like Biden feed empty promises and rhetoric to the masses while personally enriching themselves and their families behind the scenes.

Americans can both believe in America and the ideals for which it stands—as a majority of Americans do—while also acknowledging, and working to fix, systemic injustices faced by the black community.

We cannot allow the unwinding of hundreds of years of progress. The radical left, with the full support of the Democrat establishment, wants to decimate this great American experiment in favor of mob rule and a socialist future. If Joe Biden is elected, that’s exactly what will happen.

Katrina Pierson is a senior adviser to Donald J. Trump for President Inc.