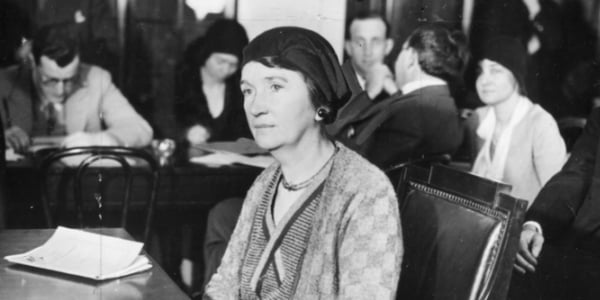 As the founder of Planned Parenthood, Margaret Sanger long as been revered in America's abortion industry.

Now Fox News reports Planned Parenthood of Greater New York has announced it will remove Sanger's name from its New York City clinic due to her "harmful connection to the eugenics movement."

The Washington Times previously reported that hundreds of donors to the abortion business along with hundreds more current or former staff members publicly decried Sanger as "a racist, white woman."

Pro-life activists have pointed out Sanger's racism for decades, but it took the emphasis on race amid the Black Lives Matter movement protests for Planned Parenthood to take action.

Karen Seltzer, the head of the New York affiliate, said the "removal of Margaret Sanger’s name from our building is both a necessary and overdue step to reckon with our legacy and acknowledge Planned Parenthood's contributions to historical reproductive harm within communities of color."

The affiliate also is asking city leaders to take Sanger's name off signposts for local streets.

The pro-life group Operation Rescue pointed out the New York business, at 26 Bleecker Street, is known for causing "a large number of life-threatening medical emergencies that required ambulance transport to a local hospital."

"Sanger is well known for her eugenics ideology that included a reprehensible desire to purify the human race by reducing the population of certain minority races, including blacks," wrote OR senior vice president Cherly Sullenger

Troy Newman, president of Operation Rescue, said removing Sanger's name "from one of their abortion mills is a hollow gesture that doesn’t begin to make up for over 100 years of racism and harm."

"The fact Planned Parenthood embraces the Marxist, Anti-American Black Lives Matter movement, then proceeds to kill black babies and butcher black women is the height of hypocrisy," said Newman. "If Planned Parenthood truly wanted to help women, it would stop aborting all babies, including the babies of blacks and other minorities, which it continues to disproportionately target for depopulation through abortion."

Sanger launched the Negro Project in 1939 with the goal of "helping Negroes to control their birthrate."

She also proposed the idea of a federal "population bureau" to police reproduction.

Among her more infamous audiences was a Ku Klux Klan meeting in 1926, and she proposed sterilizing people. She also wanted to put "illiterates, paupers, unemployables, criminals, prostitutes and dope fiends" on farms.

Abby Johnson, who managed a Planned Parenthood clinic in Texas for several years before turning to the pro-life movement for help, said: "In a rare moment of introspection, and quite shockingly honest, Planned Parenthood of NY has made the right decision to remove their founder's name from their building. Margaret Sanger is a known eugenicist whose legacy is built on racism. Even though Planned Parenthood is moving to separate themselves from Sanger's name, her influence on the abortion giant remains at its core, including their annual Maggie Awards named after her.

"Horrifyingly, New York aborts more black babies than are born alive, an almost incomprehensible statistic and one that Planned Parenthood plays an integral role in. Margaret Sanger would have been happy with her legacy at Planned Parenthood. Removing her name from their building is a good start but there is a lot more work to be done to extract her influence from the organization."