Just three weeks ago, Seattle Democratic Mayor Jenny Durkan downplayed the seizure of a police station and several blocks of her city by radicals demanding the abolishment of the Seattle Police Department and the city's court system, suggesting it might turn into a "summer of love."

But this week, some of those radicals showed up at her house, and after murders, robberies, assaults and other violent crimes within the "autonomous zone" known as CHOP, the mayor has issued a 48-hour executive order Wednesday to vacate the area. 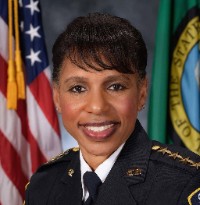 The order declares gathering in and around the abandoned Seattle Police Departments East Precinct and nearby Cal Anderson Park as "unlawful assembly," reported local KIRO TV.

Seattle Police Chief Carmen Best said in a statement the CHOP "has become lawless and brutal" since her department abandoned the precinct to Antifa, anarchist and Black Lives Matter protesters June 8.

Best said the order and the police response came after four shootings, resulting in multiple injuries and the deaths of two teenagers allong with "robberies, assaults, violence and countless property crimes have occurred in this several block area."

"As I have said, and I will say again, I support peaceful demonstrations. Black Lives Matter, and I too want to help propel this movement toward meaningful change in our community," the police chief said.

"But enough is enough."

Dozens of officers, some wearing riot gear, arrived at about 5 a.m. Wednesday morning and ordered the area cleared within five minutes.

"Anyone who remains in the area, or returns to the area, is subject to arrest," police said.

On Sunday afternoon, self-declared socialist Seattle City Councilmember Kshama Sawant marched with a large group of protesters to Durkan's mansion, calling on the mayor to resign.

One of the demonstrators said, "We came down to Jenny Durkan's mansion to bring the demands of the movement and of the families who have been impacted by police violence to her doorstep as she seems to not be able to hear our demands any other way."

Durkan has asked the City Council to investigate Sawant's "contemptuous behavior" and consider expelling her.

Sawant has gained national attention for her push for a $15 minimum wage.

Time to wake up

KIRO, citing investigators, reported Wednesday that 23 people have been arrested so far, including a 29-year-old man who had a large pipe and a kitchen knife.

Officers, with SWAT vehicles nearby, formed lines to keep people from returning.

Best said Wednesday that after the area is cleaned up, police will resume operations there soon as they can.

KIRO reporter Deedee Sun said tension is high. Sleeping protesters, she said, were heard shouting expletives after they were awoken by police. Some were pushing over portable toilets, police said.

Counter-protesters said they welcome the return of order.

In her statement, Best said that her job "and the job of our officers, is to protect and serve our community."

"This is not an end to our department’s engagement with demonstrators," she said. "We must continue our efforts to build trust and redefine our roles as guardians in our city."

She said she will "continue to work with the Community Police Commission, the Office of Police Accountability, the Inspector General, the Mayor, the Seattle City Council and ALL of our community and social justice partners in the coming weeks to encourage peace and to begin meaningful dialog about re-envisioning public safety in our community."

Two weeks ago, Durkan and city officials engaged in negotiations with the CHOP protesters, agreeing to remove temporary roadblocks and replace them with concrete barriers, in exchange for ceding three blocks of "occupied territory," Fox News reported.

In an interview June 15 with CNN's Chris Cuomo, Police Chief Best said CHOP has slowed police response times in the area, but "if we get a call, there's an important emergency, a 911 call, we’re going in."

Early June 15, a Seattle auto repair shop just outside the CHOP's initial perimeter was broken into by a protester who attempted to light a fire. The owner detained the protester. But despite more than a dozen 911 calls, the owner said, no police or fire personnel arrived at the scene. Armed protesters broke down the fence, demanding the suspect be released.

Meanwhile, the Seattle City Council voted unanimously that day to ban police from using chokeholds and crowd-control devices such as tear gas and pepper spray.

President Trump warned at the time that if Durkan didn't regain control of the Seattle neighborhood, he would.

A defiant Durkan wrote on Twitter: "Seattle won't lose sight of what we need: allowing our community to exercise their first amendment rights, demilitarizing our police force, rethinking who responds to 9-1-1 calls, and investing more to create meaningful change for our black and brown communities."

The mayor said Trump "will do anything to avoid listening to the voices of millions of Americans asking for change."

"He instead distracts with lies and language purposefully intended to incite violence. He thrives on division when we desperately need to move forward as a nation," she said.

The previous week, Durkan reacted to Trump's labeling of the CHOP protesters as "domestic terrorists."

In another tweet she said it was clear Trump "doesn’t understand what’s happening on five square blocks of our City."

Durkan said in an interview at the time with CNN's Chris Cuomo on “Cuomo Primetime" that the zone is "more like a block party atmosphere."