It's a court that does not swear in witnesses, considers hearsay without authenticating evidence and allows witnesses to holler their opinions from the audience.

There are no transcribed proceeding notes, and some files apparently have been destroyed.

Nevertheless, the court has assumed the authority to take homes from people who now are homeless, prompting a federal lawsuit.

"It is not an exaggeration to say that the Shelby County Environmental Court ruined Sarah Hohenberg’s life," said the Institute for Justice, which is representing Hohenberg as well as Joseph Hanson.

Regarding Hohenberg, IJ said: "In 2009, a tree fell on her home causing significant damage. While she tried to get her insurance to pay for repairs to her home, Ms. Hohenberg’s neighbors sued her in the Environmental Court. The court’s multi-year proceedings left her without a home, without her possessions, bankrupt, and a fugitive from the law."

The new case against the Democrat-run city and its court processes is in U.S. District Court for the Western District of Tennessee. 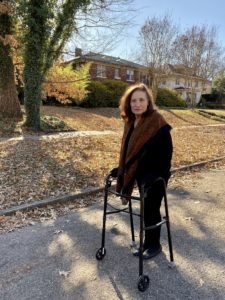 "The Shelby County Environmental Court proceedings involving occupied homes do not come close to meeting the standard required by the U.S. Constitution,” said IJ Senior Attorney Bill Maurer. “A courtroom that does not verify evidence, hear testimony under oath, transcribe its proceedings or keep records is no court at all.”

In Shelby County, it's the Environmental Court that reigns in such disputes.

IJ said that during the proceedings against Hohenberg, the Environmental Court ordered her to sign a quit-claim deed so the house could be auctioned off to the highest bidder.

"She refused to sign the deed. The Environmental Court issued an order of contempt and arrest. Fearing that jail would kill her in her fragile physical state, she fled to stay at a hotel in Mississippi. The Environmental Court then ordered her personal possessions to be removed from the house. Since she was too ill to move her possessions herself, and too poor to hire someone to do it for her, the city of Memphis placed her possessions in the street, where her furniture, personal possessions, financial records and papers were either carried away or lost."

Hohenberg, through her lawyers, said: "My home, everything I had, is now gone. And there’s no record of why it was taken away."

The shortcomings in what most would consider reasonable judicial standards are enormous, the case reveals.

"Private plaintiffs or Memphis code enforcers present unsworn, unauthenticated information about defendants’ homes. Neighbors testify against a defendant by being called upon in the audience and asked to stand and speak. Anyone wishing to review what happened in a case against them is typically out of luck—many case files are lost, destroyed or may not have been created in the first instance. While defendants are technically able to appeal Environmental Court decisions, there is no record, evidence or transcripts for an appellate court to examine. Put another way, defendants have the right to appeal in name only."

"By the time the Environmental Court was finished with her, she was bankrupt, homeless, stripped of her possessions and a fugitive from the law. This complete lack of due process is unconstitutional and a disgrace."

"Despite no testimonial or evidentiary basis, the Environmental Court jailed Mr. Hanson numerous times, bulldozed his home and destroyed his possessions. He, too, is now homeless," IJ said.

The case seeks a court declaration that the proceedings have been illegal, along with compensation for their losses.

It contends that city officials knew "the court lacked constitutionally sufficient due process" but they decided to "continue collaborating and funding ongoing code-enforcement operations designed to send property owners to ... litigation."

Hohenberg, the complaint explains, owned her property outright, and after a storm dropped a tree on the main house and made it uninhabitable, she lived in a two-room outbuilding while she sued her insurance company for repairs.

During that time, her neighbors, Frederick and Mercedita Neal, sued her for $30,000, and she was forced to spend $100,000 defending herself.

Eventually the court simply appointed an organization, Neighborhood Preservation Inc., as receiver for her property. The court ordered her to sign over title, and when she refused, ordered her arrest.

Her possessions were thrown onto the front yard and were lost. She fled to Mississippi to avoid incarceration, and she lives there now in a hotel room.

The Environmental Court then dismissed the charges, meaning she was not allowed to appeal.