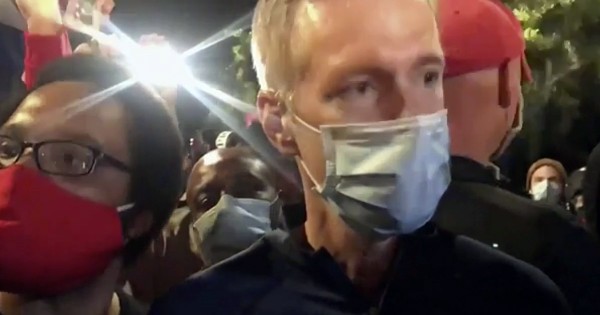 When Portland, Oregon, Mayor Ted Wheeler joined Black Lives Matter and Antifa protesters Wednesday night in front of the boarded-up and graffitied federal courthouse in his city, he might have expected a little love for his hands-off approach to some 55 days of violent demonstrations.

The Democrat, after all, has called on federal authorities to either remain in federal buildings or leave the city, describing the agents as a "personal army" for President Trump.

But on the streets Wednesday night, demonstrators cursed him and insisted he resign before he was tear-gassed by police, reported Oregon Public Broadcasting.

OPB said the mayor's appearance was prompted by a weekend editorial in the left-leaning Portland Tribune calling on him and other leaders to go listen to the demonstrators.

"Let the protesters yell at you," the paper said. "Let them swear. Let them chant."

Chants of "F-- Ted Wheeler" and "resign" were heard all night, and his remarks were drowned frequently by boos and insults.

Wheeler railed against the federal officers protecting the Mark O. Hatfield Courthouse and other federal property. But he explained to demonstrators he doesn't have the power to force them to leave.

The mayor told the protesters that, nevertheless, they had brought about major changes in the Portland Police Bureau.

Yet as he answered questions from protest leaders, munitions used by police against the crowds were dumped at his feet. A list of demands was projected on the wall above his head as he spoke, and as he concluded, the crowd called on him to resign.

More boos rained on him each time he told questioners he wouldn't hand over day-to-day oversight of the Portland Police Bureau to Portland City Commissioner Jo Ann Hardesty, as she has demanded. 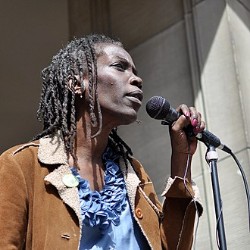 While at the fence separating the demonstration from the federal courthouse, tear gas and flashbang grenades scattered the crowd.

"How’s it feel, Teddy?" one demonstrator yelled at him.

Afterwards, OPB reported, Wheeler said: "It was not great. It makes your eyes really burn."

At the fence, activist and musician Mac Smiff told Wheeler he has not lived up to his promises.

Wheeler told Smiff he wouldn't leave: "If you get gassed, then I get gassed.”

Meanwhile, the Portland City Council passed a resolution directing the police bureau to have no contact with federal officers. At the same meeting, Commissioner Hardesty accused Wheeler of welcoming the federal officers.

About an hour after Wheeler departed, the Portland Police Bureau declared the event Wednesday a riot, ordering people to leave downtown or face "arrest, citation or riot control agents."

Hardesty, during a video conference earlier Wednesday sponsored by the Portland-based Western States Center, accused police of causing the strife on the city's streets by sending in provocateurs, reported The Oregonian newspaper.

"I want people to know that I do not believe there's any protesters in Portland that are setting fires, that are creating crisis. I absolutely believe it’s police action, and they’re sending saboteurs and provocateurs into peaceful crowds so they justify their inhumane treatment of people who are standing up for their rights," she said.

The paper said Hardesty offered no evidence to back up her allegations.

Officer Daryl Turner, president of the Portland police union, responded: "Really? Really? That is the most ridiculous thing I've ever heard."

Turner said it's "become completely clear that Commissioner Hardesty is part of the problem in Portland."

"Every one of the many videos we have seen confirms that small groups of rioters are starting the fires and trying to burn down buildings," he said. "Even a quick search of Twitter shows rioters setting the fires and boldly claiming responsibility."

The Oregonian said that two weeks earlier, Portland city officials recorded 144 fires set by people in the city since demonstrations began after the death of George Floyd in Minneapolis.