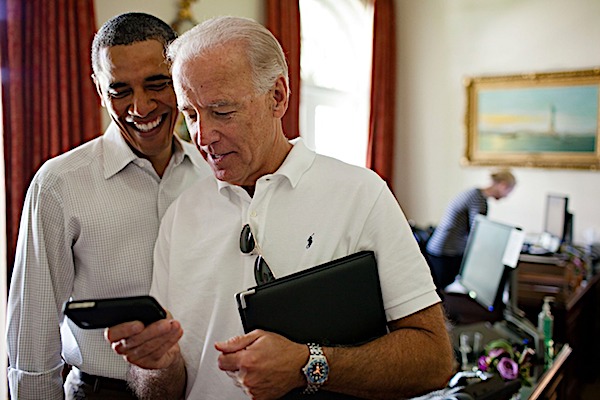 Former Vice President Joe Biden is billing himself as the person who can ease race relations and unify the nation as part of his 2020 presidential bid. But race relations plummeted while the presumptive Democratic nominee served under President Barack Obama, the first black U.S. president in history.

Biden supported demonstrations in May and June against the death of George Floyd, a black man who died after a white police officer knelt on his neck for nearly 9 minutes, video of the incident shows. He met with Floyd’s family after the tragedy and wrote in a June 10 tweet that he’s ready to get to work on “day one” to tackle racism.

The former vice president stayed on message that month and promised to “heal the racial wounds that have long plagued our country.”

“This is a battle for the soul of America,” Biden said at an economic roundtable in June. “Who are we? What do we want to be? How do we see ourselves? What do we think we should be? Character is on the ballot here.”

But last time Biden was in the White House, when he was serving as vice president, race relations in the U.S. took a nose dive.

Race Relations During The Obama Era

Americans held a positive view on race relations during the first half of Obama’s administration, with more than 52% of voters telling pollsters in 2008 that the former president’s victory would lead to better race relations, a Pew Research poll published in November 2008 showed. Only 9% thought race relations would get worse.

But polling on racial relations turned overwhelmingly negative during the last half of Obama’s administration. Nearly 70% of Americans said in July 2016 that race relations were bad, a level not seen since the 1992 riots in Los Angeles during the Rodney King case, a New York Times/CBS News poll published that month and year show.

The poll found that six in 10 American voters said race relations were growing worse, up from 2015, when 38% 0f people expressed a similar view.

The downward trajectory coincided with the blossoming of the Black Lives Matter movement, which began in 2013 after videos were made public showing the deaths of Alton Sterling and Philando Castile at the hands of the police. They were killed over the course of two days that year.

Five police officers were shot and killed in Dallas by a black Army veteran the day after the Sterling and Castile deaths.

Obama told audience members at the police officers’ memorial service on July 11, 2016 that, “we are not as divided as we seem,”

“We cannot simply turn away and dismiss those in peaceful protest as troublemakers or paranoid,” Obama said.

He added: “We can’t simply dismiss it as a symptom of political correctness or reverse racism. To have your experience denied like that, dismissed by those in authority, dismissed perhaps even by your white friends and co-workers and fellow church members again and again and again — it hurts.”

Obama’s pleas didn’t do much to change perceptions.

A Gallup survey conducted in January 2020, for instance, recorded a double-digit increase (14 percentage points) in public satisfaction with the state of race relations in the country. Only 22% of people held a satisfactory view on race at the end of the Obama-era, with that number jumping to 36% in January, Gallop’s survey showed.

Satisfaction also increased between six and nine points regarding the position of black people and other racial minorities in January, according to the Gallup poll. Trump and White House officials cited the historic low black unemployment rate for reasons why attitudes on race were in positive territory at that time.

Black unemployment reached a record low during the first two years of the Trump administration, with only 5.9% claiming unemployment in May 2018. Yet the biggest drop came under Obama, when the unemployment rate for black people fell from 16.8% in March 2010 to just 7.8% in January 2017, AP reported in 2019.

Poll numbers on race relations plummeted shortly after Floyd’s death, which sparked nationwide demonstrations and calls for city and state officials to defund the police. Biden does not endorse an outright campaign to defund the police but does support a move to redirect police funding to address mental health.