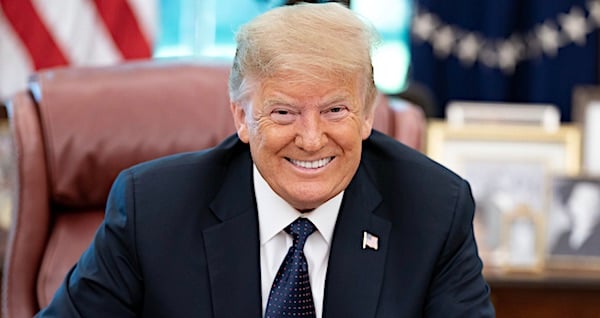 It’s time for all Republican lawmakers to unite behind President Trump unequivocally, especially as it is clearer than ever that the radical left poses an existential threat to our society that can only be defeated by a unified political movement this November.

While most establishment politicians get nervous around big elections, Donald Trump is not the type of leader who will compromise on his principles because of opinion polls and focus groups. For the past 3 ½ years, this president has done everything he can to empower American workers — and that is exactly what he will continue doing for four more years.

The upcoming election is even more important than the historic 2016 campaign — this is a moment in history when we must all unite behind our courageous president or face the catastrophic consequences of a Washington controlled by radical socialists running a new “cultural revolution.”

The left is calling to “unify” as well. However, having seen the slow evolution of the left’s planning and implementation of its ideology in the K-12 system, higher education, and even seminary training, its unity call is ephemeral and elusive. It is close to nihilism, but it is not. It has content. The left’s ideology is consistently aimed at destroying the Judeo-Christian West. No religion, philosophy, or system of ethics is supported by the left. It does not even call on the authority of Martin Luther King Jr., who unified conservatives and liberals based on our shared theological truth.

“Let us not wallow in the valley of despair, I say to you today, my friends. And so even though we face the difficulties of today and tomorrow, I still have a dream,” MLK famously said. “It is a dream deeply rooted in the American dream. I have a dream that one day this nation will rise up and live out the true meaning of its creed: ‘We hold these truths to be self-evident, that all men are created equal.’"

MLK of course had a Ph.D. in theology, and he studied and believed and thundered down the words that would indeed bring us all together. God was his ultimate foundation. He built in hard times and his foundation still stands — but it is under attack.

In the space of just a few short years, the Democrat Party has shifted further to the left than ever before, desperate to replace President Trump’s common-sense policies with a radical ideological agenda that would bankrupt taxpayers, dismantle the economy, and erode individual liberties. To make matters worse, many Democrats have openly embraced the recent riots and looting and armed conflicts in cities across America, in some cases even refusing to protect their own constituents.

Some prominent Democrats, including Reps. Ilhan Omar and Alexandria Ocasio-Cortez, have even embraced the radical demand to defund police departments — an idea so radical that the Democratic Party billionaire establishment class opposes. But these elites were too late in getting to The New York Times, CNN, and MSNBC before those outlets made it clear they were fully on board and sufficiently woke.

Even former President Obama recently admitted that the political landscape has tilted to the left in recent years, observing that the progressive platform he himself campaigned on would be out of place in the contemporary Democrat Party.

“[I]f I were running today, I wouldn’t run the same race, or have the same platform as I did in 2008,” Obama said in April, adding that “Joe [Biden] already has what is the most progressive platform of any major party nominee in history.”

As the Democrats have shifted to the left, of course, they’ve alienated many of the moderate voters who once supported them, particularly blue-collar workers whose interests are directly threatened by the big-government, pro-China, billionaire agenda offered by politicians such as Biden. The resulting civil war between those who want to bring the party back to its roots and those who demand radical change is threatening to tear the liberal electoral coalition apart at the seams.

Luckily, Republican voters are already unified behind the president to an unprecedented degree — poll after poll shows that a vast majority of GOP voters back Donald Trump in the upcoming election.

“Wow! 96% Approval Rating in the Republican Party (and I believe this was before the “GREAT” Jobs Numbers yesterday). Thank you!” President Trump tweeted in early June.

The reason there’s so much unity among Republican voters is obvious — President Trump has delivered on the promises he made in 2016, uplifting Americans who had previously been abandoned by their own representatives in Washington. He continues to stand with those formerly forgotten Americans today.

Unfortunately, some Republicans on Capitol Hill are unnerved by the president’s style and are not as determined as he is to fight the radical left each and every day. The left is currently taking real estate in Seattle, the University of Chicago, and Kentucky. The conservative movement is putting out white papers that theoretically show the left has contradicted itself. Well, DUH! China is leading a cultural revolution at home and abroad. It has separated its own people from free speech, religion, family, history, and their own culture. It is happy with the left’s messaging here, which seeks to accomplish the same.

There’s no time for equivocation. We need all hands on deck because Donald Trump is the only force that stands between limited government, small business, and the protection of our individual liberties and a radical shift to the left with high taxes, more regulations, and the end of MLK’s dream with their assault on our God-given freedoms. This may in fact be our last chance to save this great republic.

David Alan Brat is the dean of the Liberty University School of Business. He served as the U.S. representative for Virginia's 7th Congressional District from 2014 to 2019.