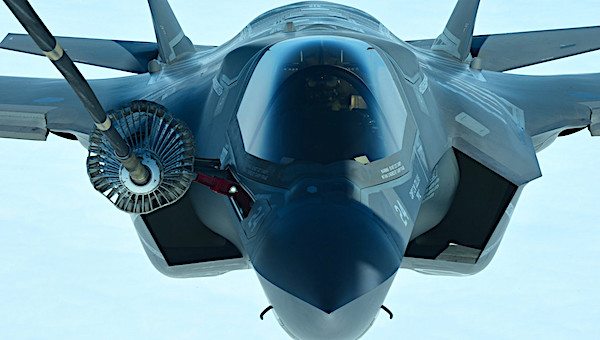 A U.S. Marine Corps pilot lines up a F-35B Lightning II to refuel from a KC-10 Extender, assigned to the 305th Air Mobility Wing at Joint Base McGuire-Dix-Lakehurst, N.J., July 4, 2020. The F-35B is part of a formation of military aircraft that flew over Boston, New York City, Philadelphia, Baltimore and Washington D.C. during a Salute to America event that celebrated the nation’s 244th birthday and provided the DoD an opportunity to demonstrate the capabilities and professionalism of the Armed Forces. (U.S. Air Force photo by Senior Airman Briana Cespedes)

Nearly 50 retired military officers have signed a letter supporting President Trump' consideration of federalizing the National Guard or mobilizing the military as a last resort to quell violence in cities where local government has lost control.

"Notwithstanding the non-stop hostility of the news media, President Trump has established a record of being cautious and restrained when using military power," they wrote in a letter published by the Washington Times. "We are confident that he will be extremely prudent in deploying the military domestically in such circumstances as may arise."

"We believe our president will do what is necessary to support and defend the Constitution and preserve this constitutional Republic," they said in the letter, which was commissioned by the Family Research Council.

"We stand with the president at this difficult time." 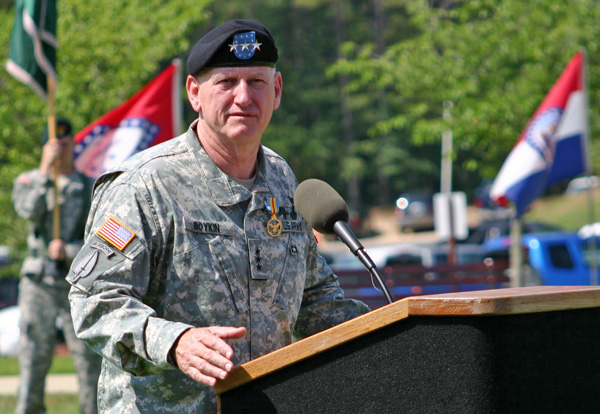 "We are retired flag-rank officers who support President Trump's recent declarations that the tolerance of widespread rioting and lawlessness by various U.S. state and local political authorities is unacceptable," they wrote.

"Furthermore, we write in opposition to the criticism by those who have claimed or implied that the deployment of the military to quell unchecked urban rioting would be an authoritarian departure from American history. Such claims are ill-informed and dangerous."

They noted they've seen the terrible effects of war on civilian populations.

"If the political leadership of a state and municipality refuses to stop an outbreak of violence or an insurrection that endangers the lives of American citizens, the president has been empowered to act by the Constitution and Congress through the Insurrection Act 0f 1807 to use the military to restore order," they argue.

"With respect to the use of the 'military' we include both the National Guard ('the Guard') and active duty military units," the letter states.

The Guard "is trained to operate" when local law-enforcement departments are overwhelmed.

If state and local governments fail to act to quell violence, "the president may federalize the National Guard and deploy them," they pointed out.

And there are extraordinary circumstances in which the military must be deployed. In 1957, for example, President Dwight Eisenhower signed an executive order sending troops from the Army's 101st Airborne Division to maintain order during the integration of an Arkansas high school. The Democratic governor had called in the National Guard to prevent black students from entering the school.

"We fervently hope and pray that state and local authorities will promptly restore law and order should there be further outbreaks of rioting," the retired military leaders said.

"But if not, President Trump has the authority to take extraordinary measures under such circumstances. We concur that the use of active duty military units should be a last resort, but we know that eleven presidents have invoked the Insurrection Act of 1807 on twenty occasions."

Meanwhile, Democrats are resisting President Trump's deployment of federal law enforcement officers from the Department of Homeland Security in response to attacks on federal and local statues and monuments nationwide in June.

They also demand that agents not be sent to other cities, claiming the administration is using federal authority "for political purposes," the Washington Examiner reported.

"The president and his administration continually attack local leadership and amplify false and divisive rhetoric purely for campaign fodder. Their words and actions have created an environment of fear and mistrust," they wrote.

On Tuesday, after Democratic leaders dubbed his agents "stormtroopers" and "Gestapo," Wolf defiantly rebutted criticism of his agency's response to rioting in Portland, vowing federal officers "will not retreat."

He urged rioters to "find another line of work."

"If you are a violent rioter looking to inflict damage on federal property or law enforcement officers, you need to find another line of work," Wolf said, reported Fox News. "We will not retreat, we will continue to protect our facilities and our law-enforcement officers."