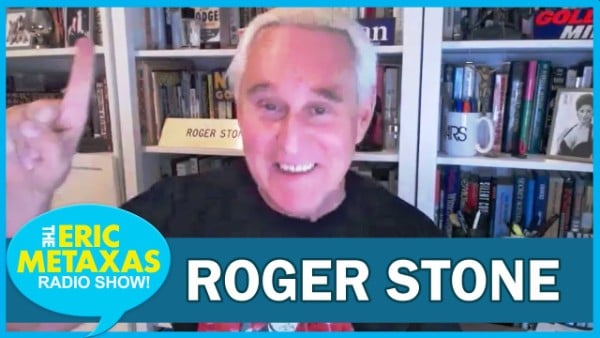 When Roger Stone stood up at a Franklin Graham rally in Florida last January in reponse to a call to receive Jesus Christ as his savior, it felt like a "cement block" had been removed from his chest.

Facing prison on process charges in Robert Mueller's special counsel probe, a number of people in his life had been urging him to turn to God, and he had been pursuing that path. But the moment he felt God's transforming grace, he said, came the afternoon of Jan. 18 at the Sunset Cove Amphitheater in Boca Raton, Florida, at Graham's invitation.

"All the tension in my neck and shoulders was gone. I was almost euphoric. I had a new confidence, I had a new outlook. It really was life-changing," he recalled in an interview Thursday with Eric Metaxas.

Referring to the criminal case against him, Stone said he was "no longer scared."

Prior to the public meeting, he had met privately with Graham, asking the evangelist to appeal on his behalf to President Trump. Stone explained that a court order prevented him from contacting Trump, his longtime friend.

Graham said that whatever many happen, whether he went to prison or not, his strong advice was to turn to God.

Stone said he knew that secular media would mock him, noting an article in the Washington Monthly calling his reported conversion a joke and a ploy.

"It doesn't matter what they think. All that matters is what he thinks," Stone told Metaxas, smiling and pointing his index finger skyward.

"And he knows what's in my heart."

Stone was indicted Jan. 24, 2019, by a federal grand jury for obstruction, false statements and witness tampering in the special counsel investigation by Robert Mueller probing alleged Trump campaign collusion with Russia. Mueller found no such collusion. And he couldn't find evidence of the claim that Stone collaborated with Wikileaks to release emails damaging to Hillary Clinton's campaign.

The next morning, at 6 a.m., 29 heavily armed FBI agents in 17 armored vehicles arrived at Stone's home, with a helicopter overhead and frogmen jumping off boats in the canal in his back yard.

CNN "just happened" to be on hand to record it all.

Metaxas said that, "as an American," he was "deeply infuriated and disgusted" that a citizen would be treated that way by the government.

Stone noted prosecutors had talked to his lawyer the day before.

"All they had to say is, we're charging your client, bring him in. And I would, certainly, have come in, voluntarily," Stone said.

Instead, his wife, who is deaf and didn't hear the commotion, woke up looking down the barrel of two rifles.

"She doesn't know if it's a home invasion. She has no idea what's happened. They don't know she's deaf, so it they shout a command at her, and she doesn't obey, I'm afraid they're going to shoot her."

The 73-year-old woman, who has rheumatoid arthritis, was then "frog-marched out in the middle of the street in her nightgown and bare feet."

She wasn't charged with any crime, Stone noted, but apparently "it was important that CNN got great footage of all that."

'The greatest decision that I've ever made'

In March, Stone recount to journalist David Brody his conversion at the Graham rally, calling it the greatest decision he had ever made.

"It doesn't matter how grievous your sins may be, they can be washed away, if you will simply accept Jesus Christ as your savior," Stone told Just the News in a podcast interview on "The Pod's Honest Truth." "This is the greatest decision that I've ever made. And I'm very at peace with it."

Stone said he has "chosen to walk with the Lord, and that has really made my burdens so much easier."