Most of my older readers know well about the term "Rosie the Riveter." But let me remind my younger fans.

History.com gave a great succinct summary: "Rosie the Riveter was the star of a campaign aimed at recruiting female workers for defense industries during World War II, and she became perhaps the most iconic image of working women."

Because so many males were enlisted in the military and deployed during the war, industrial workers were few and far between. So, women filled the gaps by joining the labor force.

"Between 1940 and 1945, the female percentage of the U.S. workforce increased from 27% to nearly 37%, and by 1945 nearly one out of every four married women worked outside the home," according to history.com.

"More than 310,000 women worked in the U.S. aircraft industry in 1943, making up 65% of the industry's total workforce (compared to just 1% in the pre-war years). The munitions industry also heavily recruited women workers, as illustrated by the U.S. government's Rosie the Riveter propaganda campaign." 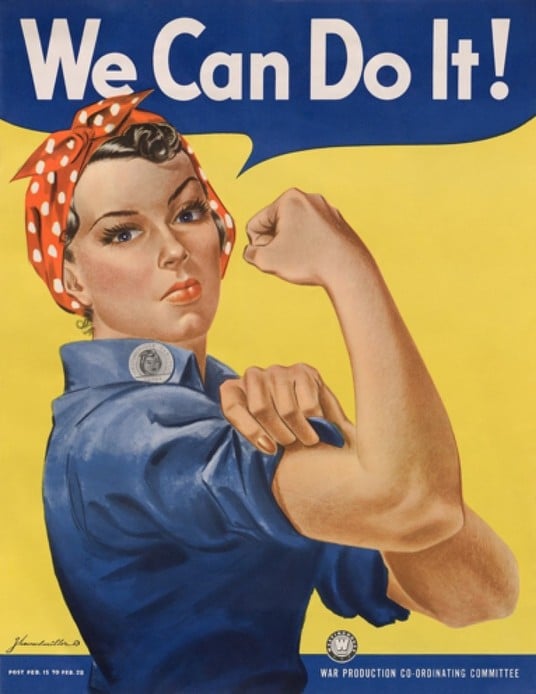 Mae Krier from Levittown, Pennsylvania, was one of the nation's original "Rosie the Riveters," or "Rosies" for short. At just 17 years of age, Mae and her sister left their hometown in North Dakota and headed to Seattle to join the war effort and workforce. They were employed by Boeing during World War II and built B-17 and B-29 bombers, according to USA Today.

At 94 years old today, with the recent spread of COVID-19 around the country, Mae's patriotism swelled and she again knew she needed to serve her country – so she set out to help by making masks. She makes them not only to protect people from the coronavirus but also to educate or remind others about the history and power of the Rosies. That's why her masks are made with the same red polka dot bandana that characterized the female Riveters and were used to keep their hair from getting wrapped up in manufacturing machinery. 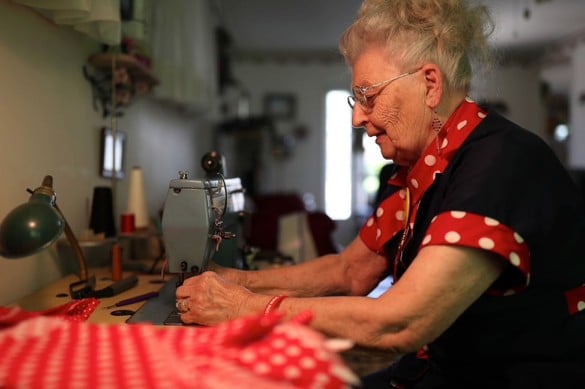 Now, please, don't get stuck here in any political entanglement about the rights or wrongs of masks. I'm merely highlighting and commending the actions of a nine-decade American patriot who is willing even at her age to get out of the bleachers and onto the battlefield.

She said, "People say to me, 'You helped win World War II and now you are helping our country win this battle over this virus.' These are nice things to hear."

Mae also explained that making the masks gave her something to do while she was quarantined: "It kept me from getting bored. … I've got to be careful. My only exercise I'm getting is my trip to the refrigerator," she quipped. Not to mention she still gets out on her riding mower to cut the lawn!

I assure you Ms. Krier has been anything but bored this year. Quarantine hasn't stopped her from serving her country at all.

Since March, she has been to the Pentagon four times, the Capitol three times and even to Normandy, France, for the 75th anniversary of D-Day, according to U.S. Department of Defense website. 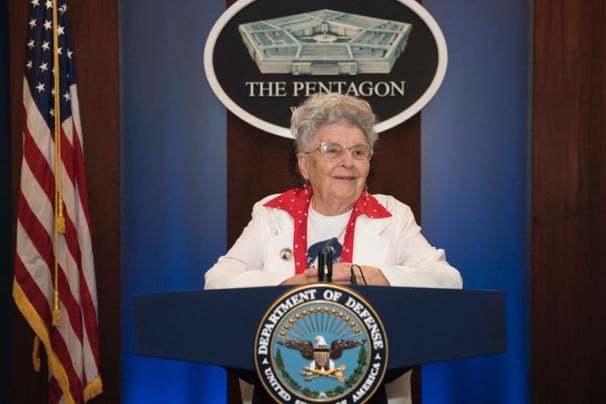 Ms. Krier at the Pentagon 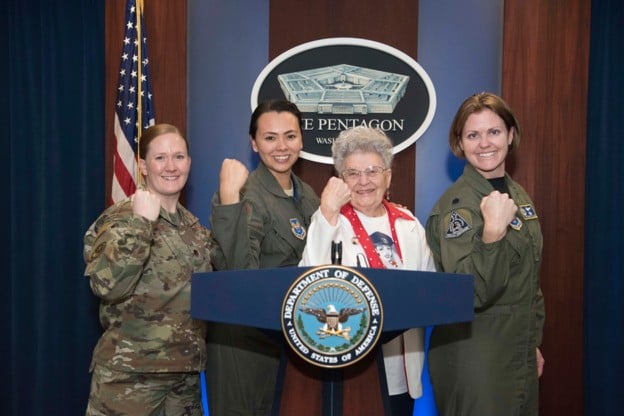 Ms. Krier has also been on a mission at the U.S. Capitol: "What our goal is, is to get the gold medal. … That's what we want to get for the Rosie the Riveters, the Congressional Gold Medal – the highest civilian award. We're running out of time. We're living history, what few of us are left. In a year or two, a few years, we're just going to be a page in a history book. … It's just the fact we want to be recognized for what we did … we did so much. We really worked hard."

The U.S. House of Representatives has recently agreed with Ms. Krier that the Rosies should be honored with the Congressional Gold Medal, and now it goes over to the U.S. Senate, where my wife, Gena, and I hope it passes.

And as for love, Mae married her sailor husband, Norman Krier, in April 1945 because "he was a good dancer." They had a son and daughter and were married almost 70 years before Norman passed at age 93.

I love Mae's final thoughts she gave to the Pentagon reporter about her service during WWII: "Up until 1941, it was a man's world. They didn't realize how capable American women were. We'd never had a chance to prove it. Hitler had said that he wouldn't have any trouble defeating us because he said American women couldn't produce. He said we spent too much time on cosmetics and silk stockings and frivolous things. I think we showed Hitler what American women were made of."

No surprise that this past Friday Mae was honored again by being the "Person of the Week" on ABC "World News Tonight."

Ms. Krier and the other Rosies remind me of a study Dr. Anthony Campolo shared about. In it, 50 people over the age of 95 were asked, "If you could live your life over again, what would you do differently?"

Thank you, Ms. Krier, for your service to our country since 17 years of age. You prove what Mark Twain said and I've always believed: "Age is an issue of mind over matter. If you don't mind, it doesn't matter."