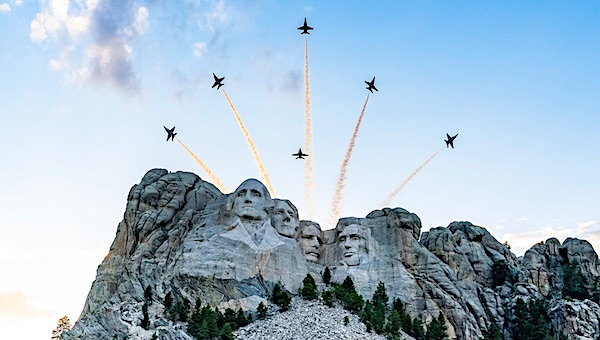 South Dakota Republican Gov. Kristi Noem has steered her state through the COVID-19 pandemic without ordering shutdowns or mandating masks.

She even attended the huge rally President Trump held at Mount Rushmore on the Fourth of July weekend, which saw no negative aftereffects.

"Trust your people," Noem said she would tell other governors. "Don't lay down mandates that are going to hinder the ability that they need to really get through this difficult time," she told Steve Doocy in an interview Friday on "Fox & Friends."

"Trust them. Give them the facts. Let them make decisions that are right for their families."

Cases are continuing to decline in her state.

"I think what we did here in South Dakota is really remarkable because we gave people their freedom," she said. "We let the businesses stay open, we let people go to work, we told them to be smart, and we also asked them to be personally responsible. And, we're seeing benefits of that each and every day in South Dakota."

The state Health Department reported only four new COVID-19 deaths in the state Thursday. The state's case total has not yet reached 8,000.

South Dakota's population is not quite a million, far below cities such as New York and Los Angeles.

"We did, in fact, we according to the national experts, did everything wrong," Noem said. "We did what the people on the ground saw. We aggressively addressed those situations, and came out better for it. So, I really think the people of South Dakota stepped up. They did the right thing and they trusted me. I trusted them and they made the right decision."

Noem and Trump came under heavy criticism for the July 3 event, which drew a mostly mask-free crowd of 7,500. Some establishment media outlets also bashed the monument itself, with a CNN reporter describing it as an honor to two "slave-holders" on land "stolen" from Native Americans.