The debate now surrounding the Emancipation Memorial that stands in Lincoln Park in Washington, D.C., is a critical discussion in which I believe all Americans of goodwill and those who want racial harmony should engage.

The memorial shows a standing President Lincoln with the Emancipation Proclamation in his right hand and Archer Alexander, the last slave captured under the Fugitive Slave Act, at his left in a position that has created historical debate since the statue was erected in 1876. 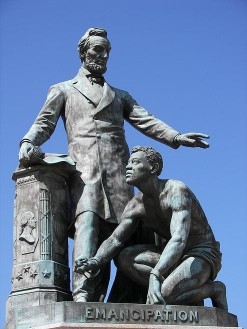 Those who are overturning and removing statues today have entered this debate not to participate in critical discussion that art is meant to provoke but to remove history they don't like. They seem to want to rewrite history and replace it with a history they prefer.

But is there something we might call truth? Facts? Is history about searching for those facts and reporting them as they are? Or is history about Hollywood, where we tell stories we want to hear that make us feel good?

The dismantlers tell us this is a portrait of white supremacy: the white president, he who holds the power, standing before the subservient black slave kneeling before him.

But if Lincoln was about white supremacy, someone should have told white supremacist John Wilkes Booth, who fired the shot into the president's head, assassinating him because he was a champion for the causes of liberty and racial equality.

We can read the famous words of Lincoln in his Gettysburg Address: "Four score and seven years ago our fathers brought forth on this continent a new nation, conceived in liberty, and dedicated to the proposition that all men are created equal. Now we are engaged in a great civil war, testing whether that nation, or any nation so conceived and so dedicated, can long endure."

The estimated number of casualties in that Civil War about that great principle – "that all men are created equal" – is 750,000, nearly 70,000 more than all the casualties of all the other wars in which Americans have fought combined.

Contrary to claims of the dismantlers, the freed slave Archer Alexander is not kneeling in servitude before the president but rather, according to many serious voices in this historic debate, getting up and looking out toward his freedom.

It is remarkable to read Alexander's story: how he was sold from one master to the next, all the while with his eyes toward freedom, exactly as he is depicted in the monument.

Alexander escaped slavery from his fourth master and was about to be returned just as Lincoln had signed the Emancipation Proclamation. While a fugitive, he was harbored by William Greenleaf Eliot, a pastor and abolitionist who wrote Alexander's biography and had presented a picture of Alexander to sculptor William Ball, the artist selected to design the memorial.

The Emancipation Memorial, also known as the Freedmen's Memorial, was paid for by funds raised entirely by former slaves, as they wanted to honor President Lincoln.

Now D.C. Rep. Eleanor Holmes Norton is introducing legislation to Congress to remove the Emancipation Memorial from Lincoln Park. She says, "The statue fails to note in any way how enslaved African Americans pushed for their own emancipation."

The Civil Rights movement was animated by the imagery of the Bible – of enslaved Israelites and the appeal to Pharaoh to "let my people go."

The Freedmen's Memorial captures, deeply and truly, the American struggle of people of different backgrounds working from their own stations toward mutual ideals.

I salute President Donald Trump's new executive order to establish a National Garden of American Heroes. He stated that the garden would include statues of American heroes from all walks of American life.

I propose that the new National Garden be in Lincoln Park surrounding this Freedmen's Memorial, and that the park be renamed Unity Park, to capture the theme of American heroism that captures all in our nation under one set of principles and one God.

Star Parker
Star Parkeris president of the Center for Urban Renewal and Education and host of the new weekly news talk show "Cure America with Star Parker."
@StarParker
The perverse agenda of Black Lives Matter
'The Poor People's Campaign' isn't really for the poor
The cost of Biden's big government
School choice: The only option in a divided nation
Equality Act slams the door on religious freedom
See more...