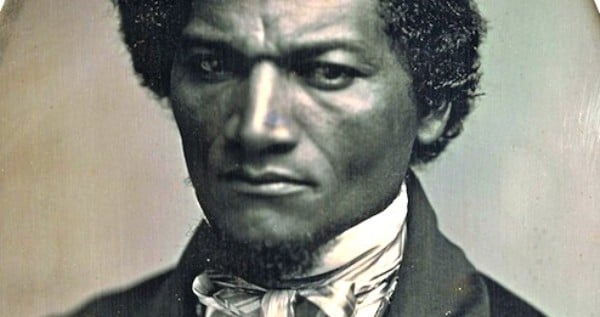 A statue of the iconic black abolitionist Frederick Douglass, who was born in slavery, was toppled on the anniversary of his famous 1852 speech chastising America for not living up to the values upon which it was founded.

Police in Rochester, New York, where Douglass is buried, said the statue was left leaning against a fence about 50 feet from its pedestal, reported the Rochester Democrat and Chronicle.

The site of the statue includes part of the famed Underground Railroad, where Douglass, Harriet Tubman and others helped slaves gain freedom.

Police are investigating, the paper said.

Leaders of a group called Re-energize the legacy of Frederick Douglass said they are shocked.

"This is all that is left at this particular moment of a monument that we put so much work and thought and love and care into," said the group's Carvin Eison.

Among the other memorials to the anti-slavery movement that have been vandalized since Memorial Day are the Shaw Memorial in Boston, honoring the first black volunteer infantry unit, and a statue in Philadelphia of abolitionist Matthias Baldwin.

Black Lives Matter activists who contend America is built on an irreedeemable foundation of white supremacy have cited Douglass' July 5, 1852, speech, titled "What to the Slave is the Fourth of July."

Douglass said that to a slave, Independence Day is "a day that reveals to him, more than all other days in the year, the gross injustice and cruelty to which he is the constant victim."

"Your high independence only reveals the immeasurable distance between us. The blessings in which you, this day, rejoice, are not enjoyed in common. This Fourth July is yours, not mine. You may rejoice, I must mourn," he said.

But Douglass – 11 years before the Emancipation Proclamation declared all slaves in Confederate territory free – made clear his fight was the fight of America's Founders, who affirmed that all men and women are created equal.

"They were statesmen, patriots and heroes, and ... with them, justice, liberty, and humanity were final; not slavery and oppression," he said of the Founders.

Douglass, who became a Christian minister and later an adviser to President Abraham Lincoln, chastised Christians and churches that supported the institution of slavery, calling out their hypocritical selective outrage.

"They convert the very name of religion into an engine of tyranny and barbarous cruelty, and serve to confirm more infidels, in this age, than all the infidel writings of Thomas Paine, Voltaire, and Bolingbroke put together have done," he said in the speech.

But Douglass – pointing to the leadership of Christians in Britain in abolishing slavery – believed the church and the Bible held the solution.

A Frederick Douglas statue in Maplewood Park was removed from its base overnight. pic.twitter.com/J43hqxuHTT

The Bible, a true reading of the Scriptures, and the Constitution, are the foundation for abolition, he said.

"Read its preamble, consider its purposes," he said. "Is slavery among them? Is it at the gateway? or is it in the temple? It is neither."

The Shaw Memorial, which was vandalized in the intitial days of the Black Lives Matter protests, honors the 54th Massachusetts Regiment, which was recounted in the 1989 Hollywood film "Glory."

Its granite backside was defaced with four-letter words and phrases such as "Black Lives Matter," "No Justice, No Peace" and "Police are Pigs," the Boston Globe reported.

The soldiers, under their colonel, Robert Gould Shaw, knew that if they had been captured in battle they could have been enslaved or killed.

The memorial features quotes by Douglass and Tubman, whose two sons enlisted in the Union Army.

In Philadelphia, a statue of outspoken abolitionist Matthias Baldwin outside City Hall was defaced over the May 30 weekend with the messages "colonizer" and "murderer."

But Baldwin, a locomotive manufacturing entrepreneur, was an outspoken critic of slavery, arguing for the right of blacks to vote. He founded a school in the city for black children.

"What is remarkable about this piece is that it's one of the first times black people were shown as individual people, as humans," said Liz Vizza, executive director of the Friends of the Public Garden, which is part of the Partnership to Renew the Shaw 54th Memorial Regiment.

"The installation reflects that," she told the Philadelphia Inquirer.

President Trump tweeted Monday that the vandalism of the Douglass statue "shows that these anarchists have no bounds!"