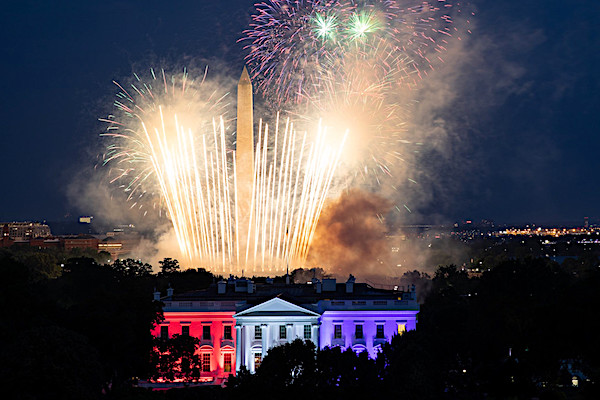 A firework display goes off at the Washington Monument in Washington, July 4, 2020. The display was part of the Salute to America event. (Official White House photo)

The U.S. Supreme Court on Monday ruled 9-0 that states can require Electoral College voters to select the presidential candidate they pledged to support and be punished for not complying.

"The Constitution's text and the nation's history both support allowing a state to enforce an elector's pledge to support his party's nominee — and the state voters' choice — for President," Justice Elena Kagan wrote for the court.

The cases, one from Washington state and another from Colorado, came after a group calling themselves "Hamilton electors" voted for moderate Republicans instead of Hillary Clinton in an effort to disrupt the election and send it to the House of Representatives.

In Colorado, one elector voted for John Kasich, instead of Clinton, who won the state's popular vote.

The majority opinion explained that in presidential elections, the votes of the American people "actually go toward selecting members of the Electoral College, whom each state appoints based on the popular returns."

"Those few 'electors' then choose the president."

The justices pointed out the states "have devised mechanisms to ensure that the electors they appoint vote for the presidential candidate their citizens have preferred. "

"With two partial exceptions, every state appoints a slate of electors selected by the political party whose candidate has won the state's popular vote," the justices said. "Most states also compel electors to pledge in advance to support the nominee of that party. This court upheld such a pledge requirement decades ago, rejecting the argument that the Constitution 'demands absolute freedom for the elector to vote his own choice.'"

The Supreme Court was asked to consider whether a state can penalize an an elector for breaking the pledge, and it held "that a state may do so."

"But as that vote approached, they decided to cast their ballots for someone else. The three hoped they could encourage other electors – particularly those from states Donald Trump had carried – to follow their example," the court said.

"The idea was to deprive him of a majority of electoral votes and throw the election into the House of Representatives."

The three voted for Colin Powell. But only seven electors across the nation cast faithless votes, which was well short of the goal.

Washington fined its faithless electors $1,000 each.

"The power to appoint an elector (in any manner) includes power to condition his appointment – that is, to say what the elector must do for the appointment to take effect," the ruling said.

Requiring them to pledge to support the candidate chosen by voters is within that authority, the ruling said.

Justice Clarence Thomas, in a concurring opinion, said it was a simple matter of the authority granted to states by the 10th Amendment.

"When the Constitution is silent, authority resides with the states or the people," he wrote. "This allocation of power is both embodied in the structure of our Constitution and expressly required by the Tenth Amendment."

Colorado's faithless elector was removed from his post and a replacement was named.