The nation is on its back. Domestic terrorists of all races, sexes and persuasions roam the streets, particularly of major American cities, inciting and carrying out violence, sometimes fatal, against the populace; the COVID-19 pandemic continues to threaten and harm the citizenry's health and well-being; and the executive, legislative and judicial branches of government, mired in their own lawlessness, corruption and deceit, simply turn the other cheek. Our politicians, merely a clown show would it not be for the fact that their disgusting conduct is not funny, spend most of their time, when they are not having money from special interest lobbyists stuffed into their filthy pockets, simply going on Fox News, MSNBC and CNN to feather their own nests and boost their egos.

If the republic is to survive even a short while longer, following our downward slide for the last 244 years since it was founded in my birthplace of Philadelphia, We the People must turn cable news off, a purveyor on all sides of fake news and false hope to boost ratings and rake in the ad dollars, get up off of the couch and take matters into our own peaceful and legal hands.

And that is why my latest work, which can be advanced purchased at Amazon.com, BarnesandNoble.com and all major booksellers on the internet, is so important.

The sequel to my autobiography "Whores: Why and How I Came to Fight the Establishment!," published in 2009 – 11 long years ago – and "Essays of a Mad Man," the four volume compilation of all the columns I had written since my years at Judicial Watch and now Freedom Watch, both of which I founded, is aptly called "It Takes A Revolution: Forget the Scandal Industry!" As I am sure you patriots will recognize, the title mocks the work of the "First Lady of Crime," Hillary Clinton – but rather than arguing for a socialist body politic, the book seeks to unleash the "Village People" to clean up corruption in the swamp, in order to restore the vision and creation of our Founding Fathers with hard and decisive peaceful and legal action.

I will not reveal in this column all that I have to say to you. You have to read the book and listen to the words as well of Ambassador Alan Keyes, who honored me by writing the foreword. Alan's intellect – far beyond anyone else who has run for president, at least in my lifetime, and I am now 69 years old – is at the level of our Founding Fathers, the same ones the radical left has been trying, especially recently, to relegate to the ash heap of American history, much as their fellow Bolsheviks did with the czar.

But the thesis of the book, which is dedicated to Thomas Jefferson, whom I consider to be the greatest of our Founding Fathers and one of our finest presidents, is that the American people are presently left defenseless because, with a few exceptions, the federal judiciary, which Jefferson opposed, has become a den of despots unaccountable to the citizenry.

Indeed, here is what Jefferson predicted would occur thanks to an unelected federal judiciary with life tenure, cloaked with immunity from being held to legal account:

"You seem to consider the judges as the ultimate arbiters of all constitutional questions; a very dangerous proposition indeed, and one which would place us under the despotism of the oligarchy. Our judges are as honest as other men, and not more so. They have, with others, the same passions for power, and the privilege of their corps. … Their power is more dangerous as they are in office for life, and not responsible, as the other functionaries are, to elective control. The Constitution has erected no such single tribunal, knowing that to whatever hands confided, with the corruptions of time and party, its members would become despots. It has more wisely made all the departments co-equal and co-sovereign within themselves." [letter to William Jarvis, 1820.]

And that is the essential problem. Federal judges are in principle our most important public officials, as they were created with the now provably naïve notion that they would serve as a check to the tyranny of the other two branches of government and ourselves. Instead, unelected and not accountable to the We the People, and armed with life tenure and immunity from suit, they have become tyrants themselves.

"It Takes a Revolution: Forget the Scandal Industry!" does not just make bold assertions; it backs them up with my specific life experiences in fighting in the trenches of our legal system for the last 43 years since I was sworn in as an attorney by the Florida Supreme Court, ironically on Dec. 7, 1977 – the anniversary of Pearl Harbor. Since then, I have seen how the foundations of our government and legal system have been under sneak attack, not by the Japanese, but as a result of our the complacency, negligence and malevolence on the federal bench in particular.

The book is thus a clarion call for all of us patriots to mount up like Paul Revere and offers ways and means to return ethics and morality to our body politic, not by pontificating but by taking action! In that respect, "It Takes a Revolution" is much different from any other work that is currently on bookshelves. And, I do not crow about my accomplishments as the heads of Judicial Watch and now Freedom Watch, but openly admit that my successes have barely scratched the surface. 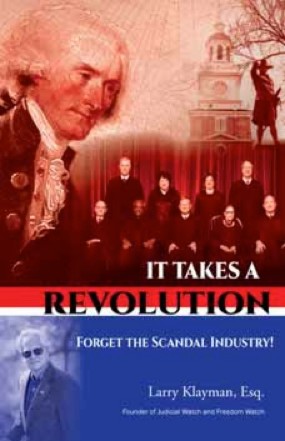 In these trying times, the time is for humility and a realization that our beloved nation is slipping away and facing extinction like ancient Rome and other great civilizations. The barbarians are already within our gates, wreaking terror on our cities and neighborhoods, and We the People, with God's Grace, must spring into action! We can no longer look to our federal judges, nor any public official, to save the republic. Like our Founding Fathers and the colonies, we must do it for ourselves!

How to wage a peaceful revolution to restore rule of law, ethics, and morality to the nation.

With a title that satirically mocks Hillary Clinton, this book details how our executive, legislative, and judicial branches of government have become thoroughly corrupt and failed the citizenry. This work is a call to arms during these times of crises, when government corruption has hit a "cancerous state." The overriding message is that Americans should turn off cable news, get up off of the couch, and join the second American Revolution to restore the greatness of our nation in these perilous times.

Pre-order from Amazon or Barnes & Noble