Economist and author Thomas Sowell warned that a Joe Biden presidency could be the "point of no return" for America.

"If the election goes to Biden, there's a good chance that the Democrats will control [Congress] and considering the kinds of things that they're proposing, that could well be the point of no return for this country," he said in an interview that aired Sunday on "Life Liberty & Levin" with Mark Levin. 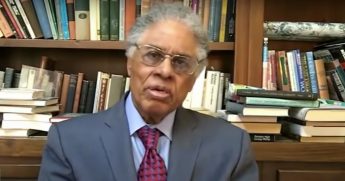 Sowell said that even though he is regarded as pessimistic he was "never pessimistic enough to think things would degenerate to the point where they are now where adult human beings are talking about getting rid of the police."

"I never dreamed we'd come to this point. It just seems such utter madness," he said. "And what is frightening is how many people in responsible positions are caving in to every demand that is made, repeating any kind of nonsense that you’re supposed to repeat."

Sowell, who turned 90 last month, has served on the faculties of universities such as Cornell and UCLA. Since 1980, he has been a fellow at the Hoover Institution at Stanford University.

Levin asked Sowell about the left's claim that America is beset by "systemic racism."

"What does that mean? And whatever it means, is it true?" Levin asked.

"It really has no meaning that can be specified and tested in the way that one tests hypotheses," Sowell replied.

He said the currency of the phrase reminds him of the "propaganda tactics" of Nazi Germany, based on the premise if a lie is "repeated long enough and loud enough" it would be widely believed.

Levin said most of the protesters don't live in the communities they claim to support and, instead, live among the people they claim are oppressors.

"They're absolute hypocrites," Levin said. "They claim they want equality for all. They claim that there'll be the withering away of the ... police departments ... and yet every time you look at a Marxist state, it is an authoritarian, top-down, centralized police state."

Sowell agreed, saying that activists who claim to be casting off racial and class differences end up only creating their own "nomenclature" and establishing their own hierarchies.