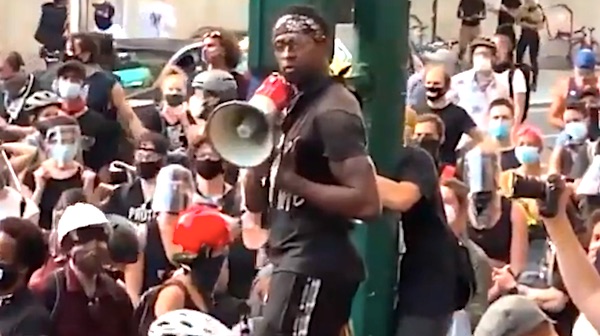 An unidentified man delivered a speech to a group of protesters in front of New York City’s City Hall Tuesday saying that he wanted to hang police, step on their necks and “neutralize” them, a Daily Caller News Foundation video shows.

“I want to neutralize them, like they do us,” the man said, “I want to hang him from a f**king tree like he do us,” said the man as he stood on top of what appeared to be a trash can and gave a speech to fellow protestors, the DCNF video shows.

Protesters across the country have demanded action against police brutality and racial discrimination since the May 25 death of George Floyd, who died in Minneapolis police custody after a former officer knelt on his neck for nearly 9 minutes

Protesters have occupied the area surrounding City Hall for several days demanding the New York City Police Department’s budget be cut by $1 billion, along with demanding the department go through systematic change to address police brutality.

The NYPD attempted to dismantle the protest zone Wednesday morning.