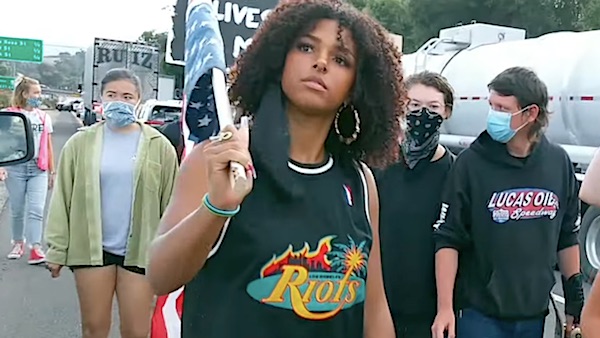 A video has emerged of Black Lives Matter activists halting traffic on Highway 101 in central California, including a vehicle carrying a pregnant woman to a hospital.

They explained to the woman and others in the vehicle that they wanted to talk about race issues.

The Press California reported a passenger in the car told the marchers: "She is going to give birth. Get out of the road."

Then she walked away.

The confrontation happened July 21. It protest began in a city park, then moved to public roads, where the group blocked traffic for an extended time.

"They chased down, harassed and prevented drivers from exiting the highway. When demonstrators returned to town, Arata, brandishing an American flag, pursued several cars and hit one of them with a flagpole," the report said.

They also smashed the rear window of one car, spreading shattered glass all over a 4-year-old in the back seat, the report said.

Arata later was arrested on charges of participating in a riot, unlawful imprisonment and resisting.