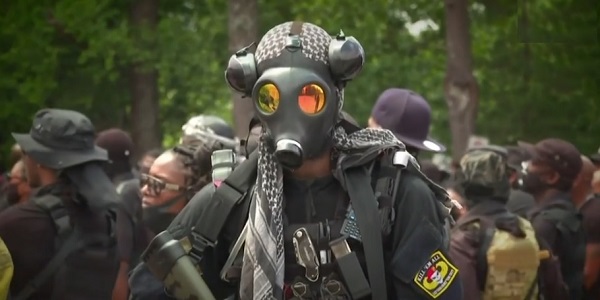 The July 4 event in Stone Mountain lit up social media sites with chatter about the group's goals and military capability.

Georgia's law enforcement community has for the most part dismissed the militia group's demonstration as inconsequential bluster.

According to the nonprofit group Georgia Law Enforcement, which posted a description of the event on Facebook, an armed group of up to 300 “protesters” marched through the streets of Stone Mountain carrying weapons and yelling racially charged slogans.

They proceeded to enter Stone Mountain Park, home of the nation's largest Civil War monument featuring the images of Confederate leaders Jefferson Davis, Robert E. Lee and Stonewall Jackson carved into the side of a granite mountain. According to a July 8 Fox News article, the city of Stone Mountain is receiving increased calls to remove the monument, but that would take an act of the Georgia legislature.

According to the July 5 post from GeorgiaLeo.org describing the demonstration by the black militia:

“'Protestors' from the self-proclaimed 'NFAC – Not F*cking Around Coalition' marched through the streets of Stone Mountain Georgia yesterday chanting anti-white, anti-BLM, and anti-Police sentiments. Along the way their leader stopped and berated white drivers asking them for reparations and telling them to 'go on with your white denial before you lose your life' when they laughed in his face.

“We had these videos sent to us by dozens of followers, and we scoured over them trying to find out what the actual goal or message of the 'protest' was, but it seems like it was only intended to spread the above hate messages.”

The racial rhetoric did not stop there. The militia leader also threw out taunts to rival white militia groups, naming the Three Percenters and the Boogaloo Boys:

"I don’t see no white militia, the Boogie[sic] Boys, the Three Percenters and all the rest of these scared-ass rednecks. We here, where the **** you at? We’re in your house… let’s go!"

Watch the militia march through town below:

Why is a heavily armed para-military group allowed to march in Stone Mountain, GA, without police intervention? (Identifies themselves as a black only membership "Black Power" entity when actually populated by whites) Another Democrat stunt? Video at: https://t.co/Kx8do6A4g4

This activity did not happen in a vacuum. The Atlanta area has been a hotspot for racial violence since the controversial shooting of Rayshard Brooks on June 12 in a Wendy's parking lot. Brooks was about to be handcuffed for drunk driving when he started fighting with two white police officers, grabbed their Taser and ran. The cops chased him on foot and just as Brooks turned and fired the Taser he was shot dead.

On June 20, a couple drove up to a roadblock manned by a black mob near the same Wendy's on University Avenue. They had their car windows smashed, the driver was punched in the face and they were told no whites were allowed to pass through what was essentially a new autonomous zone.

Law enforcement does not know the identities of the individuals marching through Stone Mountain Park because they wore facemasks and had very little engagement with police.

What is known is that the Stone Mountain area contains one of the highest concentrations of Muslim refugees in the Southern United States and some of the marchers could be heard chanting “Alhamdulillah.”

“'Alhamdulillah' means 'Thanks be to Allah' and is not usually said except by observant Muslims," noted Robert Spencer of Jihad Watch.

Stone Mountain is known as the symbolic birthplace of the modern KKK. This makes it a flashpoint for a triggering event.

But law enforcement in the area doesn't seem concerned.

"If it's public land, they have every right to be there and we have no right as law enforcement to question them, ask for their papers, any of that stuff," said Jimmy Callaway, police chief in the city of Morrow about 25 miles south of Stone Mountain. "I know it's disturbing to some people but it's almost the same thing as what the Boogaloo Boys, a far right militia, has done at the state Capitol, parading around with their guns. Is it a huge threat to where I'm at? No, I think it was more show than anything else. Some of those weapons were a joke. Some had some pretty nice ARs, but a lot of what I was seeing was low-end stuff."

Callaway did concede that some of the confrontations captured on video, particularly the situation in which the militia leader stopped a white man's car and demanded he pay reparations, were "disturbing."

They were engaging with motorists who didn't want to be engaged with, and that's outside the bounds of one's First Amendment rights, Callaway said.

David Bores, a retired police chief in Woodstock, a suburban community north of Atlanta, said he spoke with a high-ranking officer at the Stone Mountain Park Police Department, who similarly dismissed the demonstration as nothing much to worry about.

He said the wave of violent crime sweeping through major cities should be seen as a red flag for the surrounding suburban communities. Armed militias are now part of the mix, and any militia that can place 250 to 300 men and women under arms should be taken seriously, especially when they are displaying hostile body language and calling out opposing militia groups for a fight.

"Major cities are a powder keg. And it's just a matter of time before they decide they have to take that and move it into the suburbs," said Bores, who now works as a consultant to law enforcement agencies.

Bores said most suburban and rural law enforcement agencies are "woefully unprepared" for the next step in the ongoing racially charged uprising sweeping across America.

"Oh without question, they have no clue. They don't understand the Islamic threat, they don’t [understand] the Marxist threat," Bores said. "They're not getting any training on any of that. I no longer give any training at the Georgia Police Academy only because they say their budget has been cut back considerably."

He said the FBI decided to change gears during the administration of former President Barack Obama, turning away from intelligence gathering on Islamic and Marxist elements and focusing instead on white nationalist groups as the biggest threat to America's domestic security.

"For the most part they're just absolutely clueless on the nature of this threat," Bores added. "The purge of FBI training manuals in 2011 and 2012 removed any meaningful training on the Islamic threat at the national level and this has rippled down to the local level."

That focus hasn't changed much under the Trump administration and now the Marxist and Muslim groups are working together.

"As we saw in Stone Mountain, there is a nexus there between the jihadists and Black Lives Matter and these anarchist groups," he said.

Not only are law enforcement not taking the threat seriously, many of the commenters on conservative Facebook groups chose to dismiss the July 4 event with words like "laughable" and "comical."

Again, Bores says such statements are borne out of ignorance about what's happening and how well organized these far-left militias have become.

"That's just a way to keep your head in the sand. When you mock your own enemy, that's a good indication you don't have a clue, so you make fun of your enemy, you trivialize him and it makes you feel better," Bores said. "That way you don't have to do anything."

In the video below, posted to Twitter by former NYPD cop John Cardillo, one of the militants can be heard telling a white motorist, "We're not Black Lives Matter, none of that bulls**t. We're black power. We're your worst nightmare."

Approaching someone’s car armed because they’re white and demanding “reparations” is perilously close to felony armed robbery and is most definitely a hate crime.

Many observers have warned that it's just a matter of time before Marxist revolutionaries turn their focus from statues – mere symbols of America – to living, breathing people with whom they have a vendetta. They want reparations. They want revenge against Trump supporters. They want wealth redistribution and the seizure of private property, and they are ready to spill blood in pursuit of their goals.

One might expect the mainstream media to be AWOL on a story like the one that played out in Stone Mountain, where a leftist militia makes a show of force. But where is the FBI?

Will Stone Mountain serve as a wakeup call? Bores said it's easier to debunk and laugh about it. So he's not optimistic things will change anytime soon.

While the silent majority remain focused on the upcoming presidential election, watching polls, listening to speeches and reading articles about political maneuvering, the left is arming up, training in weapons and strategically planning their next move.

Others have noticed the same pattern. Author-journalist Lloyd Billingsley had this to say in a July 3 article in FrontPage Magazine:

"Americans have little choice but to protect themselves against the well-funded, highly organized forces of the left. When Americans do attempt to protect their lives and property, they find themselves all alone, like the couple in St. Louis, with no local or national network to back them up."

Billingsley is encouraging Americans to form armed networks that can respond to defend fellow patriots who come under attack by leftist mobs.