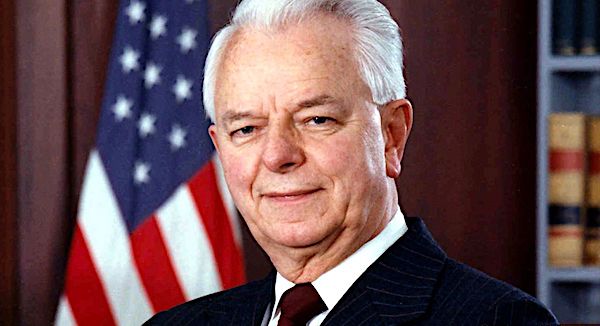 CHARLESTON, W.Va. – While monuments and building names said to be stained by racism are being erased across the country, one former Ku Klux Klan organizer remains virtually untouchable.

The late Sen. Robert C. Byrd, the West Virginia Democrat and Senate majority leader who organized a Klan chapter in 1941 and filibustered the Civil Rights Act of 1964, is celebrated in the state, his name gracing over three dozen public works projects, including two federal courthouses, a dam on the Ohio border, libraries, community centers, roads, bridges, schools and several university buildings throughout the state.

Byrd’s still hallowed legacy came into question this month when tiny Bethany College, in the state's narrow Northern Panhandle between Ohio and Pennsylvania, removed Byrd’s name from its health center. In a statement, school President Tamara Rodenberg said, “The last few weeks, and well before the conversations and calls for change took hold, we recognized as a campus that the name of our Robert C. Byrd Health Center created divisiveness and pain for members of Bethany community, both past and present."

Twenty-nine of the college’s 35 board officers are from outside West Virginia. The move came even though a petition effort on Change.org failed to achieve its goal of 1,000 signatures.

The state’s political leaders have not expressed similar concern, and Byrd’s tarnished past has failed to gain any traction as a 2020 election issue in West Virginia. Nothing has been proposed in the Republican-controlled legislature to rescind Byrd commemorations, and the 14 sitting Democratic state senators, all white, have been silent. None of the latter responded to emails or calls from RealClearInvestigations about what should happen, if anything, to Byrd’s many tributes, notably a larger-than-life bronze statue in the state capitol whose design was backed, when he was a state senator, by West Virginia's most prominent politician, Democratic U.S. Sen. Joe Manchin.

Also declining to comment was State Democratic Party chair Belinda Biafore, who in 2017 commemorated what would have been Byrd’s 100th birthday with a tribute on the party’s website, saying that “he represented fairness, strength and integrity.”

“Silence is a sign that there is some other force operating,” said Wilfred McClay, a historian and a professor at the University of Oklahoma. That’s explained in part by Byrd’s role as a master of pork during his record-setting Senate tenure (from 1959 until his death in 2010), bringing an estimated $1 billion to his home state, and state lawmakers’ gratitude expressed by placing his name on projects delivered.

Unlike the long-dead figures whose statues and other honorifics have been assailed in recent weeks, Byrd served recently enough that many people still active in politics worked alongside him. Presidents Barack Obama and Bill Clinton, as well as former Vice President Joe Biden, all delivered eulogies at his funeral in 2010.

In addition, Byrd’s legacy is tempered by the fact he spent the latter part of his life apologizing for his past. So far, that apology was convincing enough that he can mostly escape the wave of vandalism and shaming that is sweeping America’s tributes to anything deemed insensitive by those who claim America was formed in a whirlwind of racism that still endures.

As things have remained relatively quiet in West Virginia, elsewhere statues of Christopher Columbus, George Washington and several Confederate leaders have been knocked down by demonstrators and their less peaceful cousins, rioters. Princeton University, where Woodrow Wilson was president before becoming the nation's president, will remove his name from its public policy school and a residential college because of his "racist thinking." Even Abraham Lincoln may not be spared – Boston Mayor Marty Walsh said he would consider an argument to remove a statue of the 16th president.

“This is an era where you can’t live anything down,” McClay said. “We’re reaching back to Columbus and [Franciscan missionary Junipero] Serra, and it’s a moral standard that no one can stand up to.”

Byrd’s absolution, as it stands, appears to result from apologies that were “very sincere,” said C. Damien Arthur, an assistant professor of political science at Marshall University, who is writing a biography of Byrd.

“I don’t know if the apology warrants the past,” said Arthur, who is white. “There are all these buildings and programs named after him in the state. It’s part of history, and the apology is important, but does it erase it? I can’t answer that because I’m not a victim of it.”

The mix of politics and morality that informs such thinking is often hard to calibrate, and many see a double standard favoring Democrats, whose party held sway in the South during much of its racism-scarred, post-slavery history. Republican Sen. Trent Lott was accused of racism in 2003 for the way he praised onetime segregationist Dixiecrat-turned-Republican Strom Thurmond at a birthday celebration. Lott quickly apologized but he was still forced to step down as Senate minority leader. In 2019, it was discovered that the 1984 medical school yearbook page for Democratic Virginia Gov. Ralph Northam featured a picture of an individual in a Klan outfit next to a person in blackface. Northam initially apologized, but then denied knowledge of the photo and survived politically, in part because the state’s lieutenant governor was accused by two women of sexual misconduct.

Byrd’s political legacy, though, is all but untarnished, and efforts to address any hint of his indiscretions are muffled. Petitions at Marshall University in Huntington, W.Va., seek to remove the names of Byrd and Confederate Gen. Albert Gallatin Jenkins from campus buildings. The petition targeting Byrd is nearing its goal of 1,500 signatures.

A committee formed at the university in 2018 to examine building names on campus released a 12-page report of “observations and recommendations” last year, with no mention of Byrd or the buildings bearing his name. Some of the buildings named for Byrd were erected using federal funds he obtained as chair of the Appropriations Committee, a post he held for 20 years.

Byrd was “a fearless champion who fought tirelessly for all West Virginians and for our great nation” Charlotte Weber, director of the Robert C. Byrd Institute for Advanced Flexible Manufacturing at Marshall, wrote in an essay honoring Byrd upon his death. Weber did not respond to an interview request.

University President Jerome Gilbert was unavailable for an interview, a school representative said.

The process of changing the name on a building or project varies by jurisdiction. West Virginia allows state buildings, roads or other projects to be named for individuals living or deceased.

Congress attaches names to post offices, courthouses, and other federal buildings and projects as part of a commemorative process. It’s done through a committee process, with varying rules regarding the names.

For example, the Senate Environment and Public Works Committee, which can name infrastructure projects, may not name a building for a living person unless that person is a former president, a former member of Congress or of the Supreme Court 70 years old or more, or a federal judge 75 or older.

Leading Democrats support the removal or reassignment of memorials linked to the Confederacy, which they say is part of a national heritage of racism. House Speaker Nancy Pelosi has asked Congress to approve the removal of 11 Confederate monuments from the Capitol.

Some Republicans question the motives and timing of such requests. “Pelosi has been speaker for a long time and she could have done this before,” said Deroy Murdock, a black conservative political commentator. “She even had a majority for a time; why didn’t she do this then?”