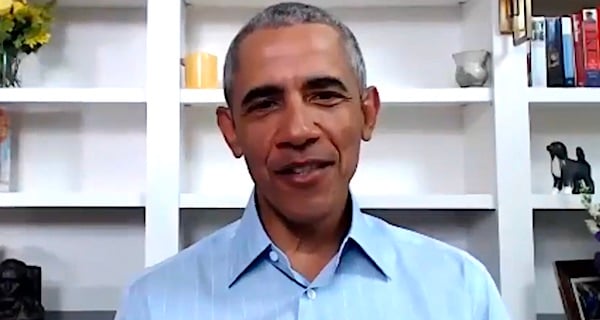 As his reelection campaign gathered momentum in the spring of 2012, President Obama tossed a little rhetorical stink bomb at the opposition party. Needling Republicans for their intransigence on taxes and the federal debt, Obama said the 21st century version of the Grand Old Party would be unrecognizable to its own patron saint.

“Ronald Reagan, who, as I recall, is not accused of being a tax-and-spend socialist, understood repeatedly that when the deficit started to get out of control, that for him to make a deal he would have to propose both spending cuts and tax increases,” Obama said. “He could not get through a Republican primary today.”

It was an argument reprised by Joe Biden four years ago. But Democrats aren’t the only ones who have espoused such heresy. In 2010, Republican Sen. Lindsey Graham told Robert Draper the same thing: “Ronald Reagan would have a hard time getting elected as a Republican today.” Mike Huckabee made a similar point in 2011; Jeb Bush said it in 2012; and Bob Dole did so in 2013.

This may be the wrong way to look at it, however. Political parties evolve over time, as do politicians themselves. Moreover, natural talents like Reagan and Obama don’t come along often, and when they do, they tend to get nominated. Yet, a relevant parallel exists between those two past presidents that underscores Obama’s point about the Gipper, but which also applies to the O-man himself.

Both men burst onto the scene with electrifying speeches that captivated the popular imagination. In 1964, Reagan’s nationally televised endorsement of Barry Goldwater was so galvanizing to conservatives -- and was subsequently delivered so many times by Reagan -- that it became known simply as “The Speech.” When Reagan first delivered it, Goldwater was about to lose in a landslide, but conservatives had found their muse anyway. “Reagan for President” clubs sprung up spontaneously across the country.

Forty years later, Barack Obama was launched like a rocket into national prominence by a stirring keynote address at the Democrats’ nominating convention in John Kerry’s home state. When he delivered it, Barack H. Obama was merely a state legislator in Illinois, little known outside of Springfield and the city of Chicago. By the time he finished, Obama was a plausible Democratic Party presidential candidate in his own right.

But if one fast-forwards to 2020, and applies Obama’s logic, a natural question arises:  Could he even give that speech today at a Democratic convention? And if he did, would the delegates applaud politely and then privately suggest to the young man that he was in the wrong political party?

Although Obama’s July 27, 2004, Boston keynote speech was lyrically written and flawlessly delivered, what made it so special was its reverence for America’s founding ideals, and an uplifting message that these ideals can still unite us as a people.

An African American man with the middle name Hussein, he began by embracing his unique heritage, punctuating the opening with a line offering the kind of praise for this country we rarely hear from the left side of the political spectrum these days: “I stand here knowing that my story is part of the larger American story, that I owe a debt to all of those who came before me, and that, in no other country on earth, is my story even possible.”

But this was not a speech about identity politics. It was, instead, his version of “the shining city on the hill.” America’s original source of greatness, Obama pointed out -- as had Abraham Lincoln, Frederick Douglass, and, yes, Ronald Reagan before him -- was the Declaration of Independence.

“Tonight, we gather to affirm the greatness of our nation, not because of the height of our skyscrapers, or the power of our military, or the size of our economy,” he said. “Our pride is based on a very simple premise, summed up in a declaration made over 200 years ago: ‘We hold these truths to be self-evident, that all men are created equal. That they are endowed by their Creator with certain inalienable rights. That among these are life, liberty and the pursuit of happiness.’”

These days, the Declaration of Independence isn’t viewed by those on the left as a source of pride, but of disappointment, even scorn. The peculiar premise of the New York Times’ “1619 Project” is that America's founding was not a noble experiment in self-governance but a plot to ensure the subjugation of black human beings. Notwithstanding that this is historical bunk, it is the intellectual neighborhood inhabited in 2020 by the ascendant wing of the Democratic Party and much of the establishment media. Freedom of speech? A trick to ensure white supremacy. Pursuit of happiness? That’s your “privilege” talking.

But in 2004, Barack Obama wasn’t an apostle of being “woke.” Alluding to both the Declaration and the Constitution, he said that our nation’s promise was present from the founding.

“That is the true genius of America, a faith in the simple dreams of its people, the insistence on small miracles,” Obama said. “That we can tuck in our children at night and know they are fed and clothed and safe from harm. That we can say what we think, write what we think, without hearing a sudden knock on the door. That we can have an idea and start our own business without paying a bribe or hiring somebody’s son. That we can participate in the political process without fear of retribution, and that our votes will be counted -- or at least, most of the time.”

The most famous passage from that speech, one which many Obama supporters can still recite by heart, no longer fits the Democrats’ militant approach to politics, however, and would be seen by today’s progressives as apostasy.

It would be reassuring to hear some of those sentiments expressed in this year’s Democratic Party convention keynote address. But doing so would constitute an explicit rebuke of liberalism, circa 2020. The animating ideological force on the left is the Black Lives Matter movement, which holds that there is most definitely a black America and a white America.

According to BLM's view, the former is a community of people who have been (and continue to be) victimized in all manner of ways by racist systems set up by the latter, and America will remain an unjust society until those structures have been completely dismantled. There is no tolerance for dissent of any aspect of this ideology, any who disagree are shouted down, silenced, and labeld a bigot.

The Democrats' 2020 worldview is a far less inclusive vision than Obama espoused in 2004, the opposite one, really. But to crib one more time from his memorable address, “In the end, that’s what this election is about.”