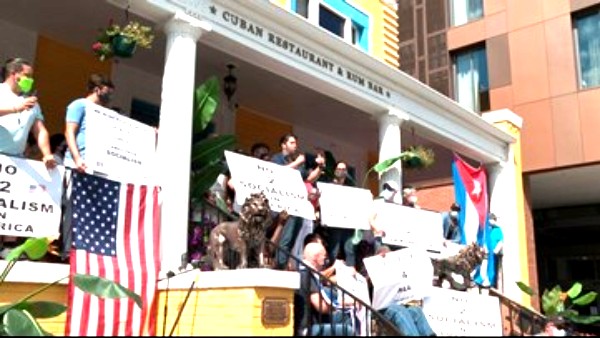 Members of the Cuban community in Louisville, Kentucky, ralled Aug. 2, 2020, in support of a restaurant owner accused of racism for speaking out against the "mafia tactics" of Black Lives Matter activists (Video screenshot)

Claiming Black Lives Matter activists are trying to extort local businesses, members of the Cuban community in Louisville, Kentucky, ralled on Sunday in support of a local restaurant owner.

The rally came as the owner of La Bodeguita de Mima, Fernando Martinez, was accused of racism for publicly criticizing the "mafia tactics" of protesters he claims are trying to intimidate him and other business owners, reported WHAS-TV, the ABC affiliate in Louisville.

In a letter, they demanded the businesses of Louisville's NuLu community have a minimum of 23% black staff, purchase a minimum of 23% inventory from black retailers or donating 1.5% of net sales to a local black nonprofit or organization, the Louisville Courier-Journal reported.

Martinez -- who fled Castro's communist Cuba on a raft when he was 18 -- was joined by people outside the Cuban community as well.

He made it clear he's not against the black community.

"It doesn't matter the color of your skin, your sexual preference. My son is gay and I am proud of him. For people to call me a bigot, a racist, it's not right, it's not fair," Martinez said.

Martinez even had the support of the head of the Revolutionary Black Panther Party of Kentucky, Ahamara Brewster, WHAS reported.

"It's just unethical and that's not how you handle business," he said of the BLM tactics.

"If you want help from someone, there's a way of going about it, being diplomatic about it. But you don't threaten anybody," Brewster said.

At La Bodeguita De Mima on E. Market St, where members of Louisville’s Cuban community are gathering to show support for owner Fernando Martinez. He said he was threatened by BLM protesters, who sent letters to business owners in NuLu demanding to improve diversity in the area. pic.twitter.com/sFJR5c0KNM

The restaurant said it's faced "vandalism" and "extortion" since Martinez spoke out.

"You're attacking a brown black establishment in the name of Black Lives Matter? Wait a minute, something is weird about that," Brewster said.

Luis David Fuentes of El Kentubano, a publication for the Latin community of Kentucky, said members of the local Cuban community have "fallen in love with this city and nation" and are pursuing "the American dream," the Courier-Journal reported.

He said they were forced to "escape the socialist government that took away our grandparents' private businesses in 1959 and continue to restrict our civil and political rights today."

Many, Fuentes said, risked their lives to pursue "freedom, respect and prosperity." Those values now are under attack "because of the diffusion and expansion of Marxist ideas."

Two of BLM's three founders describe themselves as "trained Marxists." On it's website, Black Lives Matter DC declares it is dedicated to "creating the conditions for Black Liberation through the abolition of systems and institutions of white supremacy, capitalism, patriarchy and colonialism."