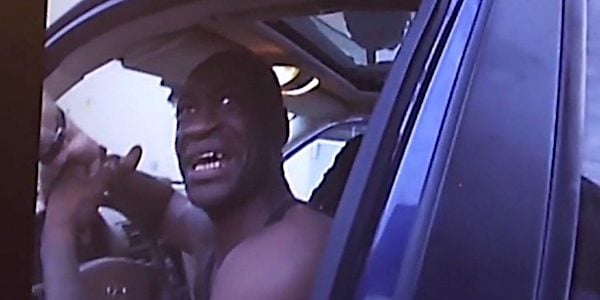 Image from bodycam video of the arrest of George Floyd (Video screenshot DailyMail.com)

Both the prosecutors and the defenders of four Minneapolis police officers charged with murder in the case of George Floyd undoubtedly will present segments of the disturbing, leaked bodycam footage published by DailyMail.com to make their case.

The video shows rookie officer Thomas Lane approaching Floyd's SUV on May 25 and knocking on the driver's window. Lane ordered Floyd to show his hands, and when Floyd didn't comply, the officer drew his weapon.

Floyd, clearly terrified and acting erratically, pleaded with officers that he's a "good man" and resisted their efforts to put him in their vehicle after his arrest for passing a counterfeit bill.

Floyd apparently was suffering respiratory distress and repeatedly told the officers he was claustrophobic.

The officers' defense team will note the sequence of events: Floyd pleaded that he could not breathe as he was resisting the officers' efforts to put him in the vehicle.

And it was Floyd who demanded that he be put on the ground.

Prosecutors will emphasize that officer Derek Chauvin, 44, who is charged with murder, pressed his knee to Floyd's neck for nearly 8 minutes. Officers Lane, Alexander Kueng and Tou Thao are charged as accessories.

The autopsy report from Hennepin County Medical Examiner's Office found Floyd had fentanyl and methamphetamine in his system at the time of his death. The cause of death was determined to be "cardiopulmonary arrest complicating law enforcement subdual, restraint, and neck compression."

The transcript from the body camera worn by officer Kueng already has been published by the Minneapolis Star Tribune.

HillReporter.com emphasized the footage shows Lane "holding a gun in Floyd’s face and giving multiple contradicting orders about what to do with his hands, while Floyd, who appears confused, begs the officer not to shoot him."

A longer video, apparently from Keung’s body cam, includes the footage of Floyd lying on the ground.

HillReporter.com said the leaked footage appears to have been recorded surreptitiously from a screen by a cellphone, noting the judge in the case had ruled that the video could only be viewed in the courthouse and not released.