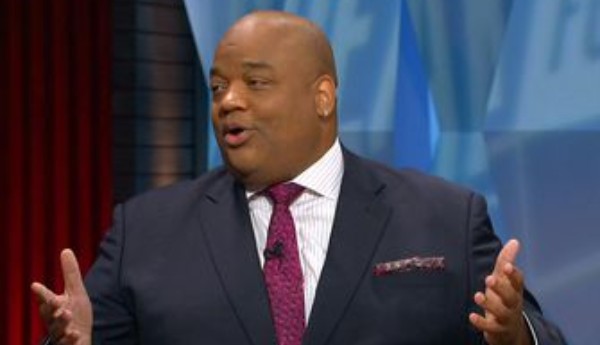 Through their message that "the system is rigged" and police are out to get you, the Democratic Party is using fear to "control" African-Americans, charges sportswriter and commentator Jason Whitlock.

After spelling out the serious consequences in an interview Tuesday with "Tucker Carlson Tonight," Whitlock called the Democrats' racial politics "pure evil – it's borderline satanic."

"For those of us that have religious faith, we understand that fear is the friend of evil," Whitlock said. "And the reason you embrace faith is so that you can operate without fear and you can reach your highest potential. This is just an irrational fear."

Whitlock said Michelle Obama's reference in her Democratic National Convention speech to fear in the black community of being killed by police is not supported by facts.

"What black communities have they actually lived in?" Whitlock asked, referring to the Obamas.

"That is not the fear that is pervasive throughout black communities, fear of being stopped by the police and killed. The stats, the facts, the evidence don't back up this irrational fear," said Whitlock, a sportswriter for Outkick the Coverage and a former columnist at the Kansas City Star, AOL Sports and Foxsports.com.

Instilling irrational fear, he said, will only lead to more panic and "bad decisions."

"Why is someone trying to instill that fear in us of the police? It's like a self-fulfilling prophecy," he said. "If you engage with the police filled with fear, you are more likely to make really bad decisions that then provoke them to take action."

He said the Democrats' message that the system is "rigged" removes hope and gives people an excuse not to even try to be successful.

Whitlock noted he was raised by parents who lived through the Civil Rights Era. The hope they instilled in him and his siblings was that they could "go out and conquer the world."

Whitlock said the Democrats' message to blacks and the fear-based control is "pure evil - it's borderline satanic."

"If you really have an understanding of religious faith, the principles taught in the Bible, why Jesus died on the cross for us. If God's on your side, how can you fail?" he said.

"It's sickening to me, this message, and to see a major political party pump this message into the black community is really disheartening to me."