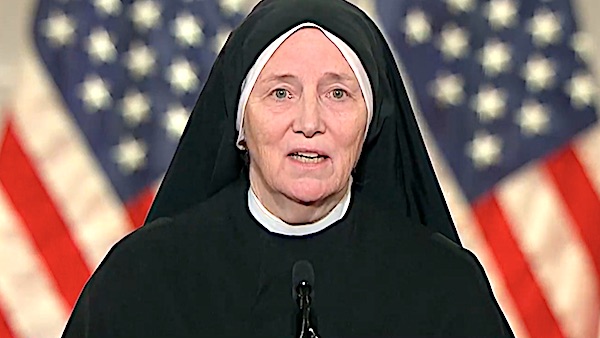 The Washington Post and New York Times have been busy "fact-checking" statements about Joe Biden's record on abortion at the Republican National Convention, and last night the Post targeted a Catholic nun, Sister Deirdre Byrne.

The Post objected, insisting "Biden does not support 'late-term abortion and infanticide.'"

"He supports abortion rights and says he would codify in statute the Supreme Court's landmark ruling in Roe v. Wade and related precedents, which generally limit abortions to the first 20 to 24 weeks of gestation," the paper said.

But Harsanyi argued that none of the above conflicts with Byrne's contention.

It's clear, he said, that Biden "supports the right of unlimited abortion, funded by the taxpayers, up until the moment of birth."

Harsanyi pointed out that the words "generally limit" are vague and do "a lot of heavy lifting."

The Post noted that only 1% of abortions "happen after the fetus reaches the point of viability."

But the paper avoided saying, argued Harsanyi, that more than 8,000 viable fetuses, and probably more than 10,000 very close to viability, are aborted every year.

"The killing of thousands of tiny human beings — whether it is 'codified' by law; or whether it is allowed by emotional health exemptions; or whether reporters find 'experts' to tell us it's okay — is properly described as infanticide," he argued.

Harsanyi reasoned it would be preposterous for a Post factchecker to dismiss gun deaths as "generally" unimportant because less than .01 percent of legal firearm owners commit murder.

Just as it would be absurd, he said, for a public official who advocates for zero limits on gun ownership to contend he was simply promising to "codify" the Second Amendment.

"To do so would be to circumvent fundamental point of the debate — which is exactly what pro-choice reporters are trying to do," he said.

Whenever Democrats are asked what restrictions they believe should exist, they claim the decision regarding whether or not to dispense with a human life is between the woman and her physician.

Harsanyi also noted Biden recently dropped his 45-year of support for the Hyde amendment, which forbids state-funding of abortions.

Earlier this month, pro-life groups condemned Biden and Harris as "the most pro-abortion ticket in history."

The Women Speak Out PAC, the campaign arm of the Susan B. Anthony List, released an ad in seven battleground states blasting the candidates as "pro-abortion fanatics."

"Kamala Harris joins Joe Biden on the most pro-abortion ticket in history," said the political action committee in a statement. "Their agenda: a pro-abortion Supreme Court, abortion-on-demand up to birth, paid for by American taxpayers, and no protections for infants born alive after failed abortions."