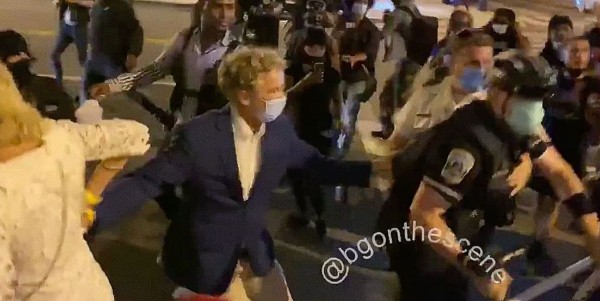 If not for the police, Sen. Rand Paul says he and his wife might have been killed last night in an attack by a violent mob of as many as 120 on a Washington, D.C., street as they left the White House after President Trump's nomination speech.

"I truly believe this with every fiber of my being, had they gotten at us they would have gotten us to the ground," he said in an interview Friday morning with "Fox & Friends."

The Kentucky senator said the incident was "horrific," with a growing mob "shouting threats to us, to kill us, to hurt us, but also threats ... shouting 'say her name,' Breonna Taylor."

It was impossible to reason with them he said, because he happens to be the author of the law to end no-knock raids that bears the name of Breonna Taylor, the 26-year-old African American who was fatally shot by police in Louisville, Kentucky, in March.

"The irony is lost on these idiots that they're trying to kill the person who's actually trying to get rid of no-knock raids," he said.

Yet the demonstrators were still yelling: "We're not going to let you go alive unless you'll say you're for criminal justice reform."

The attack on Paul and his wife was among many incidents captured on video of vicious verbal and sometimes physical attacks on attendees of the event Thursday night on the South Lawn of the White House.

Among the targets was Georgia State Rep. Vernon Jones, a Democrat who spoke this week at the RNC.

He was showered with obscenities, and like Paul, the mob demanded he say the name of Breonna Taylor.

"Are you a black Trump supporter?" one asked.

On Monday, Jones told the RNC the Democratic Party "has become infected with a pandemic of intolerance, bigotry, socialism, anti-law enforcement bias, and a dangerous tolerance for people who attack others, destroy their property and terrorize our own communities."

See video of the attack on Vernon Jones:

Police escorted several guests and delegates from GOP convention to their hotels, including Georgia state Sen. Vernon Jones, as protesters heckled them in the street. Jones, a Democrat, spoke on President Trump’s behalf. #Dcprotests pic.twitter.com/F9GNBep6KO

Paul said the mob pushed a police officer backwards to get to him. The senator said he caught the back of the officer's flak jacket to stabilize him "to make sure he's OK because he's our defense."

See video of the assault on Sen. Rand Paul:

Rand Paul just got chased by a crowd back to his hotel, after leaving the White House from Trump’s Republican Party Nomination #DC #DCProtests pic.twitter.com/h1kPcZG1jh

Paul said he believes the people involved in the attack were paid to come there and wreak havoc. He wants the FBI to investigate "interstate criminal traffic being paid for across state lines," because people have already been killed in other cities.

"This is disturbing because, really, if you're inciting a riot that's a crime, but if you're paying someone to incite a riot that person needs to go to jail as well," he told "Fox & Friends."

"They were inciting a riot and they would have killed us had the police not been there," he said.

Paul said the mob represents "the new Democrat party," the voters of the ticket of Joe Biden and Kamala Harris.

"All of these failed cities Democrats have run, the president said in his speech," Paul said. "If we allow them to take over the White House, we are going to become Portland, the country will be on fire, we have to have law and order and we have to support the police. I can't say that strong enough."

There were many other attacks on attendees of the White House event that were captured on video.

Couple wearing Trump T-shirts attacked on their way to the fireworks display:

Couple viciously harassed on the way to their car:

Man and his wife leaving White House get mobbed on their way back to their hotel by livid protesters. pic.twitter.com/qnpPTfReS3

RNC attendees spit on as they entered their hotel:

These were attendees of the RNC being spit on as they entered their hotel. pic.twitter.com/XH0eiZf9Y1

Told these BLM terrorists to watch my show today after they followed us for over a mile threatening my wife and I and calling her a “bitch-ass.” I promised I’d make them famous. Don’t miss the show for a full explanation of how ugly it really was. pic.twitter.com/dxkuPWVwwb

Brandon Straka, founder of the #WalkAway movement of former Democrats, was harrassed on the way to his hotel:

I haven’t endured an anti-gay attack like this in probably 10 years. #BlackLivesMatter activists physically assault me & Mike Harlow on our way into our hotel, calling us faggots & threatening us. The one girl comes back & knocks my friend’s phone out of her hand.#BLM= violence pic.twitter.com/Cmhc4g57tU