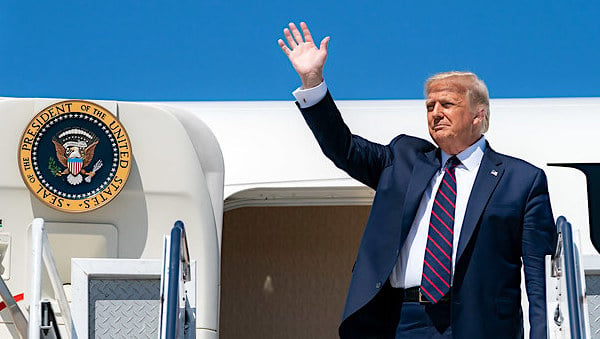 If you want a barometer for where we are as a country, consider this: Rioters can topple statues of George Washington or Thomas Jefferson and odds are good local police will be ordered to stand down. Remove a neighborhood mailbox for ordinary reasons, and well, that’s such a potent symbol of supposed U.S. government tyranny that House Speaker Nancy Pelosi will convene hearings about the “the sabotage of the Postal Service" and members of Congress will openly suggest arresting the postmaster general.

As usual, the current hysteria all started because Donald Trump Said Something. In an interview on Fox Business last Thursday, the president said he opposed $25 billion in emergency funding for the U.S. Postal Service. “They need that money in order to make the post office work, so it can take all of these millions and millions of ballots,” Trump said.

The president has long maintained without much evidence that mail-in voting is easily susceptible to fraud, notwithstanding the fact that he’s voted by mail. Whether he meant his comment as some kind of threat, didn’t know what he was talking about, or was just idly bloviating is hard to parse. Later that day he told reporters if Democrats agree to a deal on coronavirus funding, “the money they need for the mail-in ballots would be taken care of. If we agree to it. That doesn’t mean we’re going to agree to it.”

At least one journalist, liberal columnist Bill Scher, urged his colleagues to pump the brakes in response to Trump’s seemingly inflammatory statements. “We should be very precise with our language on this subject. Trump is saying here he opposes extra money in any stimulus bill to aid mail voting since he doesn't want universal mail voting,” Scher pointed out. “He is NOT copping to purposefully slowing mail delivery to prevent ballots from counting.”

Last year, the post office delivered 471 million pieces of mail on an average day. Even if every one of the America’s 153 million registered voters cast their ballots by mail, the Postal Service wouldn’t miss a beat. Yet, the media, pundit class, and the highest levels of the Democratic Party responded to Trump by embracing a full-blown conspiracy theory about how he was deliberately sabotaging the post office.

“I wonder if you're outside trying to hold down your mailboxes. They’re going around literally with tractor-trailers picking up mailboxes,” Joe Biden said Friday. “You oughta go online and check out what they're doing in Oregon. I mean, it's bizarre!”

A grand total of 30 mailboxes have been removed in Portland and Eugene, Ore., in places where the post office says there were multiple mailboxes. The volume of mail has been declining for decades, and the USPS has been acting accordingly. In 2016, while Joe Biden was vice president, the agency announced it had removed 14,000 mailboxes around the country in the previous five years.

Since removing thousands of mailboxes happened on Biden’s watch, by his logic the Obama administration was trying to impede elections.  As a conspiracy, that makes about as much sense as implying that Trump personally ordered the removal of 30 mailboxes in a state he lost by 11 percentage points in 2016 – a state, incidentally, in which every vote has been cast by mail for decades.

If Trump had uttered a statement that nutty, it would be greeted by a chorus of eye-rolling, newspaper fact checks, and an online onslaught of hysteria. Because it was the Democrats’ nominee, on Friday the post office announced it is suspending the planned removal of superfluous mailboxes in 18 states, even though there’s zero reason to believe it would impact the election.

The mailbox conspiracy has been augmented by another. The post office has also gotten rid of some of its big, expensive mail-sorting machines. This can only mean one thing. “We know Trump is trying to destroy USPS by having [Postmaster General Louis] DeJoy remove sorting machines, cut back hours and increase the cost of stamps for mail in ballots,” tweeted MSNBC contributor and journalism professor Jason Johnson.

We know this? Since when? Johnson’s Chicken Little imitation represents the convergence of two conspiracy theories: One is that mail-sorting machines, like mailboxes, are being removed to help Trump in November; the other is that DeJoy, a GOP fundraiser, is Trump’s puppet.

On the first point, Johnson simply has no idea what he’s talking about. Yes, it’s true that the post office has apparently removed or had plans to soon remove 19 mail sorting facilities from five processing facilities. The USPS has further plans to remove 502 additional machines out of nearly 5,000 currently in operation.

However, Vice obtained a document showing “these changes were in the works before Louis DeJoy, a top Trump donor and Republican fundraiser, became postmaster general.” Again, removing mail sorting machines is hardly unprecedented. In 2000 USPS processed 103 billion pieces of first-class mail. By 2017, that figure was down to 54 billion. Aside from an uptick in package delivery, the overall volume of mail the post office is delivering is projected to decline well into the future.

The fact that a presidential appointee is a political donor is hardly unprecedented. Nor is it evidence that he’s up to no good. DeJoy spent over 30 years as a top-level executive at logistics companies, so he seems more than qualified for the job. Evidence suggests he’s making necessary changes at an agency that needs to adapt to a world where email and private delivery services aren’t going away. Further, though coronavirus has presented unique challenges, the post office is supposed to raise its own revenue.

Trump’s problematic comments are what they are, but what really lies behind the sudden emergence of millions of online Postal Justice Warriors raging at Trump is a deeper anxiety. The left, which prides itself on pushing for expanded ballot access, is choosing to believe there’s a conspiracy afoot rather than acknowledge the push to rapidly expand mail-in balloting has resulted in disastrous problems.

One in five ballots were initially rejected in New York’s recent mail-in congressional elections and it took two months of counting votes to declare a winner. In 31 municipal elections New Jersey held in June, done entirely by mail, nearly 10% of all ballots were rejected – and four people were indicted for fraud, including an elected official in the state’s third largest city. (The Washington Post ran an almost comical article pretending this fraud in New Jersey was no big deal.) In June, Clark County, Nev., saw 223,000 mail-in ballots returned as undeliverable – only 305,000 total votes were cast in the election. These kinds of problems portend disastrous things for counting the vote in November.

In 2016 it was Russia, and now in 2020 it’s the post office. Partisan, media-fueled conspiracies designed to delegitimize the results can’t be a feature of every election. Unfortunately, the theatrics of the upcoming congressional hearings over the U.S. Postal Service are sure to provoke even more sensational media coverage at a time when we most need a voice of reason.