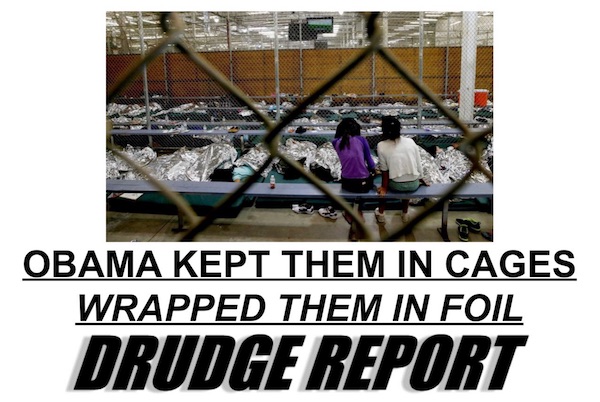 Michelle Obama received high marks even from the right for delivering an effective keynote address Monday night to open the Democratic National Convention, but even the Associated Press fact-checker took issue with some of her content.

"They watch in horror as children are torn from their families and thrown into cages," the former first lady declared, blaming President Trump for the policy of temporarily separating children from parents who face charges of entering the country illegally by placing them in indoor facilities where they are protected by chainlink fences.

The AP reminded readers that it was under her husband's administration that the "cages" were built.

"Michelle Obama assailed President Donald Trump on Monday for ripping migrant children from their parents and throwing them into cages, picking up on a frequent and distorted point made widely by Democrats," the fact-checker said.

"She’s right that Trump’s now-suspended policy at the U.S.-Mexico border separated thousands of children from their families in ways that had not been done before. But what she did not say is that the very same 'cages' were built and used in her husband’s administration, for the same purpose of holding migrant kids temporarily."

The AP pointed out the "cages" were "chain-link enclosures inside border facilities where migrants were temporarily housed, separated by sex and age."

"At the height of the controversy over Trump's zero-tolerance policy at the border, photos that circulated online of children in the enclosures generated great anger," the AP said. "But those photos – by the Associated Press – were taken in 2014 and depicted some of the thousands of unaccompanied children held by President Barack Obama."

The fact-checker noted that "prominent Democrats" to this day "have continued to cite cages for children as a distinctive cruelty of Trump."

Is Michelle Obama trying to hide the fact it was her husband Barack who started putting children in 'cages'?
98% (191 Votes)
2% (4 Votes)

House Democrats are promoting their "civil rights" hearing on "kids in cages" and "inhumane treatment" with a photo from 2014, when Joe Biden was Vice President. So dishonest! pic.twitter.com/Exuj1eudrr

At the time, in an effort to promote a hearing on Trump's policies of "putting migrant kids in cages," House Democrats tweeted a photo of children at a detention center behind a chainlink fence.

The problem was that the photograph, intended to scold Trump for "inhumane treatment at the border," was from the Obama era.

Staffers with the House Reform and Oversight Committee, apparently discovering too late what many Americans already knew, deleted the tweet with the 2014 photo.

Trump's campaign team reacted to the tweet, pointing out Joe Biden was vice president at the time of the photo.

"House Democrats are promoting their 'civil rights' hearing on 'kids in cages' and 'inhumane treatment' with a photo from 2014, when Joe Biden was Vice President," the Trump campaign account wrote on Twitter. "So dishonest!"

House Oversight Republicans asked via Twitter: "You all know that's a picture from 2014, right? Remind us who was President then."