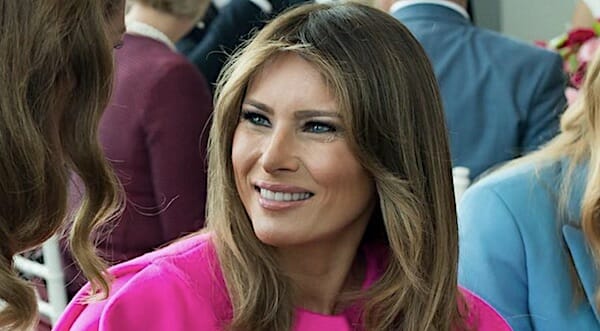 It seems that today someone can be the target of Hollywood's leftists or the media for the most innocuous things.

Just ask Nick Sandmann, who told his story at the Republican National Convention of being defamed by media for being confronted by a Native American activist while wearing a Trump MAGA hat.

And now first lady Melania Trump has been put in the bull's-eye after telling America in her RNC speech Tuesday night that her husband won't quit until he helps everyone affected by COVID-19, expressing gratitude to first responders, nurses and doctors, and sharing her "deepest sympathy" with the victims and their families.

Not surprisingly, she said: "I'm here because we need my husband to be our president and commander in chief for four more years. He is what is best for our country."

Which was too much for entertainer Bette Midler.

#beBest is back! A UGE bore! She can speak several words in a few languages. Get that illegal alien off the stage!

Midler neglected to acknowledge that the first lady not only speaks English, albeit with an accent, she also speaks Slovenian, French, Italian and German.

The report noted Trump was born and raised in Yugoslavia before coming to the U.S., and she "implored Americans to reelect him."

Who knew xenophobia was the wind beneath your wings! https://t.co/wh1UMJd5Og

Not only does she speak English, but 4 other languages as well. Jealousy is an ugly emotion isn't it?

One Twitter user wrote, "Who knew xenophobia was the wind beneath your wings?"

Other comments were "jealousy is an ugly emotion" and "Oh, God. Bette Midler's a racist."

The Gateway Pundit commented, "Bette Midler is losing it."

One Twitter user posted a cartoon image that included Midler's face and the words, "Old woman yells at social media."

Actor James Woods said, "The party of diversity mocks an American for her accent."

The New York Post said Midler's attack was "below the belt" and "unhinged."