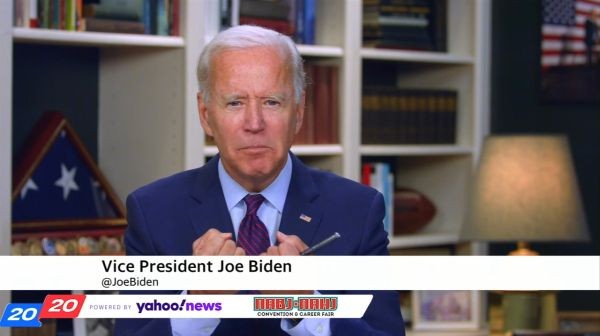 After insisting that any black person who doesn't vote Democratic isn't black, Joe Biden has now made it clear he believes the African-American community lacks diversity of thought.

"What you all know, but most people don't know, unlike the African American community, with notable exceptions, the Latino community is an incredibly diverse community with incredibly different attitudes about different things," Biden said in an interview with Yahoo News.

He had been asked whether or not he will "reengage" with Cuba and how he will address the issues that matter to the nation's Latino community.

In May, Biden declared to a black interviewer "you ain't black" if you don't vote for him.

"If you have a problem figuring out whether you're for me or Trump, then you ain't black," he said in an interview on the "The Breakfast Club," a nationally syndicated radio show based in New York City.

The interviewer, Charlamagne Tha God, responded to Biden: "It don't have nothing to do with Trump, it has to do with the fact — I want something for my community."

Republican Sen. Tim Scott of South Carolina, an African-American, noted at the time on Twitter that 1.3 million black Americans already have voted for Trump.

"This morning, Joe Biden told every single one of us we 'ain't black," he wrote. "I'd say I'm surprised, but it's sadly par for the course for Democrats to take the black community for granted and brow beat those that don't agree."

Black Voices for Trump, an extension of the president's reelection campaign, called Biden's remark in May "racist and dehumanizing."

Trump adviser Katrina Pierson said in a statement at the time: "White liberal elitists have continuously dictated which Black Americans are allowed to come to the table and have a voice. It is clear now more than ever, following these racist and dehumanizing remarks, that Joe Biden believes Black men and women are incapable of being independent or free thinking."

Pierson said Biden "truly believes that he, a 77-year-old white man, should dictate how Black people should behave."

While about 90% of black voters typically support the Democratic nominee in presidential elections, the Trump campaign has drawn the support of some prominent black personalities, particularly with economic policies that reduced black unemployment to the lowest levels in 50 years before the coronavirus pandemic.

Several polls have showed Trump with an approval rating of more than 30% among black voters.

McClatchy noted "young men of color" are a "potential problem for Democrats" in the 2020 election.

"Male African American and Latino voters — particularly those under the age of 35 — are showing a surprising openness to President Donald Trump’s re-election bid, according to interviews with leading Democratic and Republican strategists and a review of polling data," the report said.

"Driven by a once-strong economy and a greater acceptance of the president’s behavior, their interest is significant enough to alarm Democrats that the overwhelming support they traditionally count on from this group could be diminished in November, with potentially serious consequences in a tight election."

It continued: "Critically, many Democrats who have done research on this voter group say the concern runs deeper than young minorities simply not turning out in the upcoming election — an issue that plagued Hillary Clinton in 2016 — but casting their ballots for Trump."