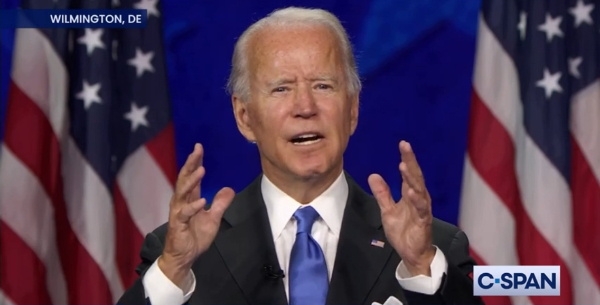 In his acceptance speech Thursday night calling for "unity" and "light," Joe Biden once again repeated the false claim that President Trump referred to neo-Nazis in Charlottesville as "very fine people," saying it prompted him to run for the Democratic presidential nomination.

"My father taught us that silence was complicity. And I could not remain silent or complicit. At the time, I said we were in a battle for the soul of this nation," said the former vice president, who served 36 years in the Senate.

Noting the third anniversary of the clash over a statue of Robert E. Lee, Biden recalled the "neo-Nazis and Klansmen and white supremacists coming out of the fields with lighted torches," their "veins bulging," "spewing the same anti-Semitic bile heard across Europe in the '30s."

"Remember the violent clash that ensued between those spreading hate and those with the courage to stand against it?" Biden asked. "Remember what the president said? There were quote, 'very fine people on both sides.'"

Biden, for his part, weighed in on the controversial Confederate flag issue in a 1993 Senate session declaring that "many fine people" display it.

In March 2019, CNN contributor Steven Cortes chastised his colleagues for continuing to promote "the Charlottesville lie."

In a RealClearPolitics column, he cited CNN's correct contemporaneous reporting and the transcripts of the Trump Tower presser after the deadly protest.

Cortes noted that after another question by a reporter, Trump became even more explicit.

"I'm not talking about the neo-Nazis and white nationalists, because they should be condemned totally," the president said.

Yet, the "falsehood" persists, Cortes wrote, pointing to CNN contributor Keith Boykin stating the previous week: "When violent people were marching with tiki torches in Charlottesville, the president said they were 'very fine people.'"

"No, they didn’t even try to use that defense," the CNN anchor said. "It's a good one, but no one's even tried to use it, so you just used it now."

Her NBC colleague Chuck Todd claimed Trump "gave me the wrong kind of chills. Honestly, I’m a bit shaken from what I just heard."

Mulvaney responded that the president has done so several times, including after the death of Charlottesville victim Heather Heyer.

"Racism is evil," Trump said, "and those who cause violence in its name are criminals and thugs, including the KKK, neo-Nazis, white supremacists, and other hate groups that are repugnant to everything we hold dear as Americans."

Cortes said "the only explanation for such a repeated falsehood is abject laziness or willful deception."

Expressing fear that the progress of the Civil Rights Movement was unraveling, at least in part due to President Trump, Biden referenced the 2017 Unite the Right rally in Charlottesville.

"What I realized is that hate just hides," Biden told the congregation at Bethlehem Baptist Church in Columbia, South Carolina, in reference to his false rendering of Trump's remark.

"And it when it comes out from under the rocks, when it gets a little bit of oxygen."

"This president and his – the Ku Klux Klans and the rest of them, they think they’ve beaten us again but they have no idea. We're just coming back."