This article is a little longer, but the contents and the embedded podcasts can change your life! It's the story of my dear friend Dr. Ming Wang, featured in the film "God's Not Dead." His incredible journey out of hopelessness and darkness in Communist China is the focus of a major inspirational movie, "Sight," set for national release in 2021.

Like Oprah Winfrey, Dr. Ben Carson, Tyler Perry and scores of minorities who started with relatively little and faced incredible adversity yet through hard work and perseverance succeeded, Ming's life testifies to what happens when people reject an oft-repeated narrative that America is "racist" and holds minorities back.

The elements adversely influencing so many today include: anger and pessimism; fear, suspicion and ingratitude; victimhood and dependency on government. These are hammered home incessantly, and they stifle initiative and squash people's dreams and potential for achievement.

Listen to four brief podcasts to hear up close and personal from Dr. Ming Wang. Share this with your family and friends to motivate them plus rescue them from manipulation misleading multitudes, especially millennials and minorities today.

As a boy Ming grew up in poverty 7,500 miles away in atheist, Communist China amidst Mao's Cultural Revolution, which killed millions in the quest for a Marxist/socialist "progressive" utopian society.

Schools were closed as 20 million students were deported to "reeducation" labor camps to indoctrinate youth in the "Marxist/leftist revolution." Dissenters were slaughtered in mass, and Ming's mother was beaten and sent away for years after struggling with her husband and family to live on $15 a month as the country embraced policies of "income equality."

Listen to God's providential plan that finally enabled Ming Wang to escape and land in America with $50 in his pocket and an American dictionary in his hand. From communist dictatorship to capitalistic enablement, he applied himself, worked diligently and persevered even when someone told him he couldn't make it as a minority.

Be inspired in lifestyle evangelism as you hear how Ming was converted from atheism to Christianity and then became a world changer impacting people across America and abroad by his transformation.

Ming founded the Wang Vision Institute in Nashville, Tennessee, and is known the world over for his scientific breakthroughs. He's called "the doctor's doctor" because more than 4,000 physicians have trusted him for their care, and I personally am indebted to him for serving me when I lost the sight in in my left eye a decade ago.

Instead of criticizing flaws in our nation's history and those still being addressed today, Ming stands up for America and seizes opportunities to speak to students while he works to develop networks assisting minorities in fulfilling their destinies. Over a decade ago, he cofounded the Tennessee Immigration and Minority Business Group to promote minority businesses and provide free business consultation. I had the privilege of being with him when he was honored as Nashville's "Citizen of the Year" not long ago (see photo below). 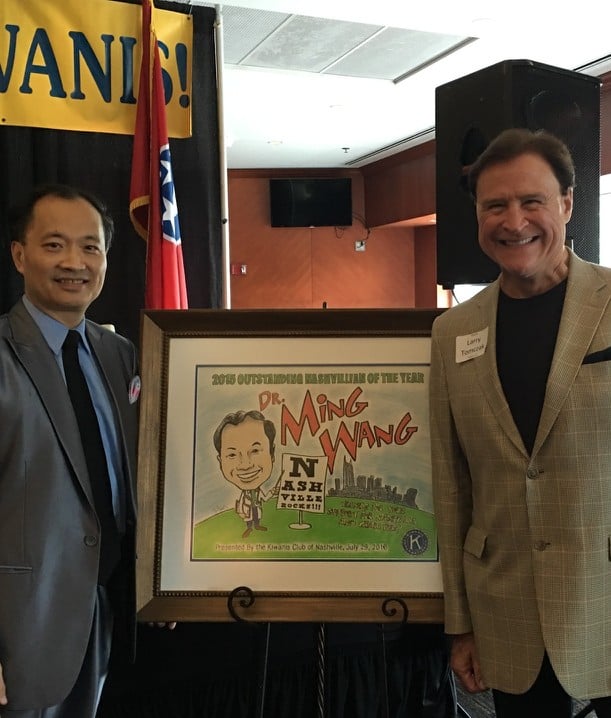 My own journey is one in which I made a quality decision early on, in spite of difficult circumstances, to resist tendencies to compare and envy people's possessions and personal success. Like Ming, I realized early on I needed to take responsibility for my own life and not succumb to resentment, bitterness and self-pity, which paralyze people from pressing forward to fulfill their destiny. From my experience I later launched a ministry called "People of Destiny" with an inspirational phrase, "Fulfilling Your Destiny is a Matter of Choice not Chance." One of our uplifting songs was "I Have a Destiny," which tens of thousands sang across America.

Here's my story: My father was an immigrant from Poland at a time when "Polack" jokes were the rage, and I was the butt end of people's put downs. He was a custodian, never finished high school and I often experienced his frustration and anger. My mother was disabled and scrubbed floors on her knees three days a week. We had no car (extremely embarrassing!) or air conditioning and never went on a vacation.

Our small home was in Cleveland, Ohio (mocked then as the "mistake on the lake"), and anywhere we wanted to go required buses. I daily walked 6 miles back and forth to school for 12 years.

Yet, I didn't feel sorry for myself or blame society but heeded the counsel of my precious mom: "Always do what's right; study, work hard and you'll have it better than us!" As it's been said: "Limited means does not mean limited dreams."

I embraced the principle of "delayed gratification," cultivated self-discipline and refused to compromise like some friends who drifted into rebellion, drugs and immorality. I grieved as my best friend died in his early 20s following pop-cultural personalities and propaganda. The same deceptions have only intensified today with prophets of prejudice exploiting racial tension to foster discontentment, division and use of violence while making outrageous demands for "social justice."

I share this not to impress but inspire multitudes to renounce excuses of "white privilege" and "systemic racism" as reasons people don't succeed in America, especially if they are people of color. I agree in some cases that minorities can have more of a challenge than whites, but opportunities for advancement are plentiful if you're willing to pay the price. Scores of universities and corporations are literally looking for educated, professional black men and women with character and credentials to hire and place in lucrative positions.

In his book, "How Do You Kill 11 Million People," Andy Andrews documented how Hitler deceived a nation and exterminated "undesirables," by simply repeating a lie to dupe the masses. People suffer enormous consequences when they lack discernment and are persuaded by leaders who oftentimes live comfortable lives themselves as "educated elite" and "privileged politicians."

Jesus exposed these hypocrites in His day saying, "… do not do their works. For they speak but do nothing [to really help you]. … He who is greatest among you shall be your servant. For he who exalts himself will be humbled, and he who humbles himself will be exalted" (Matthew 23:3; 11-12).

The Marxist-led Black Lives Matter organization (not the slogan, which is noble) propagates a lie of America as a racist nation that must be replaced along with the traditional family because "institutional racism" and "white privilege" are rampant and prevent minorities from advancing. "Tear down the system" is their theme.

At the recent Democratic convention, former President Barack Obama hammered home the theme that America is unfair for everyone but the "whites." Wall Street Journal Columnist Peggy Noonan wrote an article afterward lamenting how young people hearing his angry speech would surely ask, "Why would anyone fight to save this place? Who needs it?" (WSJ 8/20/20).

Obama said, "Irish and Italians and Asians and Latinos told: go back where you came from. Jews and Catholics and Muslims and Sikhs made to feel suspect. … Black Americans chained and whipped and hanged. Spit on for trying to sit at lunch counters, beaten for trying to vote. … They knew how far the daily reality of America strayed from the myth."

It's puzzling to hear Barack Obama speak about "white privilege" as an African American, yet he was elected president by the support of over 100 million white Americans in his two presidential elections. His college and law school costs were covered. Now as a private citizen his net worth is $40 million; he has a $200,000 pension for life; the Obamas' books, Netflix contract and speaking will translate to a post-presidency take of $240 million as they enjoy two lavish residences in D.C. and a $12 million waterfront mansion in Martha's Vineyard!

The seduction of socialism being put forth by certain politicians today flies in the face of what made America the beacon of hope, freedom and prosperity for the entire world. Individuals took advantage of liberty and opportunity that bring blessing when people apply themselves. We make provision to provide people a hand up rather than a handout when there is genuine need, but we must be discerning to not be taken in by lazy people gaming the system to live off the labors of others.

Many people are told today that the reason they are not prosperous but languishing is due to "income inequality" stemming from "systemic racism" and "white supremacy." "Social justice demands that we eliminate our capitalistic, free market system and embrace the socialist/Marxist model where we 'share the wealth' and enjoy 'free' education, health care, child care and a basic guaranteed income through government controlled distribution of wealth."

Socialism is the first step to communism, which has taken the toll of hundreds of millions of lives through genocide, starvation and deportation, a brutal reality Dr. Ming Wang experienced firsthand.

Here's the deal: Amidst shrill voices of political rabble-rousers and "social justice warriors" seeking to tear down our American system because of so-called "systemic racism" and "white supremacy," informed influencers like Dr. Ming Wang proclaim the gospel and a biblical worldview. They're exalted because of their servanthood as they inspire people not by declaring how deprived and disadvantaged they are but rather how peaceful and prosperous they can become when applying themselves and aligning with a Biblically informed, historically American path to success.

Larry Tomczak
Larry Tomczak is a cultural commentator of 46 years, Intercessors for America board member, bestselling author and a public policy adviser with Liberty Counsel. His new, innovative video/book, "BULLSEYE," develops informed influencers in 30 days (see www.bullseyechallenge.com), and he has a variety of resources on his website (see www.larrytomczak.com). You can also hear his weekly podcast here.
25 woes plaguing America: Is there hope?
Does vax/mask argument apply to Americans in the womb?
4 scriptural secrets for financial success in today's turmoil
Is there a demonic element to the delta variant?
Biden: Not just diminished, but dangerous. He must resign
See more...