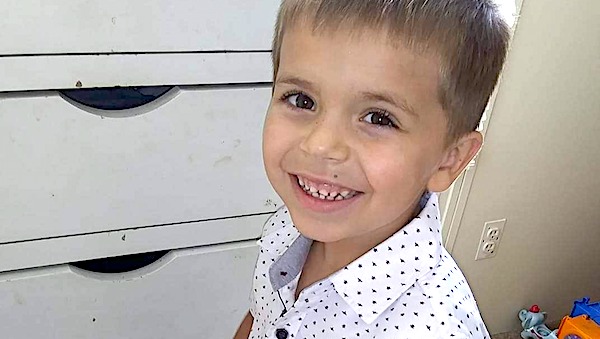 A Wilson, North Carolina man was arrested Tuesday after he allegedly approached a 5-year-old who was playing outside and shot the child in the head.

Darius Sessoms, 25, was apprehended and charged with first degree murder in connection with his alleged role in ending the life of the toddler, according to WRAL. The 25-year-old ran up to Cannon Hinnant, 5, and shot him in the head in front of his two sisters, aged 8 and 9, while they played outside of their home, witnesses told the local outlet.

“My first reaction was he’s playing with the kids,” Doris Lybrand, who watched the shooting, told WRAL. “For a second, I thought, ‘That couldn’t happen.’ People don’t run across the street and kill kids.”

The 5-year-old was pronounced dead at a local hospital, according to the outlet. Sessoms is reportedly Cannon’s neighbor and residents claim the accused man had dinner with the boy’s father on Saturday and was seen at the family home on Sunday, WRAL reported.

5-year-old Cannon Hinnant was killed in a shooting at a mobile home park yesterday in Wilson, North Carolina.

Police have yet to release a motive for the alleged killing, but insist the murder was not random, according to WRAL.

Christina Prezioso, who said she is Cannon’s cousin, has organized a GoFundMe page that has amassed over $5,500 at the time of publishing. Prezioso alleges the toddler was shot after he rode his bicycle into Sessoms’ yard.

“I am the cousin of Austin Hinnant, father of Cannon,” Prezioso wrote in the post. “Sunday, August 9, 2020 a sweet soul named Cannon Hinnant was taken from this world over a senseless act. A beautiful 5 year old baby boy riding his bicycle was shot by his neighbor point blank in Wilson NC.”

We need justice for 5-year-old Cannon Hinnant who was murdered in cold blood.
https://t.co/I8DNOPAgVb pic.twitter.com/eA0AIGGn26

“One minute he is enjoying his life, the next it all ends because he rode into his neighbors yard.. 5 years old guys!! Nothing prepares a parent for the loss of their child. No child should ever have their future stolen from them,” Prezioso wrote.

Sessoms is being held without bond.