For those who saw the advances in national policy, prevailing attitudes and the level of hope among Americans that came out of the Civil Rights Movement despite the collective pain it took to arrive there, it is profoundly sad to witness the ginned-up civil unrest we are currently experiencing, as well as the number of black people – especially young black people – who don't have a clue as to what racism and oppression actually are.

From where a lot of us stand, it's pretty evident that nearly all of our young, black, well-paid professional athletes and entertainers have been completely indoctrinated into far left racialist orthodoxy, as they "take a knee" at events, don "Black Lives Matter" and "I can't breathe" T-shirts and advocate for the wholesale dismantling of our political, economic and social systems.

To be fair, however, we must view their deep ignorance in the context of that to which these people have been exposed. The subversive and substandard public education and other indoctrination to which they've been subjected was by design, and although many young blacks in major urban, Democrat-controlled areas experienced a double-whammy as regards indoctrination, most of what they learned wasn't too different from what their young white counterparts learned.

This is of course why we see so many young people from both ethnic groups who are willing to engage in antisocial behavior and violent demonstrations around the pretext of opposing systemic racism.

Then, we have an entire generation of young people who came of age during the Obama years. Given that administration's dedication to erasing more than five decades of progress in the area of civil rights, it should be no surprise that so many remain ignorant of our history and the progress that was made earlier.

While most non-ideological, non-indoctrinated Americans over 50 can recount seeing more than a few nations wherein citizens were conned by leftist revolutionaries who promised them the moon and then subsequently enslaved them when those leftists came to power, young people today didn't have that advantage. Their teachers thought that Lenin, Stalin, Mao and Castro were righteous dudes; they advanced concepts of social justice and cultivated a deep sense of victimhood amongst their students. These ideas were reinforced by the press and entertainment media – with a large part of the blame falling to the music industry, if we're being honest.

But while we have racist blabbermouths like Shaun King, Jemele Hill and the entire pantheon of prominent black politicos calling for all manner of inane and destructive policy measures, there are now other voices to be heard above the fray. There may still be a significant percentage of black voters who somnambulistically cast votes for the Biden-Harris ticket, but others will not be able to help but notice the spate of pro-Trump, black GOP candidates who have stepped up and the increasing number of blacks who also support President Trump.

Another significant factor to consider: There's simply no denying the substantial benefits that black Americans enjoyed as Trump rehabilitated our economy. And – despite the belief on the part of white liberals that blacks are fundamentally stupid – these people are aware that the setbacks which arose related to the coronavirus pandemic weren't Trump's fault.

Recently, the firebrand North Carolina Bishop Patrick Wooden Sr. was featured in a YouTube video that has since gone viral. In it, he excoriates Democratic vice-presidential nominee Kamala Harris for having supported draconian sentencing policies in California that disproportionally incarcerated black men in order to advance her career. Men like Bishop Wooden are not only increasingly finding their voice – they are being heard. The supportive comments left by black individuals on the video's page are at least as encouraging as Wooden's scorching oratory.

Finally, one doesn't have to look too far afield online to find instances of average black folks expressing their disgust over the fact that the civil unrest we're seeing – ostensibly in support of racial parity – is disproportionately harming them.

I've been saying for years that if the Democratic Party lost the support of black voters, it would be finished as a going political concern in America. Truly, I would not see the imperative for neutralizing the party entirely if it hadn't become lousy with authentic communists. Considering this untenable development, the party may well have outlived its usefulness.

The Democratic Party's cross-hairs have been trained on black families ever since the administration of Franklin Delano Roosevelt when, in order to appease unions and Southern Democrats, entitlements were strategically and insidiously employed in order to deny jobs to black men and enroll blacks into government programs. Democrats under Lyndon Johnson instituted the "Great Society," which supercharged entitlements and led to the multi-generational dependency we see today among many black families.

Thus, I consider it poetic justice that a major push against the status quo of far left racialism and the lock on black votes that Democrats have enjoyed for so long is being driven by black men. 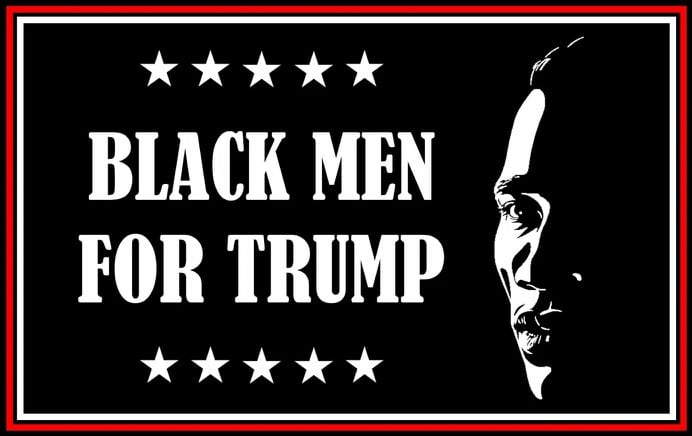 On Friday, Aug. 28, black men across America will launch and lead the Black Men for Trump movement by publicly posting their message – including the graphic above – on their organizational websites, blogs, Facebook, Twitter, Instagram and other media pages. The group plans to go live with videos and interviews, and make a bold public stand for America. Unlike the Black Lives Matter group, this is a grass-roots organization that's comprised of black men who support the president – some conservative, others just fed up – and their supporters.

Black Men for Trump asks for no donations – they just request that supporters help by propagating their message. This new campaign plans to identify and launch new faces they hope will change national politics, and they appear to be very happy with that change being heralded by a white guy named Trump.

In truth, there hasn't been a valid reason why blacks and other ethnic minorities should vote Democrat for many years. In microcosm, the party has been doing to these groups what socialists and communists have been doing to nations – promising the moon and then enslaving them – and it appears that blacks are finally catching on in numbers that could help turn the tide against socialist ascendancy in America.