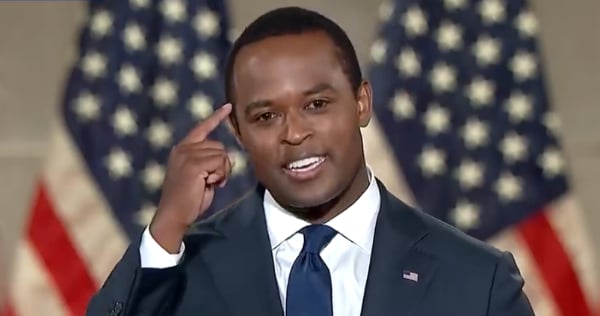 The dynamic black speakers, including non-politicians from many walks of life, featured by the Republican National Convention this past week clearly are a challenge to the Democrats' "lock" on the black vote.

"Uncle Tom" hashtags are trending on Twitter, and a Georgia pastor called the black speakers Trump's "slaves" during a protest Friday at the Lincoln Memorial.

Rev. Jamal Bryant cited Underground Railroad hero Harriet Tubman saying, "I freed thousands of slaves, but I would have freed hundreds more had they known they were slaves."

Bryant, the Washington Examiner reported, said he "thought about that when I saw the slaves on TV this week endorsing Donald Trump."

"I said, 'If only they knew they were slaves, they could have been rendered free.'"

But the nightly roster of black speakers included former Democrats as well as a current Democratic lawmaker. They recounted Trump's accomplishments for the black community, including the lowest unemployment rate ever, the prison and criminal sentence-reforming First Step Act, the "opportunity zones" that incentivize investment in poor areas, permanent funding for historically black colleges and universities, and promoting school choice.

Trump won only 8% of the black vote in 2016, but the latest Zogby poll indicates he has the approval of 36% of black voters and 52% overall, a new high.

Cameron challenged Biden's comments that those who don't support him "ain't black" and that there's no diversity of thought in the black community.

"Mr. Vice President, look at me. I am black," Cameron said. "We are not all the same, sir. I am not in chains. My mind is my own. And you can’t tell me how to vote because of the color of my skin."

Scott said his story proves "a poor black kid from a single-parent household" can achieve anything, even going "from cotton to Congress in one lifetime."

"Our nation's arc always bends back toward fairness. We are not fully where we want to be, but I thank God almighty we are not where we used to be," Scott said.

"We are always striving to be better. When we stumble, and we will, we pick ourselves back up and try again. We don’t give in to cancel culture, or the radical — and factually baseless — belief that things are worse today than in the 1860s or the 1960s."

The "Uncle Tom" epithet is a theme of Larry Elder's new, highly acclaimed documentary "Uncle Tom: An Oral History of the American Black Conservative". The film follows a young, black, Christian contractor, Chad Jackson, who was a long-time Democrat until challenged by a fellow Christian to read the platforms of the Democratic and Republican parties. Jackson was shocked to discover that his support for limited government, low taxes and school choice, and his opposition to abortion on demand made him a Republican. The film documents the blowback Jackson received as he was labeled "Uncle Tom," a "sellout" and a "self-loather."

Former football star Herschel Walker, who has known Trump for 37 years, said the accusations of racism against Trump "hurt my soul."

"I take that as a personal insult, that people would think I’ve had a 37-year friendship with a racist," Walker said. "People don't know what they're talking about. Growing up in the Deep South, I’ve seen racism up close. I know what it is. And it isn’t Donald Trump."

Georgia Democratic State Rep. Vernon Jones said his party has become "infected with a pandemic" of intolerance, bigotry, socialism and an anti-police sentiment.

"The Democratic Party does not want black people to leave the mental plantation they've had us on for decades," he said, noting that when Trump sought the black vote, Democratic leaders "went crazy."

Baltimore congressional candidate Kim Klacik said Democrats "have controlled this part of Baltimore City for 50 years, and they have run this beautiful place right into the ground."

"Abandoned buildings, liquor stores on every corner, drug addicts, guns on the street that’s now the norm in many neighborhoods," she said. "Sadly, the same cycle of decay exists in many of America’s Democrat-run cities."

She said Democrats "still assume that black people will vote for them, no matter how much they let us down and take us for granted."

"We're sick of it. We're not going to take it anymore," Klacik said. "The days of blindly supporting the Democrats are coming to an end."

Former NFL player Jack Brewer accused the media of falsely portraying Trump as a racist while ignoring his contributions to the black community.

"I know what racism looks like, I’ve seen it firsthand," Brewer said. "America, it has no resemblance to President Trump. I'm fed up with the way he's portrayed in the media, who refuse to acknowledge what he’s actually done for the Black community. It’s confusing the minds of our innocent children."

He said Trump represents the America he was fighting for, having "done more for black Americans in four years than Joe Biden has done in 50."

"Joe Biden had the audacity to say if you don't vote for him 'you ain't black.' Well to that, I say, if you do vote for Biden, you don't know history," he said.

Henderson said Trump is "offering real and lasting change ... a country that embraces the spirit of the civil rights movement of the ‘60s, a place where people are judged by the content of their character, their talents and abilities, not by the color of their skin," he said

Jon Ponder, a convicted felon, was pardoned Tuesday night by President Trump, who called his story "a beautiful testament to the power of redemption." The founder of the nonprofit Hope For Prisoners, he appeared with Richard Beasley, the FBI agent who arrested him.

In the convention video, Ponder said Beasley "is now a dear friend."

"My hope for America is that all people regardless of race, color, class or background will take advantage of the fact that we live in a nation of second chances," Ponder said.

He said that during his time in federal prison he found God.

Beasley said of Ponder: "When I met Jon 15 years ago, he was angry, scared, and facing years in prison. On the drive to jail, we had a long talk and began to understand each other. Five years later, when he got out of prison, Jon and I met for lunch. He was a different man."

Former NFL player Burgess Owens, the Republican candidate in Utah's 4th Congressional District race, told the story of his great great grandfather, Silas Burgess, who came to the United States "in the belly of a slave ship" and was sold on an auction block at the age of 8.

"By the grace of God, and the courage of slaves who believed in freedom, Silas escaped through the Underground Railroad and settled in the great state of Texas," Owens said. "He went on to become a successful entrepreneur. He built his community’s first church, first elementary school, and purchased 102 acres of farmland, which he paid off in two years."

Owens was raised in the South during the Jim Crow era but was taught that "anything is possible in America."

"We live in a country where we're encouraged to dream big, where second chances are the core of our DNA," he said. "We don't hear that same message from Nancy Pelosi's Congress. Career politicians, elitists and even a former bartender, want us to believe that's impossible. They want us to believe that what I did, what my great-great grandfather did, is impossible for ordinary Americans. As patriots, we know better."

Ben Carson, the secretary of the housing and urban development, said Democrats who have called Trump a racist "could not be more wrong."

"President Trump does not dabble in identity politics," he said.

"Many on the other side love to incite division by claiming that President Trump is a racist. They could not be more wrong."

Carson, a neurosurgeon known for performing the first successful separation of conjoined twins in 1987, referenced the rioting in response to the police shooting of Jacob Blake in Kenosha, Wisconsin.

"History reminds us that necessary change comes through hope and love, not senseless and destructive violence," Carson said.

Ja'Ron Smith, deputy assistant to President Trump, said he wishes everyone could see Trump's "deep empathy" to victims of violence.

He recounted his unlikely rise from a poor neighborhood in Cleveland to Howard University to the White House.

"Every issue important to black communities has been a priority for him," Smith said. "Prison reform. Rebuilding broken families. Bringing jobs back to America. Jobs in Cleveland. Jobs in Detroit. Jobs in Milwaukee."

Alice Johnson, who was pardoned by President Trump after her speech Thursday night, said she "hollered hallelujah" after Trump signed the First Step Act, which she said "brought joy, hope and freedom to thousands of well-deserving people."

A Tennessee grandmother, she was convicted on felony drug and money laundering charges in 1996. She was released after 22 years in prison when Trump commuted her sentence.

Johnson said she is "free by the grace of God and the compassion of President Donald John Trump."