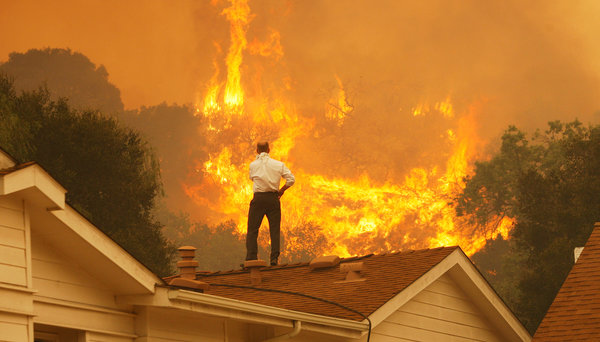 In the soft warmth of spring the swallows famously return to Capistrano, but in recent years they are followed by what seems inevitable summer power outages and fires. This is not as pleasant an experience for Californians as the return of our favored feathered companions.

Every summer, usually around this time of year, we get our inevitable heat waves. In the past, we used to endure them without fearing our lights --- and computers --- would be shut down, and our houses left in ruins.

No more. Almost every year we do not just have a fire season, we have a conflagration. Millions of acres get scorched across the state, accompanied by mass evacuations. Meanwhile, electricity is cut off to millions more, and the state, already reeling from an extraordinary economic decline, with the sixth highest unemployment rate among the states, continues its pell-mell rush into the 12th Century.

Why California Is Burning

As an old newspaper and TV reporter, I covered fires for many years and, in producing documentaries on past California disasters, secured historic footage of devastating fires as late as the 1960s. Yet what has changed is how we respond to natural disasters, often in ways that make them worse.

This is clear with the fires. California’s two last Governors, Jerry Brown and now Gavin Newsom, conveniently blame “global warming” for the massive destruction. But even granting that summer the temperatures have crept up, one would think this would lead to improved management of forests and brush --- after all it is science! But the green allies have long stood against the harvesting of dead trees and the aggressive clearing of bush and attempts to do so in 2016 were vetoed by Governor Brown. Money that could have gone for undergrounding electrical lines went instead to green energy schemes.

Overall, the state Legislative Analyst Office found, the fires were less driven by global warming, but by purposeful policies that allowed for the accumulation of fuel, as well a growing development in certain exurban areas, in part as a way to escape the extremely high housing prices along the coast. A 2018 Little Hoover Commission report similarly called for more aggressive forest management in the Sierra, an area that has been devastated in some fires. Last year’s fires cost the state economy $2 billion; we may surpass it this year. These fires are not great for the environment or for reaching the state’s super-ambitious GHG goals: According to the US Geological Service, the 2018 fires emitted roughly as much greenhouse gas as an entire year of electricity generation.

In 1968, Tom Wolfe wrote amusing about hippy movement in the Electric Kool-Aid Acid Test. Today the fodder for the risible has become, at least in California, the politically inevitable. Ever since muscle-bound Arnold Schwarzenegger found climate religion, the state has determined to push the green agenda to its fullest extreme. In a succession of regulatory moves, California has accelerated its detachment not only from fossil fuels, including natural gas, but the most reliable no-emissions electricity, nuclear power.

Yet at the same time as the state has subsidized massive increases in wind and solar power, it has also accelerated plans to electrify everything from home kitchens to buses, trucks and, of course, cars. All this at a time when power supplies are increasingly constrained. Elon Musk can build all the vehicles he wants --- increasingly outside California --- but how are they going to be powered and at what cost?

Well, we know the cost side all too well. State energy policies have made California gas and electricity prices among the highest in the nation, since 2011 electricity prices have increased five times as fast as the national average. In 2017 alone, they increased at three times the national rate. These prices have been devastating to poorer Californians, particularly in the less temperate interior where “energy poverty” has grown rapidly. This is no fluke; all countries that have adopted draconian “green” mandates --- Germany, Demark, even resource-rich Australia --- has experienced huge spikes in energy prices. In Europe, notes one study,  reliance on renewables both reduces incomes and boosts rates of household poverty.

Reliability, as we are now being reminded, is another problem. Due to our incessant need to proclaim climate virtue, Californians cannot provide reliable power when the sun goes down or the wind stops blowing, which helped precipitate the current blackouts. Solar production and wind are by nature intermittent. As a recent Massachusetts Institute of Technology (MIT) report suggests, over-reliance on renewables will continue to impose costs and threaten reliability, particularly without energy from other sources, such as nuclear plants.

Simply put, California energy policies are directly responsible for the blackouts, leaving state residents and businesses as vulnerable as Medieval peasants on the elements. The solutions being proposed to make up for shortfalls from closed nuclear plants are simply inadequate. Given the current rate of home construction, environmental activist Mike Schellenberger estimates it will take 100 years for rooftop solar facilities to match the current production of electricity from the state’s two slated-to-close nuclear plants.

Once California was an energy powerhouse, with nuclear, fossil fuel and hydro power needed to create the world’s fifth largest economy but now has become something like heroin addicts, dependent on injections, often quite costly, of imported energy from neighboring states, and, for crude oil, the enlightened nation of Saudi Arabia. If “green power” is the answer, and the future is “all-electric” we better get used to becoming more like Beirut than Paris.

Until we entered the age of saint Greta Thunberg, it was thought the primary task of a civilized society was to boost the prosperity, health, and safety of its denizens. But today there is little concern in California for such mundane things --- who needs a good job, reliable power, and a little spending money when there is a planet (not to mention political careers) to save.

Of course, not all animals suffer the same under this regime. California’s high energy prices --- and increasingly unreliable service --- have been particularly brutal for the heavily Latino working class, both in terms of jobs and costs who inhabit the state’s less temperate interior. These are the people who harvest our food, run the trucks from the Ports of Los Angeles-Long Beach to the rest of the country, and man the last battlements of the state’s energy staved manufacturing economy.

Indeed, an analysis by the Chapman Center for Demographics and Policy details how California’s draconian anti-climate-change regime has exacerbated economic, geographic, and racial inequality. One primary impact of climate regulations has been to chase away historically well-paying jobs in manufacturing, energy and home building, all key employers for working and middle-class Californians.

Unlike the working class, the oligarchs, and their allies in the clerisy --- state bureaucrats, non-profits, academia, and the media --- bear a far less extreme burden. State officials get to boss everyone around about their energy use while the tech oligarchs who dominate the state economy not only endorse but even profit from the state’s incessant climate virtue signaling. Renewable energy may be expensive and unreliable, but state policy enriches tech oligarchy's energy investments, even when their efforts --- like the Google-backed Ivanpah solar farm --- fail to deliver affordable, reliable energy.

The Cost of Deluded Intentions

Ironically, California’s efforts to save the planet have done little more than divert greenhouse-gas (GHG) emissions to other states and countries. Since 2007, when the Golden State’s “landmark” global warming legislation was passed, California has accounted for barely 5 percent of the nation’s GHG reductions; the state ranks a mediocre 40th in per capita GHG reduction over the past decade. As they demonstrate, state policies may be increasing total GHG by pushing people and industries to states with far less mild climates.

In contemporary California, results matter less than supposed good intentions. The fact that most of the state’s upper-class cluster along in the post-industrial, temperate zones of the state are far more able to withstand high gas and electrical prices, as well as the loss of key industries. Almost every day brings an announcement of firms packing up and leaving California. But if Apple, Google, Facebook remain ensconced here, albeit remotely from home, few state leaders seem to care.

The question now is how long Californians will put up with this. California is currently careening towards an economic disaster, a form of green Bolshevism that accepts no compromises. Yet over time, those high prices will impact not just these industries, but the rapidly departing tech sector; artificial intelligence and live-streaming providers are among the largest and fastest growing consumers of electricity.

State officials refuse to focus on these impacts. There’s a well-developed sense that anyone who dissents, even a scientist or respected economist, is a heretic not worth listening to, and should be de-platformed, as just happened to Mike Schellenberger, or even subject to legal persecution. This treatment is facilitated by a local media that tends to embrace the most apocalyptic projections of, for example, coastal erosion, with little attempt to actually ascertain the actual facts or look at alternative analyses.

Yet if the state’s media, academia, and political class worries about the death of our lovely planet, many ordinary Californians are more concerned with the declining realities of the here and now. Generally, dissatisfaction among Californians is particularly minorities and those in the inland regions, home to roughly a third of the state’s population. More Californians feel the state is headed in the wrong direction than the right one, according to a recent PPIC poll; nearly half, and more among African Americans and inland residents, are thinking of an exit notes a UC Berkeley survey.

The question is whether this dissatisfaction will register in Sacramento. Attempts to ban natural gas are being opposed not just by energy companies, but minority business owners, civil rights leaders, and blue-collar workers like truck drivers. Attempts to ban natural gas have elicited opposition from over 100 cities  with a total population of over eight million. The California Chamber of Commerce and the three most prominent ethnic chambers --- African American, Latino, and Asian Pacific --- have joined the drive. At the same time some 200 veteran civil rights leaders sued the California Air Resources Board, on the ground that state policies are skewed against the poor and minorities.

To be sure, the Golden State may be a long way from the French gilets jaune rebellion, but even Californians have their limits. They increasingly resent the grand hauteur and self-righteousness of the wealthy climate activists. In the Middle Ages, most parish priests and their communicants suffered great material hardship, while many bishops lived in luxury, “loaded with gold and clad in purple,” as Petrarch put it. Similarly, environmentalists aim to impose austerity on the masses while excusing the excesses of their ultra-rich supporters.

As we wait for the power to come back, or breath acrid smoke, the elitist hypocrisy and failed policies that California’s leaders have imposed on our population, and now seek to impose on the rest of the country, is becoming all too painfully obvious.

Joel Kotkin is the Presidential Fellow in Urban Futures at Chapman University and executive director of the Urban Reform Institute. His new book, The Coming of Neo-Feudalism, is now out from Encounter. You can follow him on Twitter  @joelkotkin.